Unveiling the AI element of the opening ceremony, Monkey King robot cheers for the Winter Olympics

The opening ceremony of the Beijing 2022 Winter Olympic Games was held at the Bird's Nest stadium on The evening of February 4. Shenzhen, as the only southern coastal city, held a celebration activity and interactive with the opening ceremony's hot performance through the way of connection. "Shenzhen Gift" wukong robot and other shenzhen science and technology elements appeared, with the innovative way of "Winter Olympics + fashion + science and technology" blessing the Winter Olympics, to deliver AI to the world.

As a young city of technological innovation, Shenzhen used robotics, drones, lasers and other elements for the opening ceremony of the Winter Olympics. The images of Bing Dwen dwen and Xue Rong Rong, the mascots of the 2022 Winter Olympic and Paralympic Games, glow in the night sky in Shenzhen. It is worth mentioning that, relying on the "Shenzhen gift" Wukong robot, Shenzhen also specially built the winter Olympics sports intelligent robot.

Wearing the traditional costumes of 56 ethnic groups, 56 Wukong robots performed a wonderful collective dance performance with their strong sense of life and expression. They also waved the flag of the Winter Olympics and cheered for the Olympic athletes.

Wukong robot is a skater and skater

On the stage decorated with flowers, waves and ice flowers, nine Wukong robots were turned into skaters and skaters, vividly displaying athletes' heroic attitude in ice and snow sports. Wukong's skis are also specially customized for this program, hand-painted skis created by a team of youbi.com technology designers combining shenzhen landmarks and technological elements. On the skis are pictures of shenzhen landmarks such as the Civic Center, Ping An Building and talent Park, as well as pioneer cattle representing the spirit of Shenzhen. In addition, the designers also drew lines with a sense of science and technology and space patterns. 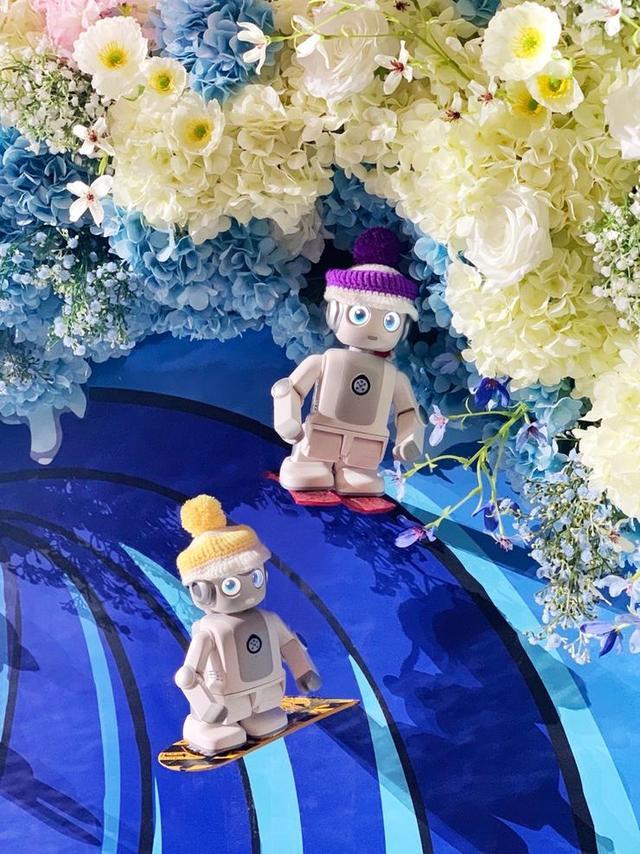 In the performance, Wukong robot has to perform the classic aerial skills of snowboarding and snowboarding. While taking into account the movements, the robot also needs to simulate the expressions of athletes during the competition and maintain stability, so that the movements are uniform and uniform.

Human-machine integration, for the post-Winter Olympics era to add imagination

As the first global comprehensive sports event to be held as scheduled since the outbreak of COVID-19, the Beijing Winter Olympics is not only a competitive event for outstanding athletes from all over the world, but also a stage to showcase scientific and technological innovations.

Spread from wisdom venue construction, the service safeguard to the tournament, artificial intelligence, robot, 5 g, cloud, the application of the technology such as 8 k everywhere, epidemic prevention, guide the robot, robot, logistics delivery machine, cooking robot, room robots and other kinds of service robots are employed, provide a contactless smart services, power games held smoothly. Many science and technology enterprises, including Youbiselected technology, have empowered the Winter Olympics with science and technology, not only allowing everyone to experience the power of scientific and technological innovation and share the achievements of the "Science and Technology Winter Olympics", but also injecting the power and vitality of scientific and technological innovation into the development of the ice and snow economy and promoting the sustainable development of the ice and snow sports.

Related news
A brief history of the Chinese AI company conference room
China Vows Full Carbon Neutralization for Beijing Winter Olympics
No wonder Winter Olympics athletes can't eat pepper
Unveiling the AI element of the opening ceremony, Monkey King robot cheers for the Winter Olympics
The closing ceremony of the Winter Olympics will once again present Chinese romance: Zhang Yimou spoilers for everyone to cross
Hot news this week
Biden signed a chip and scientific bill, a video call of WeChat iOS internal test suspension window, the advanced CPU caused Win11 to be difficult to use, Huawei new machines enter...
How to regulate the "broken card" operation to crack down on electrical fraud to prevent "accidental injuries" with cards?
Musk's eyes! Lei Jun released a full -size humanoid robot Xiaomi self -developed strength explosion table
iPad 10 will be absent from iPhone 14 conference: October appeared on Apple's last non -comprehensive tablet tablet!
The three major indexes of the US stocks opened sharply: ROBLOX fell more than 4%, Twitter and Tesla rose more than 3%
Kuaishou TOB business Yu Bing: Self -developed chips or mass production after the end of the year, the video must be turned into light industry
Meizu Pandaer Great: All products are reduced by 200 and 30 -containing mobile phone cases, heat dissipation back clamps
The global streaming media have increased the animation circuit is becoming a new "breakthrough" for Youaiteng
After selling Tesla for $6.9 billion, Musk said he was not selling it, but a survey said he was still selling it. The title of the world's richest man may not be guaranteed next ye...
Distributed database OceanBase announced 4.0 product release, single -machine deployment performance is super mysql
The most popular news this week
AMD Zen4 Ryzen Ultra HD: The Octalus
A PC processor more advanced than AMD's 5nm Zen4 is going to be a chip: Intel is jealous
First time in Shanghai! One billion electronic vouchers are coming: Alipay and wechat are available
The survey shows that nearly half of the US Android users consider changing Apple iPhone
New bottle of old wine! Industry insiders: No one has the best cost control than Apple
Amazon requires US regulators to withdraw votes: bypassing the company's harassment of Bezos to disturb operations
Pet dog infecting monkey acne suspected "Human Poor" American CDC Reform Control Guide
Space Launch System to Fly for First Time
Tencent's second-quarter net profit fell 56% from a year earlier to 18.6 billion yuan
Fabless customers cut back on chip orders affecting Q4 capacity utilization