Meta's market capitalization lagged behind NVIDIA for the first time, ranking 8th among the most valuable companies in the United States 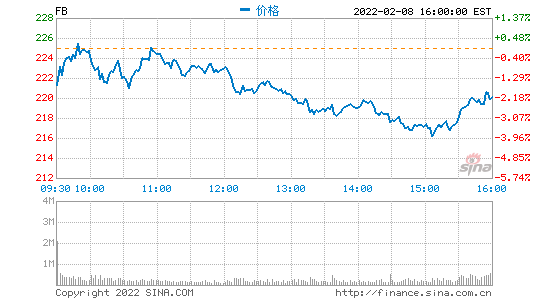 Check out the latest quotes

Sina Technology News On the morning of February 9, Beijing time, it was reported that Meta's stock price continued to decline, and its current market value was lower than that of chip manufacturer Nvidia.

On February 8, local time, Meta's stock price closed down 2.1% at $220.18 per share. The company's shares have fallen 35 percent so far this year and are currently at their lowest level since July 2020.

Not long ago, Meta joined Apple, Microsoft, Amazon and Alphabet among the top 5 in the US market capitalization. Today, Meta has fallen to 8th place, behind Tesla, Berkshire Hathaway and surpassed by NVIDIA for the first time.

On Tuesday, local time, Nvidia closed at $627 billion, while Meta's market value fell to $599 billion. It is followed by Visa, with a market capitalization of $478 billion.

Nvidia recently announced that it will terminate its acquisition of chip technology company Arm and will pay a $1.26 billion break-up fee to Arm's parent company, SoftBank. Nvidia dropped the deal in the face of major regulatory challenges, including an investigation in the UK and a lawsuit by the US Federal Trade Commission.

On Tuesday, Nvidia shares rose 1.5 percent to $251.08. Nvidia has been on the rise over the past two years, with the company's stock price up more than 300% since early 2020. Since the beginning of the year, the company's market value has shrunk by about 15% as investors dumped high-risk tech stocks.

Nvidia will announce its fourth quarter results next week. The company's chip sales were strongly boosted by strong demand for graphics processors in artificial intelligence applications and advanced video games.

And Meta's stock price has been falling since it announced its fourth-quarter results last week. The company faces a decline in the number of users and warns that Apple's privacy reforms will bring challenges. Meta's first-quarter forecasts fell short of expectations, causing its shares to fall a record 26 percent on Thursday.

Related news
@666 Join illuminati Kingdom in United Kingdom +27839387284
Strong Money Spells in United States (USA) | spiritual rats
here.@ ***
Yuan Cosmic bonus? Meta This profit engine is popular with capital market
Yahoo Finance's Worst Company of 2021: Meta Wins "Laurel"
Meta market value fell below $ 600 billion to reduce the eighth by British Weida
Meta's market capitalization lagged behind NVIDIA for the first time, ranking 8th among the most valuable companies in the United States
Meta may join Apple and Intel in selling corporate bonds for the first time
Facebook's parent company officially launched the META account as a new VR login method
Meta was ruled by the court to compensate 174 million US dollars: Facebook and Instagram infringement
Hot news this week
"GTA6" was stolen by a hacker without being released. How can the game company defend the source code?
The new rules of Internet popover will be implemented on September 30, and the chaos of "bully screen advertising" is expected to be eradicated
Google is shutting down its Stadia cloud gaming project, with the developers involved saying they had no knowledge of the plans
Brother sent a mobile phone to pay 200 yuan to pay the owner to the police: money is not scraped by the wind
Mate 50 Kunlun version is in short supply! Huawei additional production capacity: October supply can improve
IPhone6 officially "retired", its series sold 250 million units, second-hand purchase price is now as low as 100 yuan......
After a lapse of 28 years, the Chinese women's basketball team won the World Cup runner -up Li Meng's T -shirt on fire
Woman addicted to 'A Sheep' husband worried about being cheated to report for help: official confession
Apple responds to the iPhone accident monitoring cannot be triggered 100%: no minimum requirements are met
Meituan Wang Xing: Chinese auto companies will definitely win, "NIO, Huawei, ideal" will replace BBA to occupy the high-end market
The most popular news this week
Girls walk to play mobile phone hit telephone pole forehead bulge: hope friends learn a lesson
The Snapdragon 8 Gen2 flagship of the Year is here! The standard battery may not even be 4000mAh
Boot up is the new high-end flagship of Android 13 first look: performance is crushed by iP14
Are you enough? Microsoft announced that all compatible users can upgrade win11 2022
American Infrastructure Revival 8000M Fiber Broadband: The same speed, unlimited upward speed, unlimited
Brazil approves Activision-Blizzard deal
Apple doubles U.S. manufacturing: mostly small-scale test production, only Mac Pro assembled in the U.S.
EPIC CEO Angry Apple App Store price increase: Apple is like a landlord, developers have nowhere to go
Xiaomi Group: $ 117,000 repurchase 4,800 shares shares shares
Sub -iPhone 14! Huawei New Machine Release: Snapdragon U Blessing