It has to be said that the performance strength of the A15 is still very strong even now, although the new Galaxy S22 lineup represents one of the top flagship products of the current Android camp, but these devices still lag behind Apple's iPhone 13 series in the performance score test.

PCMag recently ran a score test on the new Snapdragon 8 processor that powers the Galaxy S22 and compared its performance to other popular Android devices and Apple's iPhone 13 Pro Max.

From the actual performance test, it can be seen that the Galaxy S22 Ultra has a single-core running score of 1232 and a multi-core running score of 3433 under the blessing of the new Snapdragon 8 processor, while the corresponding iPhone 13 Pro Max single-core and dual-core are 1735 and 4647, respectively, if the corresponding multi-core part, Apple is at least 35% faster. 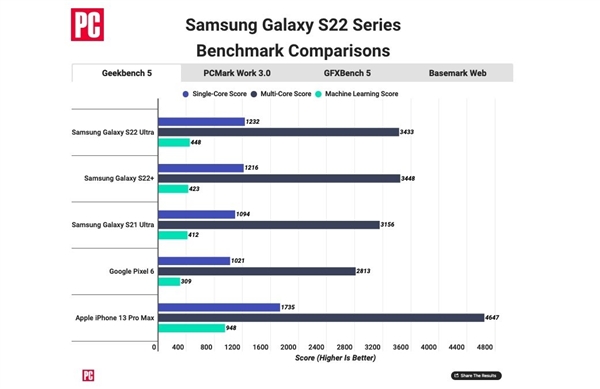 In the Geekbench ML (Machine Learning) test, the iPhone 13 Pro Max equipped with the A15 Bionic achieved 948 points, while the corresponding Samsung only scored 448 points, after all, the A15 has a 16-core neural engine that can perform 15.8 trillion operations per second for machine learning tasks.

In fact, it can be seen from the above tests that A15 still has the strongest performance at present, and Apple's lead is still quite large. And with the advent of the new A16 Bionic chip, Apple's devices are likely to remain the fastest smartphones on the market for some time. 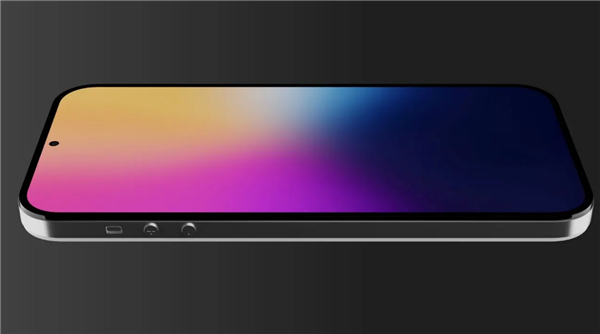 Related news
The latest news of iPhone 13: the first A15 processor and Apple's reduced bangs
According to the news, TSMC has begun to produce A15 processor for iPhone 13: more than last year
IPhone 13 starts! Apple releases a large number of A15 orders: enhanced 5nm process
AnandTech test: The A15 chip is faster than Apple officials claim
Screen crush iPhone 13! Samsung S22 exposure: super narrow frame, 4 sides of the same width
A15 is still silent! iPhone 13, Samsung S22 performance comparison: miserable
Apple's iPhone 13 VS Samsung's S22
Samsung's new flagship Galaxy S22 flipped over as soon as it hit the market: can it still become an iPhone rival?
The small screen of the flagship battery life to foreigners surprise: better than the iPhone 13 and Samsung S22
Why is IP14 still used the A15 chip? Industry insiders: Android machines are too weak
Hot news this week
During the quarter, we signed a multi-year intellectual property patent licensing agreement with a major licensee. This positive result enables us to obtain more 5G patent licensin...
Win10 digital version will be discontinued: free whitewash is still available Microsoft has not been under the dead hand for 7 years
Microsoft posted $17.4 billion in non-GAAP net income on revenue of $52.7 billion in the second quarter of fiscal 2023
YouTube complained about: using offline return-to-work policy to illegally block contract workers from unionizing
India receives Radio Signals from Galaxies 9 billion light-years Away Astronomers: Aliens not involved
Beautiful country semiconductor ushered in the winter, US high enterprises inverted, our country market doesn't buy it!
Cybertruck skipped tickets again! Mass production of Tesla electric pickup truck will not wait until 2024.
Apple will relax measures to deal with COVID-19 's epidemic and encourage employees to go back to work
Huawei P60 Pro latest configuration chart revealed: variable aperture and satellite communications are on the list
Intel: 14 generations of Core in the second half of the year, and build a new architecture from zero next year.
The most popular news this week
The iPhone is No. 1 in China! Why do people prefer Apple to Android?
China develops starch and protein synthesis technology for corn stover: Costs drop dramatically
Technology tree point crooked? Toyota's new patent: hold the door handle can be sterilized
Eight satellites in eight hours! China rushed to Venezuela's relief efforts
Apple bet on mixed reality, but the selling point of the product is not enough.
Baidu is reported to launch an AI chat robot service similar to ChatGPT in March this year.
The most powerful SSD becomes the last song Intel retired Aoteng hard disk: 6 years of performance is still leading
Don't wait for the entry-level Tesla! Extreme Krypton 003 prototype revealed: or 160,000 starting price
Apple's car accident detection function has been misreported constantly, and the rescue department has been tortured.
To accelerate electrification, Honda China's technical research Technology and production technology companies merge