Baidu is stepping into the same river again?

On March 1, Baidu released the financial report for the fourth quarter and full year of 2021, looking at the financial situation of the year, it can be said that Baidu once again stands at a key node of business transformation. 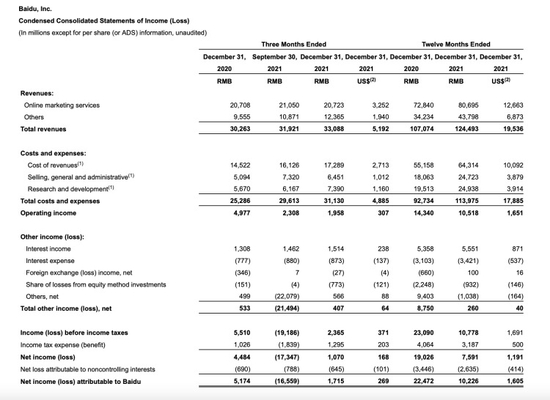 In the past few years, Baidu has been emphasizing the opening of the second and even third growth curves, trying to break the single model of advertising as the main source of revenue, and vigorously developing new technology-driven businesses such as AI, cloud computing, and automatic driving.

At the beginning of the epidemic, Baidu's online marketing business had a period of plummeting experience, and then with the recovery of social economy, Baidu's online marketing business grew rapidly, and now after it has returned to a historical high level, the online marketing business has not moved, and the growth rate has been as low as 1% in the fourth quarter of this year. This is not a problem faced by Baidu, the recent Internet advertising as an important source of income of the company, Byte, Tencent, etc. are facing the problem of slowing down the growth rate, which also shows that the Internet traffic dividend is indeed exhausted, no matter how the impact of the epidemic, the cold winter of Internet advertising has arrived.

Baidu's new business has grown rapidly, and Baidu Chairman and CEO Robin Li also stressed in the conference call: "The non-advertising business has grown strongly, especially the intelligent cloud business. "However, Baidu's expenditure on new business is also very large, baidu core research and development expenses in 2021 are 22.1 billion yuan, accounting for 23% of core revenue, an increase of 2.6 billion yuan compared with 19.5 billion yuan invested in 2020, and Baidu's core research and development expenses account for 21.4% of core revenue in 2020."

Obviously, Baidu's basic business structure can be seen as the high investment in technology for advertising business revenue to support new business, which is the key to transformation, but it also means that both sides of the business cannot drop the chain.

However, today's status quo is that at the blood supply end, Internet advertising into the winter is already a well-known thing, and behind the seemingly high growth rate of this financial report, the greater trend of cloud computing and automatic driving in the two industries makes Baidu's transformation more worrying - this growth is because the starting point is not high enough, or it really broke through the critical point, which is the place where the outside world hesitates.

Cloud computing is an industry with obvious first-mover advantages, Baidu as a technology start-up company but late in entering the game, and slow to sort out the corresponding talent structure and market strategy, according to the latest data report released by IDC, Alibaba Cloud market share in the third quarter of 2021 was 38.24%, ranking first; Tencent Cloud market share was 10.92%, ranking second; HUAWEI CLOUD market share was 10.74%, ranking third, and Baidu Intelligent Cloud was 3.97% the market share is in the second echelon of the cloud market. Judging from industry data and recent conditions, the gold mining tide stage of "all players rising together" in the cloud market has passed, and the customer structure has begun to change, and the increase is more from the traditional industry to the cloud. 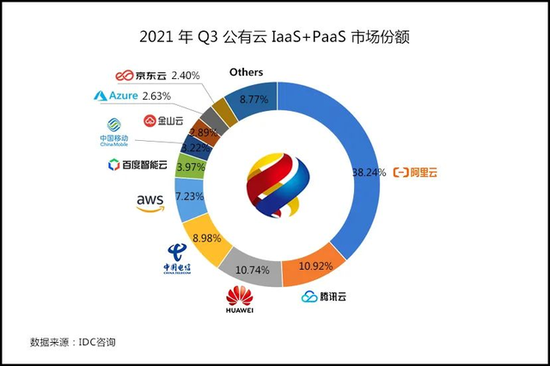 This also means that the corresponding profit margin is reduced, and the more cautious traditional industries can provide more expandable customers due to wider coverage, but they are obviously not as much as the Internet customers," and high growth may not bring the same growth rate of profits.

Autonomous driving is a loss-making and revenue-flying business, and a stable profit model of relying on automatic driving itself has not yet been found.

Behind Baidu's incessant multi-point blossoming self-driving taxi business, the day when these points will eventually connect to form a large area that can be operated on a large scale is still far away. The establishment of Jidu also shows that Baidu also understands that "car-making" is a more reasonable model for commercializing technology, but compared to many opponents, Baidu, which was originally closer to the smart car market, is obviously slow, once again from the possible guide position to a follower, Jidu's concept car will be unveiled this year, next year may be mass production, like possible subsidies reduction, lack of core unresolved problems will bring what impact this year, are further restricting the rapid self-hematopoietic ability of these new businesses.

Baidu calls artificial intelligence and cloud business the "second growth curve", but it is clear that the future of this second line depends largely on how long the first line can be bent, and the reality is that Internet advertising has entered the winter mode in the short term, but this new curve "growth" is not only revenue, but also cost input and corresponding losses, this quarter R & D expenses increased by 30% year-on-year, exceeding the speed of revenue growth, profits fell by 39% year-on-year. But the window of transformation is always short-lived, and after this high growth, the proportion of cloud computing and autonomous driving-based new businesses in core revenue is still only 26.5%.

From the environment of the Internet industry to the competitive status of cloud computing and autonomous driving, it is obviously not a good time to turn profits and losses forward.

All this seems to be another version of the story staged by Baidu in the early days of the arrival of the mobile Internet, the slow choice, the business complementary relationship of the screw, and watching the door slowly closed, does Baidu want to step into the same river for the second time?

Related news
Hot news this week
During the quarter, we signed a multi-year intellectual property patent licensing agreement with a major licensee. This positive result enables us to obtain more 5G patent licensin...
Win10 digital version will be discontinued: free whitewash is still available Microsoft has not been under the dead hand for 7 years
Microsoft posted $17.4 billion in non-GAAP net income on revenue of $52.7 billion in the second quarter of fiscal 2023
YouTube complained about: using offline return-to-work policy to illegally block contract workers from unionizing
India receives Radio Signals from Galaxies 9 billion light-years Away Astronomers: Aliens not involved
Beautiful country semiconductor ushered in the winter, US high enterprises inverted, our country market doesn't buy it!
Cybertruck skipped tickets again! Mass production of Tesla electric pickup truck will not wait until 2024.
Apple will relax measures to deal with COVID-19 's epidemic and encourage employees to go back to work
Huawei P60 Pro latest configuration chart revealed: variable aperture and satellite communications are on the list
Intel: 14 generations of Core in the second half of the year, and build a new architecture from zero next year.
The most popular news this week
ChatGPT after global explosion: Baidu announces similar AI service to be launched in March
Lei Jun announced the first major event at the beginning of the year: it is critical to Xiaomi!
Carry the cauldron! Three out of ten divorces are linked to one partner's addiction to their mobile phone, research suggests
The iPhone is No. 1 in China! Why do people prefer Apple to Android?
China develops starch and protein synthesis technology for corn stover: Costs drop dramatically
Technology tree point crooked? Toyota's new patent: hold the door handle can be sterilized
Eight satellites in eight hours! China rushed to Venezuela's relief efforts
Apple bet on mixed reality, but the selling point of the product is not enough.
Baidu is reported to launch an AI chat robot service similar to ChatGPT in March this year.
The most powerful SSD becomes the last song Intel retired Aoteng hard disk: 6 years of performance is still leading