The reference news network reported on March 6On February 9, the website of popular science published an article titled "NASA has a space farm plan", written by Tatyana Woodell. The full text is excerpted below:

Building a vegetable garden in space isn't easy — but for astronauts, growing crops isn't just about talent, it's almost a requirement.

On the International Space Station, the history of cultivating plants is short but interesting. As astronauts gradually transition to long-term life independent of Earth, it becomes all the more necessary for them to have the ability to meet their nutritional needs in orbit.

In an emailed statement, NASA said: "Small-scale projects on the space station today focus on conducting primary research related to crop growth and performance. These projects will serve as a springboard for the development of fully functional, operational crop production systems that will accompany astronauts in the future. ”

However, current efforts to produce space crops on a large scale face many challenges, including high costs, logistical difficulties and technology gaps. A new Article published Feb. 4 in the Swiss journal Frontiers in Astronomy and Space Science argues that in order to overcome some of these hurdles, new advances in automation, robotics and even machine learning are necessary.

Prepackaged food spoils over time, and it can take too long to get any supplies from Earth to potential lunar or Martian settlements, so it's more feasible to invest human and material resources to keep the crew healthy in real time.

Simon Gilroy, a professor of botany at the University of Wisconsin-Madison, said: "It is too costly and difficult to continuously provide food, oxygen and everything needed to sustain human survival. ”

Gilroy was not involved in the study. He believes that space is a "magical" place for living things, which is one of the reasons why space offers a great opportunity to study the evolutionary record of plants and humans.

But in part, NASA's keen interest in astrobotany— which studies how plants interact with the space environment— stems from lessons learned from the history of piracy. Centuries ago, when adventurous explorers sailed at sea, many would die of scurvy, a severe deficiency of vitamin C.

This important vitamin is an important nutrient that keeps humans healthy. Citrus fruits are rich in vitamin C. Although astronauts can take vitamins every day without having to go to great lengths to grow hard-won lettuce, plants can greatly benefit mental health in addition to nutritional benefits.

An article published in the journal Frontiers in Astronomy and Space Science also points out that by utilizing hyperspectral imaging technology, a technology that can capture and process large amounts of information from various bands of the electromagnetic spectrum, scientists can develop an accurate monitoring system for plant health. The system can collect data to ensure food safety by automatically monitoring plant health and alerting astronauts to early plant diseases, droughts or microbial infections.

A prototype of the system is already in development at the John F. Kennedy Space Center. It was also used to create a database of plant images for astronauts to refer to when determining plant irritants.

NASA hopes that these and similar systems will be used in the future to help train AI algorithms that can be used on the International Space Station and the Gateway space station. The Gateway space station, part of NASA's Artemis lunar landing program, will be an outpost for lunar flights. But NASA said: "More work needs to be done before we can be confident that the astronauts we send to Mars will have a healthy, fully functional food system to accompany them on their journey." ”

NASA, together with the U.S. Department of Agriculture, is also working on how to use micro-seedlings. Micro seedlings are small, nutrient-rich plants that can be easily cultivated and eaten without the need for excessive effort on board. A number of space crop research projects are also underway, including the "vegetable production system". This is a vegetable garden on the International Space Station, where astronauts study the effects of microgravity on plants.

Another research project is called "Advanced Plant Cultivation Environment". It is a fully automated growth system for harvesting crops, as well as conducting real-time research on crops. As a result of these and similar programs, NASA has become a pioneer in space crop research and solutions.

A recent example is the "O'Haro 3" system. This is a prototype of a crop production equipment. The facility will serve as a platform to test new technologies for plant cultivation, allowing advanced water supply concepts to be tested. The device will also allow astronauts to pick and eat a variety of "salad crops."

Still, Gilroy said, it will take time for large-scale crop cultivation in space to become a reality. However, the space crop program in the coming decades will lay the foundation for the smooth development of future generations. 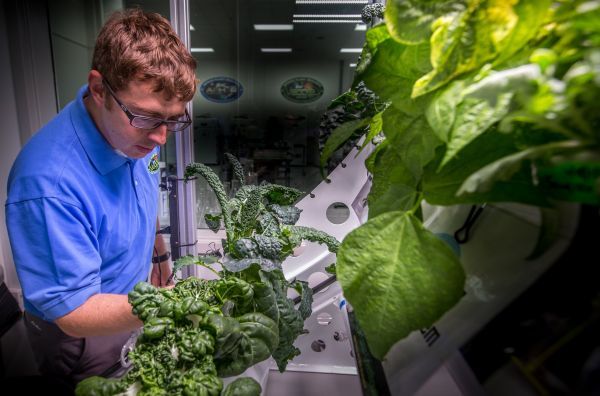 The researchers work in the vegetable laboratory at the processing facility of the John F. Kennedy Space Center space station. (NASA website)