Sensor Tower: in March, 38 Chinese companies were listed among the TOP100 mobile game publishers by revenue 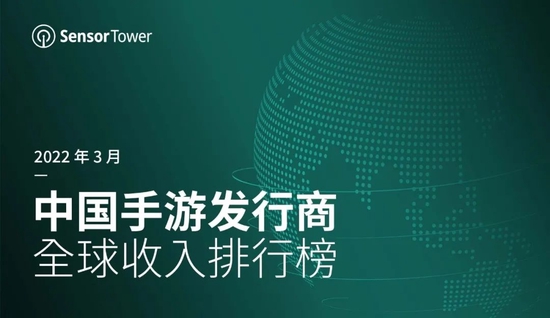 With the release of Original God version 2.6 and the launch of new five Star characters, Miha's revenue in the mobile market increased by 18% month-on-month in this period, and it returned to the third place in the global mobile game publisher revenue list. Together with Tencent and NetEase, The top three mobile game publishers in March were once again dominated by Chinese players.

This period of 37 mutual Entertainment's mobile game revenue growth across the board, making the publisher's revenue increased by 11%. Among them, "Song of Cloud Shangcheng" achieved reverse growth half a year after its launch in South Korea by virtue of its in-depth localization. In addition, its popularity in The Japanese market gradually increased, and the game revenue increased by 27% quarter-on-quarter, hitting a new high.

Thanks to the limited time of Flower Festival on March 11, Thunder Games' Mobile game "One Mind Happy," which placed fairies, saw its revenue rise 23% quarter-on-quarter, setting a new revenue record a year after its launch. Meanwhile, the ask, which is about to celebrate its sixth anniversary on the market, saw a 62 per cent quarter-on-quarter increase in revenue in the current period. With these two titles, Thunder moved up three places and returned to the top 10 grossing publishers.

Perfect World launched "Dream New Devil" in The middle of March in Taiwan, Hong Kong and Macao, China, and its products such as "Phantom Tower" and "Devil" increased revenue in the Chinese market. The publisher's revenue in this period increased by 31% from the previous month, ranking the 20th in the list.

The empire simulation mobile game "King's Choice", owned by Longteng Jane, has achieved rapid revenue growth for 10 consecutive months since its launch last year. This period saw another sequential growth of 26%, making the publisher ranking rise 3 places to the 23rd. 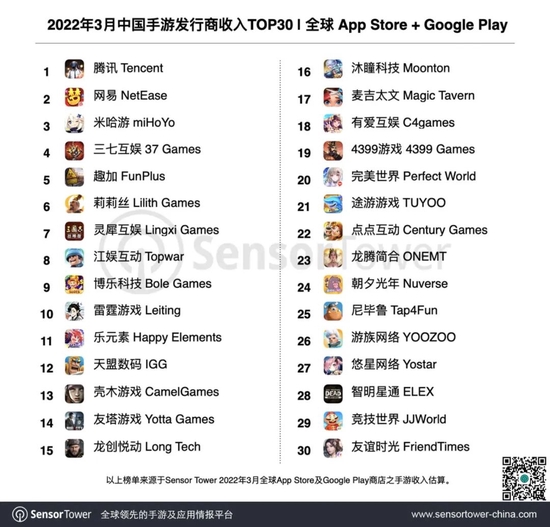 After the successful launch of the 2-dimensional mobile games "RO Wonderland: Birth of a New Generation" and "High Power Team", In mid-March, Morning Light Year released the Dark Wind ARPG mobile game "Dark Nemesis: Infinite Quest" overseas. At present, this product, which is aimed at the medium and heavy mobile game market, has a five-star praise rate of more than 85% in the United States and Southeast Asia, and its follow-up performance is worth looking forward to.

Thanks to a large number of new content launches such as Charlotte Skin, Tencent's Honor of Kings revenue grew 20 percent month-on-month in March, making it the second-highest grossing month since its launch, behind Only June 2021.

Amid the pandemic, board games continue to enjoy dividends in both domestic and overseas markets as offline social networking remains restricted. In this issue's list, the revenue of the two chess and card player travel game fishing Battle and the competitive world JJ Douzhu increased by 29% and 59% respectively, both hitting record highs. 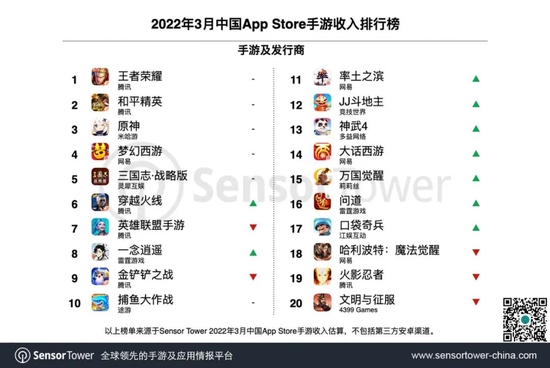 Related news
ICML 2019 paper admission Top100: Google
Top 100 mobile app subscription revenue in the US jumped 21% in 2019, with a turnover of US $4.6 billion
Jay Chou has topped Apple Music's TOP100 list
Sensor Tower: January 2022 China's mobile game list "Original God" won the overseas mobile game revenue championship
Sensor Tower: in March, 38 Chinese companies were listed among the TOP100 mobile game publishers by revenue
Sensor Tower: In March, Douyin and TikTok attracted nearly 2 billion yuan of global gold, and 45.6% of their revenue came from China
Sensor TOWER in September 2022 Chinese mobile game publisher global revenue rankings: Tencent, Netease, Miha travel positions in the top three
Sensor Tower: Metro Parkour tops the list of TOP10 mobile games downloaded in September
Sensor Tower: Instagram became the world's top mobile app (not game) download in October
Hot news this week
With the NIL technology, Canon wants to provide China with a lithography machine comparable to the EUV
The Long March 9 is basically confirmed: the low-orbit carrying capacity of 150 tons can carry the entire space station into space
A small plane in the US has crashed into a 30-metre high voltage power line and got stuck: 80,000 people affected
Alibaba launched a new cross-border e-commerce platform in Spain, aiming to operate independently in the middle and high-end market
Can recording others' wechat chat records be used as evidence? The Beijing Internet Court has an answer
Google is concerned that Microsoft's acquisition of Activision Blizzard will affect the ChromeOS experience
When pure water is used in China team to solve the problem of seawater hydrogen production: it is expected to become an original industry
It's not just Huawei! Beidou has penetrated more than 20 industries and applied more than 15.5 million products
The second generation Snapdragon 8 flagship! Mi 13 toughened film appeared: four sides and other narrow screen accounted for a stable ratio
A Tesla crashed into two cars in Taizhou, Zhejiang province, killing two and injuring one, police said
The most popular news this week
Intel says key issues with U.S. chips have been resolved
RTX 4090 card into PPT 3A game masterpiece apology urgent update patch
Transsion will be holding a launch event in Dubai in addition to mobile phones and laptops
The first Snapdragon 8 series phone in the popular colors of 2023 hits the shelves: a stunning 5600 yuan design
Why do laptops need more memory?
Increase production capacity! Apple speeds up iP14 Pro shipments: Arrive as soon as New Year's Day 2023
What a fan! Netizens spend ten thousand yuan to get three mobile phones at once: beautiful
A bachelor's degree is needed for a New York City rat control manager who earns 1.2 million yuan a year
4090/80 Take that! Third party pre-orders for AMD RX7900: The most expensive over 11,000
Mi 13 series press conference preview: It is likely to start 3999