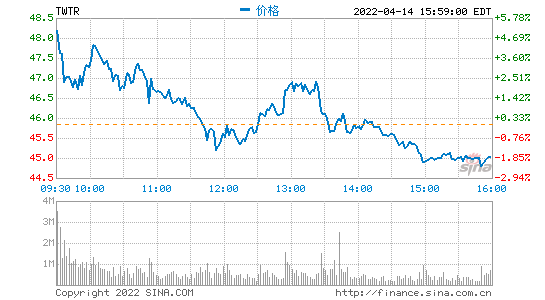 Check out the latest quotes

The bank downgraded Twitter from "neutral" to "sell" and reiterated its $39 price target, meaning the company could fall about 18 percent from its current level. As of Thursday's U.S. stock close, Twitter shares were down 1.68 percent and up 3.5 percent after hours. 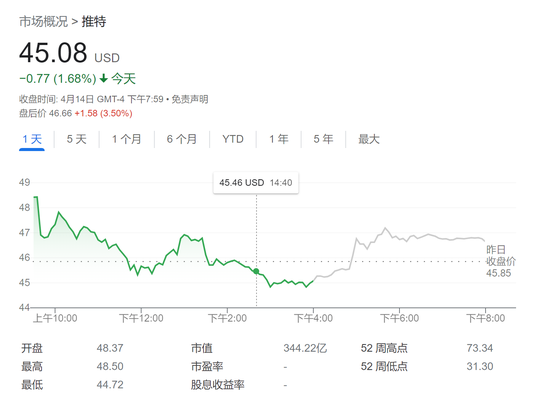 On Thursday, Musk offered to take Twitter private at $54.20 per share. Just a few weeks ago, he disclosed that he owned 9.2 percent of the company.

"We believe that this [Musk's purchase price] sets a short-term cap on the stock price, takes the company out of fundamentals, and creates significant downside risks if Musk decides to abandon the takeover offer or reduce his stake," Kelley said. ”

Given that Musk made it clear in his filing with the U.S. Securities and Exchange Commission (SEC) that $54.20 per share was his "best and final offer," the possibility of Musk abandoning the Twitter merger is real if Twitter doesn't work with Musk to close the deal.

Kelly explains, "Either the company goes private for $54.20 so you get a 15% premium, or the bid is rejected and Musk sells his stake and the stock goes down sharply." ”

In addition to Musk's dramatic move, Stifel believes there is still a risk that Twitter will be able to meet its set goal of monthly daily active users.

In the farce that Musk initiated, Stifel's judgment on Twitter's stock price was the exact opposite of what Wedbush analyst Dan Avis had expected. Ives believes a deal could be struck between Twitter and Musk that, if not, could prompt the company to seek a sale to someone else.

Related news
Wall Street investment bank downgrades Twitter rating: "Musk farce" threatens to plunge stock price by 18%
Musk spent $43 billion to buy Twitter, what else is uncertain?
Musk tweeted a veiled hint of a takeover offer for Twitter
$46.5 billion financing commitment letter arrived! Musk is considering making a takeover offer for Twitter
Investors are worried that Musk is abandoning the privatization deal: Twitter shares hit a new recent low
Twitter "abandoned" by Musk
Hot news this week
Kuaishou launched a self-developed cloud intelligent video processing chip: The chip has been streamed successfully
Ministry of Public Security: Single telecommunications network fraud continues to cause 40 % of all electrical fraud cases
Special price "kill ripe"? Bike-sharing platforms have different prices for the same package for different users
A tech company in Shanghai has been fined 220,000 yuan for swiping orders to improve its ranking on Yelp
Text message color, picture quality compression! Google calls out Apple for improving cross-device messaging
Alibaba: Shareholders SoftBank will settle in advance for advanced payment in advance involving a maximum of about 242 million ADR
It is also the collapse of the mine card: NVIDIA graphics card plummeted, AMD graphics card increases against the trend
Gaming phones also have optical shake protection: a 50-megapixel large-background master camera on the Rescuer Y70
Musk's eyes! Lei Jun released a full -size humanoid robot Xiaomi self -developed strength explosion table
Biden signed a chip and scientific bill, a video call of WeChat iOS internal test suspension window, the advanced CPU caused Win11 to be difficult to use, Huawei new machines enter...
The most popular news this week
Economic Daily: US Chip Act will not stop China Chip!
Because of violating consumer law, Google was fined about 288 million yuan
Global e-commerce revenues may shrink for the first time
Apple's M2 processor is coming down: The iPad Pro 2022 is scheduled to ship in October
Are the suitcases hot? Meteorologist alert, the climate crisis is here!
Has been taken 4 pins, the new crown vaccine, the American Pfizer CEO is positive: taking special effects medicine
A fire broke out in Nintendo Japan headquarters, and the news said that it was caused by the charging electronic device
YouTube has been revealed as early as this fall to launch an online store to support streaming platform subscriptions
Video game company Unity rejected AppLovin's $17.5 billion takeover offer
Huawei Mate 50 series first emergency mode: can make phone calls and scan when the battery is exhausted