The "Musk Acquisition of Twitter Incident" that recently swept the financial technology page added new trends after Musk released two mysterious and obscure tweets this week, "Love Me Tender" and "is the Night". 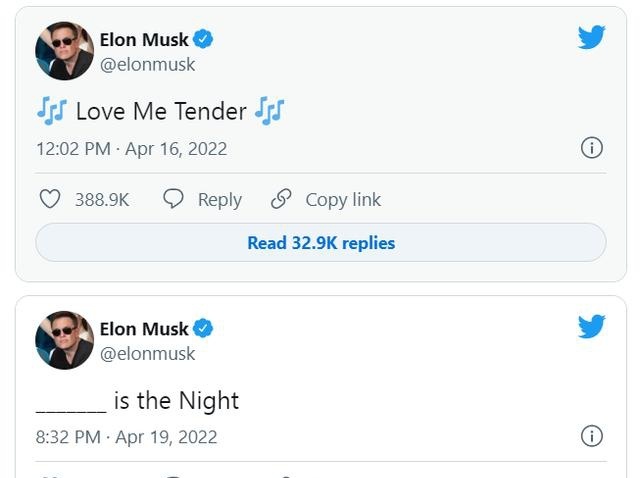 On Thursday, April 21, EST, according to a new U.S. securities filing, Tesla CEO Musk is studying whether to start making a takeover offer for U.S. social platform Twitter to acquire Twitter stock at $54.20 per share (or about $43 billion), and the proposal will depend on completing financing and due diligence, rather than the original financing.

The document states,Musk has received approximately $46.5 billion in financing commitment letters from Morgan Stanley, Bank of America and Barclays.Societe Generale, Mizuho and BNP Paribas are also involved. But Musk has yet to determine whether he will make a takeover offer to Twitter or whether he will take other steps to move the proposal forward. 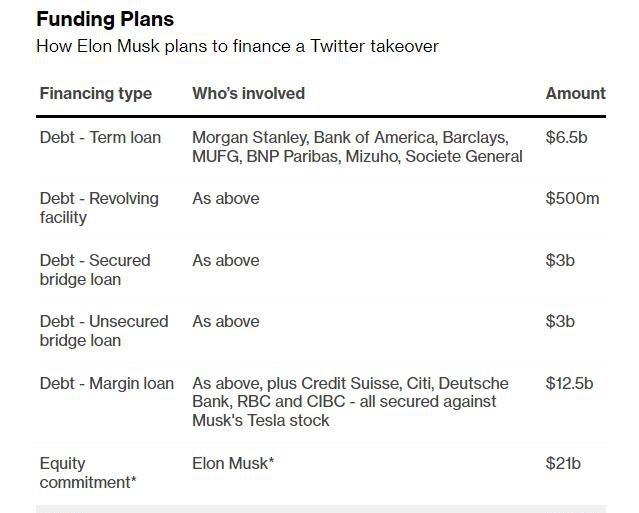 Musk currently has about $3 billion in cash or other somewhat liquid assets after spending $2.6 billion on a 9.1 percent stake in Twitter in recent months, according to Bloomberg calculations. It's unclear whether Musk will sell tesla-owned shares to buy Twitter, but according to sources, Musk is still considering bringing in potential equity partners and has spoken to some interested investors.

Twitter responded on the same day that it had received Musk's "latest, non-binding proposal" that "provides additional information about the original proposal and new information about potential financing" and that Twitter will conduct a careful and comprehensive review to determine what it believes is in the best interests of the company and all Twitter shareholders. But people familiar with the matter say Twitter is still likely to reject its bid in the coming days.

Meanwhile, Musk said he is considering launching a bid offer because he has yet to receive feedback from Twitter's board on his bid. According to documents filed Thursday, he is seeking negotiations on a definitive deal to buy Twitter and is prepared to begin such talks immediately. Previously, Musk had said his first offer was his "best and final offer."

Last week, Musk proposed to buy Twitter at $54.20 per share, and Twitter passed its "poison pill plan" on April 15, local time, to resist the acquisition intention. Wall Street Insights earlier article analysis said that Musk needs a total of $43 billion to fully pocket Twitter, even if Musk already holds 9.1% of Twitter's stock, Musk also needs $36 billion of funds can only be out of his own pocket - to reduce Tesla and SpaceX shares, or to pay friends - through private institutions to raise funds.

Twitter shares were pulled higher in early trading thursday after falling more than 2 percent at one point, closing up 0.73 percent at $47.08, below musk's proposed price of $54.20. 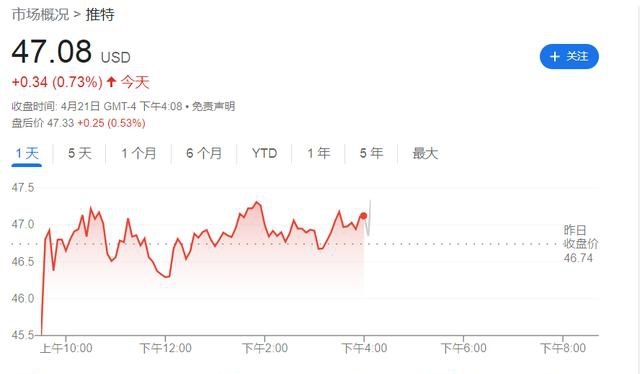 Related news
Invest in Twitter to become the largest shareholder! Musk's purpose is about to be achieved
Wall Street investment bank downgrades Twitter rating: "Musk farce" threatens to plunge stock price by 18%
Musk spent $43 billion to buy Twitter, what else is uncertain?
Some Twitter users have shown an edit button but changes to tweets will fail to be sent
$46.5 billion financing commitment letter arrived! Musk is considering making a takeover offer for Twitter
Mask acquired Twitter Mystery: How to make up $ 21 billion fund gap?
Twitter "abandoned" by Musk
Hot news this week
Kuaishou launched a self-developed cloud intelligent video processing chip: The chip has been streamed successfully
Ministry of Public Security: Single telecommunications network fraud continues to cause 40 % of all electrical fraud cases
Special price "kill ripe"? Bike-sharing platforms have different prices for the same package for different users
A tech company in Shanghai has been fined 220,000 yuan for swiping orders to improve its ranking on Yelp
Text message color, picture quality compression! Google calls out Apple for improving cross-device messaging
Alibaba: Shareholders SoftBank will settle in advance for advanced payment in advance involving a maximum of about 242 million ADR
It is also the collapse of the mine card: NVIDIA graphics card plummeted, AMD graphics card increases against the trend
Gaming phones also have optical shake protection: a 50-megapixel large-background master camera on the Rescuer Y70
Biden signed a chip and scientific bill, a video call of WeChat iOS internal test suspension window, the advanced CPU caused Win11 to be difficult to use, Huawei new machines enter...
Musk's eyes! Lei Jun released a full -size humanoid robot Xiaomi self -developed strength explosion table
The most popular news this week
Economic Daily: US Chip Act will not stop China Chip!
Because of violating consumer law, Google was fined about 288 million yuan
Global e-commerce revenues may shrink for the first time
Apple's M2 processor is coming down: The iPad Pro 2022 is scheduled to ship in October
Are the suitcases hot? Meteorologist alert, the climate crisis is here!
Has been taken 4 pins, the new crown vaccine, the American Pfizer CEO is positive: taking special effects medicine
A fire broke out in Nintendo Japan headquarters, and the news said that it was caused by the charging electronic device
YouTube has been revealed as early as this fall to launch an online store to support streaming platform subscriptions
Video game company Unity rejected AppLovin's $17.5 billion takeover offer
Huawei Mate 50 series first emergency mode: can make phone calls and scan when the battery is exhausted