The US SEC has pulled the list again, and 17 companies such as Zhihu and Luckin are listed! Fang Xinghai: The negotiations between China and the United States are progressing very smoothly

According to the surging news, on April 21, the SEC added 17 companies such as Ideal Automobile, Best Group and Shell and Zhihu to the "pre-delisting" list, which is also the fifth batch of Chinese stock companies to be included in the list since March. The SEC claims that the deadline for the 17 companies to submit their defenses is May 12, local time. 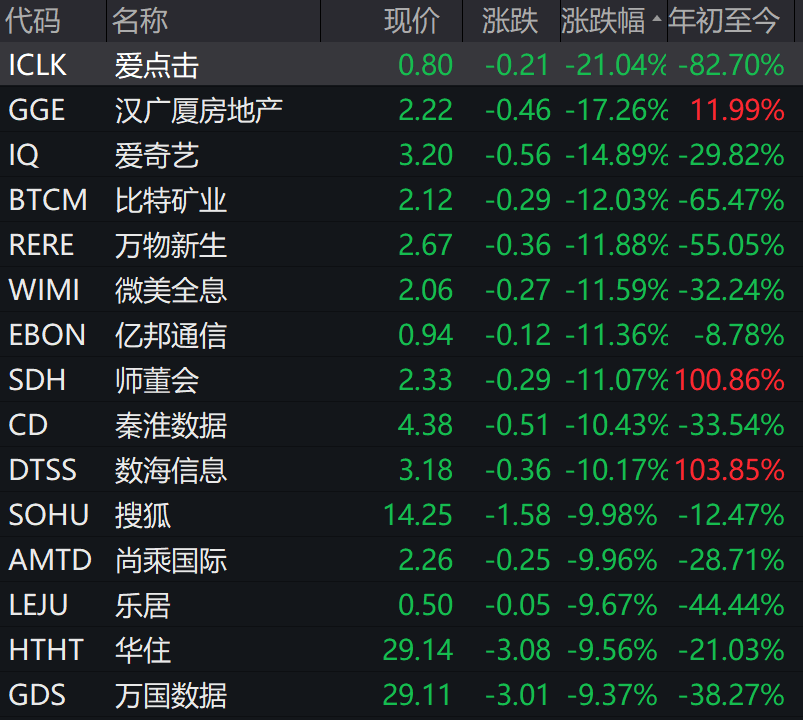 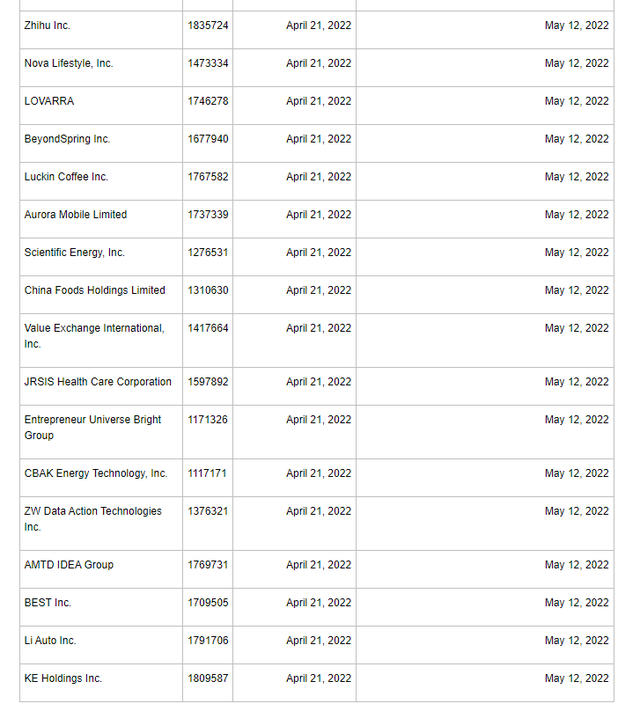 The SEC claims thatThe deadline for the 17 companies to submit their defenses is May 12, local time。

On April 22, Shell Holdings Limited (NYSE:BEKE) was added to the Foreign Companies Accountability Act (HFCAA) by the U.S. Securities and Exchange Commission (SEC) on April 21, 2022, EST.

The determination is an administrative measure taken by the SEC under HFCAA to indicate that the SEC has determined that the Company has used a fiscal 2021 audit report from an auditor that is currently unable to review the audit papers by the U.S. Public Corporations Accounting Oversight Board (PCAOB).

Under HFCAA rules, the SEC will prohibit the trading of company stock or American depositary receipts on U.S. stock exchanges or over-the-counter markets under HFCAA, and annual audit reports issued by auditors that have not been reviewed by the PCAOB for three consecutive years.

In response, shells looking for a room to respond,The Company has been actively seeking possible solutions to maximize the protection of the interests of shareholders。 The Company will continue to ensure compliance with relevant U.S. and Chinese laws and regulations and, where possible, maintain the Company's status as a public company on the New York Stock Exchange.

In March, the U.S. Securities and Exchange Commission (SEC) website published a list of five Chinese companies. Based on the Foreign Companies Accountability Act (HFCAA), the SEC has the power to delist a foreign public company from the exchange if it fails to file a report required by the U.S. Public Company Accounting Oversight Board for three consecutive years, SEC said. In this regard, on March 11, the China Securities Regulatory Commission responded late at night, saying that we respect the supervision of relevant accounting firms by overseas regulators in order to improve the quality of financial information of listed companies, but resolutely oppose the wrong practice of some forces to politicize securities supervision.

square Xinghai: Negotiations between China and the United StatesProgress is very much smoothly

Brokers: The return of Chinese stocks is still the trend of the times

On April 21, during the 2022 annual meeting of the Boao Forum for Asia, Fang Xinghai, vice chairman of the China Securities Regulatory Commission, expressed his latest views on hot topics of market concern such as the decline in Chinese stocks. 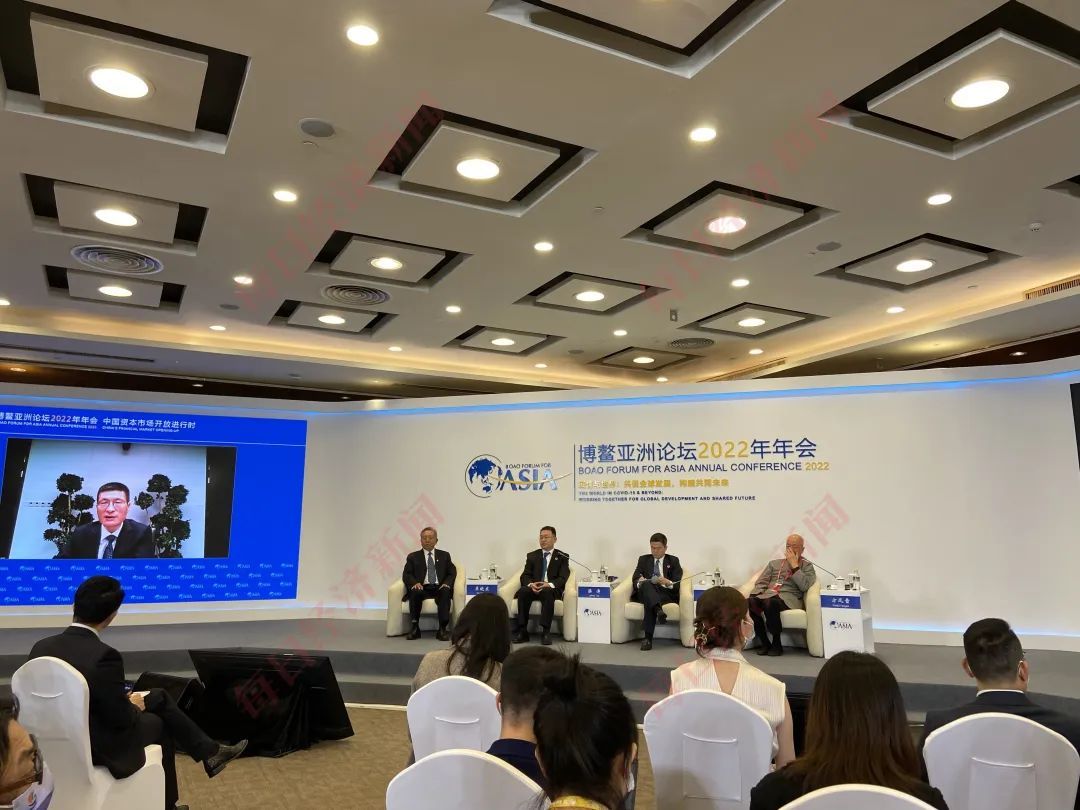 “Recent negotiations between China and the United States have progressed very smoothlyBasically, I negotiated the video every other week and put the details on the ground. Fang Xinghai said, himselfConfident of reaching a cooperation agreement in the near futureIt is more evidence-based for accounting firms that can conduct listing audits of Chinese stocks, which is good news for China stocks.

He said that the CSRC's attitude is to support enterprises to list overseas and support enterprises to choose which market to list on their own, "We believe that China, as a developing country, has not developed its own capital market sufficiently.Enterprises should use the two markets at home and abroad to develop themselves, and this direction will not change。”

According to Interface News, CITIC Securities believes that the introduction of the Foreign Company Accountability Act in the United States has caused market concerns, but the short-term centralized return of China and The United States is not realistic, facing four pressures such as liquidity discount, centralized selling, market preference, and policy risks. It is expected that cross-border audit supervision or Chinese expediency measures will be carried out for enterprises without major information security risks, and enterprises with major information security risks may accelerate their return. Under this scenario, it is estimated that the average annual new fundraising demand of China's return accounts for 16% of the total hong Kong stock IPOs, and the liquidity impact is controllable.However, the return of China is still a long-term trend, and the reform of supporting systems such as Hong Kong Stock Connect and A-share listing thresholds or follow-up policy forces。

Related news
@666 Join illuminati Kingdom in United Kingdom +27839387284
Strong Money Spells in United States (USA) | spiritual rats
here.@ ***
The risk of delisting of Chinese stocks has hit Hong Kong stocks hard, explain what the SEC will do next?
The US SEC has pulled the list again, and 17 companies such as Zhihu and Luckin are listed! Fang Xinghai: The negotiations between China and the United States are progressing very smoothly
Hot news this week
Tencent Music rose more than 3%, and its average monthly revenue of more than 10,000 musicians in 2021 doubled, and NFT will generate revenue for musicians
China Telecom and Huawei jointly released "Super Time Frequency Fold" 5G Determine Network wireless key technology
CNKI is a wholly foreign-owned enterprise? A-share listed company Tongfang shares responded in this way...
Apple has increased incentives in China to up to 15,000 yuan after cutting the trade-in price in the US
Washing your nose with salt Water may Prevent COVID-19, experts warn
"Tmall responds to over 300 minus 50" to the hot search, netizens: Don't engage in Olympiad, less routine more sincerity
Gree Electric has nothing to do with Gree Real Estate! Dong Mingzhu reiterated that he did not do finance and real estate
Xiang responded to Tesla's lawsuit by saying he was dissatisfied with tesla's arrogant attitude but not defamatory
Microsoft has launched an adaptive mouse for people with disabilities that can be assembled as many parts as they want
After the release of the 2999 yuan new machine, it instantly became the hottest model in the headlines: dominating the list all night
The most popular news this week
The domestic screens are rolled to the 2K screen. Why don't Apple follow the roll?
Experts remind: Do not put disinfection pieces to the sewer, it is useless and harmful to disinfection outdoor outdoor disinfection
Flying Pig's new "Yunyou Museum" can watch the live broadcast of nearly 20 museums in China
DEEPMIND training more than 600 tasks such as chatting, playing games, and accumulating wood
4K display uses 240Hz for the first time! Samsung's new flagship display is coming
Accidentally found a new track! AMD Rayon 7 6800U batch arrived
Better iPhone signal! Apple has released a new official version of iOS
iPhone security big overturn, built-in chip low-power operation, after shutdown can still be tracked location
Hong Kong stocks popular technology stocks rose sharply: JD.com rose more than 9% Ali rose more than 8%
Yu Minhong: Strive to open source while reducing costs quickly, or New Oriental will die