AMD announced its Q1-2022 earnings this morning, with record revenues and a roadmap for the consumer Zen4. Instead of just the desktop and mobile versions, there will actually be three consumer product lines, with a new performance-focused version for the mobile Version of the Ryzen 7000.

There are two mobile versions, one is Phoenix Phoenix series, which is the successor of Rayon 6000H/U series, power consumption 35~45W, support LPDDR5 and PCIe 5.0, for the thickness of less than 20mm thin.

The difference is that this time there is also a mobile version code-named Dragon Range (Dragon Ridge), for more than 20mm thickness of the game. 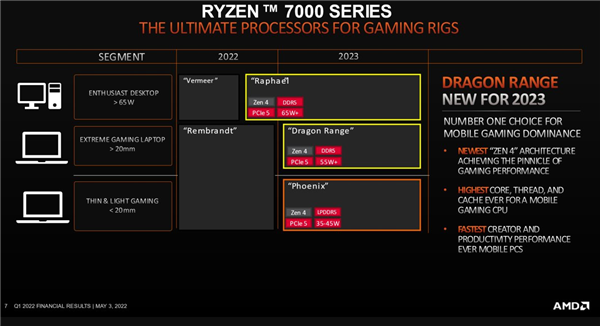 For this reason, the Dragon Range's specifications have been greatly improved, with TDP power consumption up to 55W+, SUPPORT for DDR5 memory and PCIe 5.0, as well as 5nm Zen4 architecture.

Why did AMD suddenly launch the Dragon Range processor? There is not much official talk about this, but from Intel's core 12 generation, the latter in performance and core number are new highs, especially the Alder Lake-HX series, the desktop version of the 16-core to the notebook platform, 16-core 24-thread, 55W+ power consumption.

Obviously, With the Dragon Range, AMD is going head-to-head with Intel in high-performance gaming cpus, an area previously dominated by Intel, and now AMD has an opportunity to go head-to-head with the 5nm Zen4 node.

While specifications for the Dragon Range processor have not been disclosed beyond TDP power, AMD insists it will have three strongest games. — Most CPU cores, most CPU threads, and most caches.

Considering the core 12 mobile version can achieve 16 core 24 threads, the next generation of Core 13 will be upgraded to 24 core 32 threads, AMD said that the maximum CPU core can not be lower than 16 cores,Of course, there are 24 cores and 48 threads to look forward to, otherwise it is easy to lose the advantage against the 13 generation Core, after all, Intel's energy efficient core core is too easy.

In addition to CPU core and thread leadership, AMD also highlighted the Dragon Range as having the largest Cache capacity, a hint that could rule out 3D V-cache technology, which could easily add 64MB to 128MB, but is unlikely to work on laptops.

In summary, The Dragon Range is a high-performance CPU based on the desktop Zen4. The number of cores can reach 16 or higher, and the design of cache is also higher than the original mobile Version of the Ryzen APU processor. The core display will be much weaker than the Phoenix series, but the CPU performance is more powerful. Suitable for high-end video card game.

AMD also confirmed that the Dragon Range will be named with the HX suffix, repositioning the current custom VERSION of the HX series, which is officially focused on high performance and distinct from the U/H series. 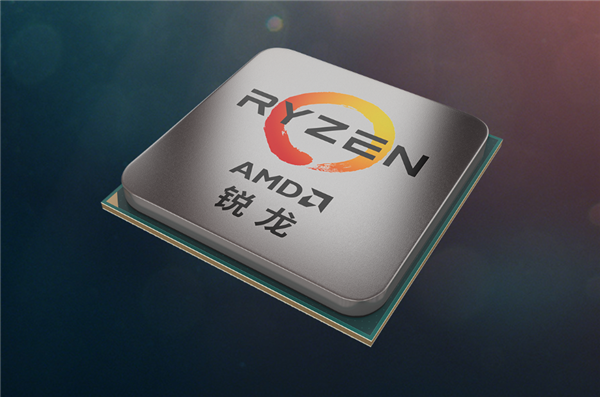 Related news
AMD sets the tone for the Zen3/Zen4 architecture: making important changes
10 nm ddr5 memory comes AMD zen4 is waiting for you: see you in 2022
5nm zen4 architecture! Amd sharp dragon 6000 processor big exposure: up to 16 cores, 170 watts
Easy 32 cores! The AMD Zen4 Ryzen™ 7000 has changed completely
Don't change U just yet! AMD Zen4 Dragon 7000, Intel 13 Generation Core quickly arrived
AMD Zen4 dragon "dragon and phoenix tire" came: 55W power consumption, game this finally full blood
AMD 3D Stack Cache is not out of print! Zen4 will also be on
AMD Zen4 accelerates up to 5.4GHz! All cores are 5.0GHz
AMD's next mobile processor ES edition has been unveiled: 8-core 16-thread Zen4 CPU+RDNA3 core
AMD Zen4 architecture APU set performance explosion! What about the RTX 3060
Hot news this week
China has found 35 known cases of the new zoonotic virus Langya
Monkey acne cases have ranked first in the world that the United States has announced the emergency state of public health
Credit card points rule intensive adjustment online transaction points more "valuable"
Losses in a single quarter of $ 23.4 billion a record, SoftBank did not carry the plunge of technology stocks and the devaluation of the yen
The prevention and control of the American Monkey epidemic has failed. What should I pay attention to?
Sources say Samsung's Galaxy Z Fold4 is going up in price: a 512GB top unit will cost more than 13,000
Is the micro -business headache? WeChat friends are suspected to have a big move: 7 can only be posted a week
Kuaishou launched a self-developed cloud intelligent video processing chip: The chip has been streamed successfully
The new product of Xiaomi MIX is coming: both internal and external dual -screen has been upgraded to make up for the previous generation.
A new zoonotic virus, Langya, found in China has not yet been confirmed to be transmitted from person to person
The most popular news this week
Mr. Lei: Mr. Bezos apologized to me for not taking good care of Joyo.com
Ever wanted to buy Tencent QQ, Alibaba asked for a stake? Lei jun rumours
Lei Jun's first business thinking book "Xiaomi Entrepreneurship Thinking" was introduced to the latest and most complete Xiaomi methodology summary
Apple's iPhone is no longer a symbol of wealth in China: for reasons to be proud
Xiaomi Motor Autonomous Driving First Show: Automatic Charging of Autonomous Driving in the whole scene
Musk's eyes! Lei Jun released a full -size humanoid robot Xiaomi self -developed strength explosion table
The global streaming media have increased the animation circuit is becoming a new "breakthrough" for Youaiteng
Kuaishou TOB business Yu Bing: Self -developed chips or mass production after the end of the year, the video must be turned into light industry
Lei Jun: Once bid 10 million to buy NetEase was rejected by Ding Lei
Intel burns 23.2 billion won't make a decent graphics card