According to the list released by the official website of the SEC, those included in the "pre-delisting list" include Didi, Lu Jinsuo, Kingsoft Cloud, Cook Music, Qutoutiao, 51Talk, Antelope Enterprise, Oxygen Technology, Love Click, Dingdong Grocery Shopping and Lanting Gathering. 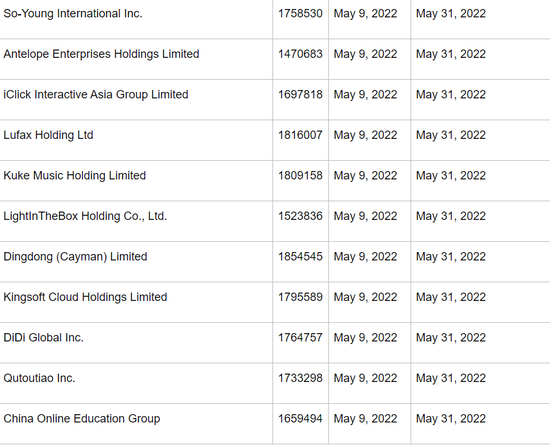 According to the Economic Daily, the SEC said that the above-mentioned Chinese stocks must submit evidence before May 31 to prove that they do not have a reason to be delisted, otherwise they will be included in the "confirmed delisting list".

Taiwan's "China Times Electronic News" said that this is the 7th batch of "pre-delisted" Chinese stocks announced by the SEC since the beginning of March, so far the US side has included 139 Chinese stocks in the list. A total of 23 companies in the previous four batches have passed the defense period and have been included in the "confirmed delisting list".

The SEC has previously placed a number of Chinese companies on a list that could be expelled from U.S. stock exchanges. Chinese Foreign Ministry spokesman Zhao Lijian pointed out on May 5 that we have noted the relevant situation. China's securities regulators have communicated with U.S. regulators on this issue. It is understood that the inclusion of Chinese enterprises in the relevant lists is a relevant step for the US regulatory authorities to implement their domestic laws. This does not mean that the relevant enterprises are necessarily delisted. Whether these companies are delisted or continue to be listed in the United States depends on the progress and results of Sino-US audit and regulatory cooperation.

Zhao Lijian said that China has always insisted on solving the audit supervision problems of Chinese-listed companies listed in the United States through equal cooperation. This is in the interest of capital markets and global investors in both countries. Recently, the regulatory authorities of both China and the United States have told the media that the two sides are maintaining close communication on audit and regulatory cooperation and focusing on promoting this cooperation. We are pleased to see the U.S. and Chinese regulators reach a cooperative arrangement that satisfies the regulatory requirements and legal requirements of both sides.

Related news
The English name of Chinese liquor has been changed: Chinese Baijiu has been officially launched
The risk of delisting of Chinese stocks has hit Hong Kong stocks hard, explain what the SEC will do next?
Weibo was included in the "pre-delisting list" by the SEC, the first Chinese Internet company
Sohu's response was placed on the SEC's "pre-delisting list": it is not intended to raise objections
The US SEC has pulled the list again, and 17 companies such as Zhihu and Luckin are listed! Fang Xinghai: The negotiations between China and the United States are progressing very smoothly
Hot news this week
The developer of the dating app Tinder has reached an agreement with Google over billing rules for its app store
Red Elf Lightning erupts in the Himalayas Spectacular Spectacle: Experts Reveal What Exactly Is This?
The founder of the Internet Quick Hand Su Hua was taken away for investigation, and the fast hand responded: the news was not true
Or for Studio Display Pro, the release of Apple's 27-inch Mini LED-backlit Display has been delayed by October
One picture to understand! Blue Factory has issued 3 new machines in a row: self-developed chip blessing, the narrowest lower border
Huawei and the Chinese Academy of Sciences jointly developed the new 3D DRAM solution is expected to break through the key root technology of storage
Tencent established a smart technology company in Chengdu, and its business scope includes Internet data services
I once touched the ceiling of the mobile phone screen! Well-known brands announced that the new flagship is the first to carry the Snapdragon 8+
Or has it been spread insidiously in Communities in Europe and the United States: Should We Be Worried About Monkeypox? Experts demystify
Economist credit card monthly bill $11.4! Only paying for a purchase of Tencent Music, the account manager is busy "condolences"
The most popular news this week
Pinduoduo Q1 revenue of 23.8 billion increased by 7% Technology and agricultural strategy into a dual engine
Musk: Tesla peripheral products can be purchased with Dogecoin
Luo Dayou Sun Yanzi brushed the scenes behind the screen and Tencent began to grab traffic again
Pinduoduo revenue in the first quarter of 23.8 billion increased by 7% year -on -year
Chinese stocks closed mostly up on Friday, Pinduoduo rose more than 15% Kingsoft Cloud rose more than 7%
Expert: Concerns that emojis cause expression to feel less susceptible may be exaggerated
The Changwu B rocket arrives at the Wenchang launch site and will launch the Wentian Experimental Module of the Chinese space station in July
The DuckDuckGo browser was found to have quietly allowed Microsoft to track it
Pinduoduo released the first quarter report, with a revenue of 23.8 billion yuan, starting the technology flow
Can air disinfection stick kill 99.9%coronary virus? Experts: Several levels of concentration are different