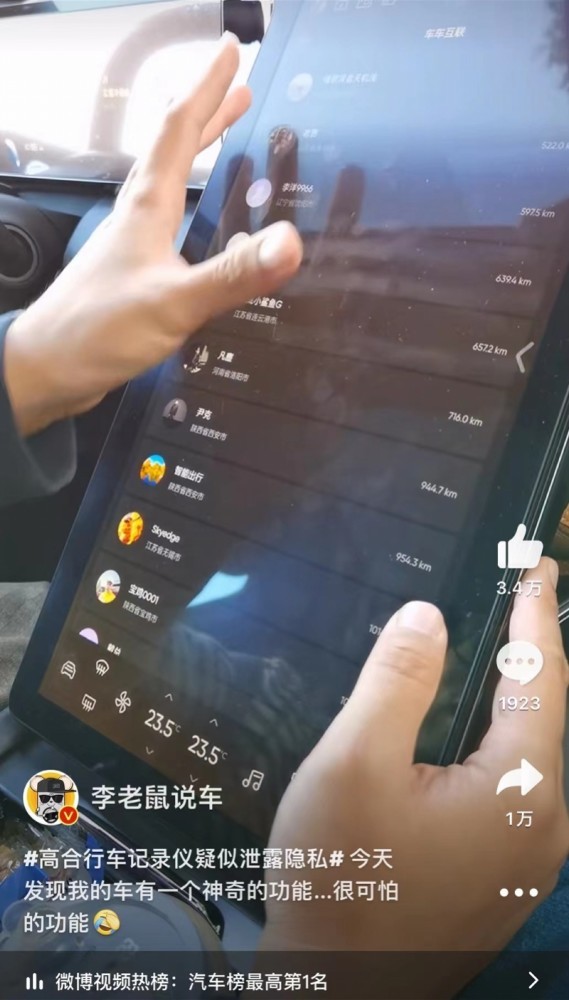 According to Nandu previous reports, on the evening of May 6, the car blogger@said the car posted a video saying that driving a high -co -car car found that through the "car interconnection" button through the interior of the car, you can see thousands of thousands of. The real -time driving recorder screen of the unfamiliar high -car car owner inside and outside, the news of the high -end car driving recorder suspected to leak privacy entered the Weibo hot search.

In the early morning of May 7, High -Hent -car responded that the function was part of the team's travel and vehicle road collaborative system. It was closed by default when leaving the factory. Users need to confirm the privacy pop -up window after the vehicle is charged. storage.

At 10 o'clock on May 7, the parties@5 5 said the car sent a video again to reveal that after exposing this strange feature on social platforms, the video browsing volume exploded and was scolded by many people. He explained that he found this strange feature with a car one year later. There is a large V to his popular science. This is the coordinated system of the car, but he expressed unconcerned. After a lapse, when he entered the "Car Interconnection", no other user list appeared.

Regarding the relevant situation, on May 9, a reporter from Nandu visited a high -co -car store in Guangzhou and found that the Hiphi X cockpit uses the screen touch screen instead of mechanical buttons, which focuses on smart driving. Through the driving recorder through the touch screen, one of which is "vehicle interconnection", and there is no relevant content after entering. Sales stated that "car interconnection" is a relatively popular function on the Internet before. It is used to visit the driving recorder of the other car in real time when the team travels with it. "See where the other person is in, tell it how to go."

Nandu reporters noticed that in order to realize the intelligent of the entire car, the reporter's dialogue voice with sales was recognized in real time as a text control display on the vehicle. There is a camera in the front and rear rows in the car. The front camera is a surround viewing angle. You can see the movement of the person in the car, and the picture quality is clear. A reporter from Nandu asked@南 南 南 said the car encountered, and the staff briefly explained that the camera will only be activated after locking the car. It is a real -time lens. Regarding whether the video users can be taken by the camera in the car can be retrieved by themselves, the staff said that it was not possible to master the data in the background, but it would not be made public.

Regarding the function of the high -co -car driving recorder "Car Interconnection", the nickname, location, and distance information of the foreign riders, some netizens are puzzled, "Is High -Heal Motor who wants to do socializing?" For this question, on May 13th, on May 13th In the evening, the relevant person in charge of High -Heart Motors told Nandu reporters that social functions have not been fully developed, and it is not suitable for commenting on this.

Related news
Apple will invest a lot of R & D money in Apple Car projects
Xiaomi ecological blessing! Xinbao Jun E300 small Biu pre-sale 65800, similar to K-Car :1
New Baojun E300 small BIU supported by Xiaomi ecology will go on the market: similar to K-car
Maybe we'll see the apple car in nine months
Chinese version of "K-car" will be on the market! Sword finger Wuling Hongguang Mini ev
Apple Car acceleration? Apple will work with a number of Korean manufacturers
Gaohe "Car Interconnection" suspected of leaking privacy claims that it has been closed! Response social function development status
Hot news this week
The developer of the dating app Tinder has reached an agreement with Google over billing rules for its app store
Red Elf Lightning erupts in the Himalayas Spectacular Spectacle: Experts Reveal What Exactly Is This?
The founder of the Internet Quick Hand Su Hua was taken away for investigation, and the fast hand responded: the news was not true
Or for Studio Display Pro, the release of Apple's 27-inch Mini LED-backlit Display has been delayed by October
One picture to understand! Blue Factory has issued 3 new machines in a row: self-developed chip blessing, the narrowest lower border
Huawei and the Chinese Academy of Sciences jointly developed the new 3D DRAM solution is expected to break through the key root technology of storage
Tencent established a smart technology company in Chengdu, and its business scope includes Internet data services
I once touched the ceiling of the mobile phone screen! Well-known brands announced that the new flagship is the first to carry the Snapdragon 8+
Or has it been spread insidiously in Communities in Europe and the United States: Should We Be Worried About Monkeypox? Experts demystify
Economist credit card monthly bill $11.4! Only paying for a purchase of Tencent Music, the account manager is busy "condolences"
The most popular news this week
Pinduoduo revenue in the first quarter of 23.8 billion increased by 7% year -on -year
Chinese stocks closed mostly up on Friday, Pinduoduo rose more than 15% Kingsoft Cloud rose more than 7%
Expert: Concerns that emojis cause expression to feel less susceptible may be exaggerated
The Changwu B rocket arrives at the Wenchang launch site and will launch the Wentian Experimental Module of the Chinese space station in July
The DuckDuckGo browser was found to have quietly allowed Microsoft to track it
Pinduoduo released the first quarter report, with a revenue of 23.8 billion yuan, starting the technology flow
Can air disinfection stick kill 99.9%coronary virus? Experts: Several levels of concentration are different
Pinduoduo Q1 revenue of 23.8 billion increased 7%and a monthly survival of 750 million. Vice president said that the growth of growth is inevitable.
Liu Chiping resigned from Tencent Music Director, Zheng Runming took over, and the latter had financial management related background
Pinduoduo: As of 12 months of March 31, 2022, the number of active buyers was 881.9 billion, an increase of 7% year -on -year