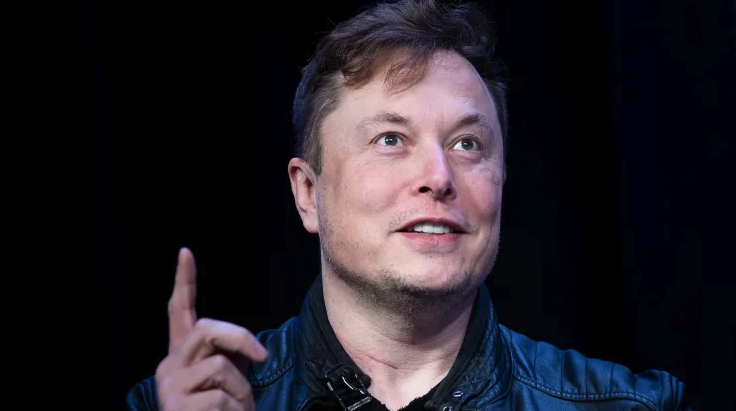 Ifeng.com technology news May 15 Beijing time news, Tesla CEO Elon & Middot; Elon Musk said he would study a random sample of 100 twitter followers to find out if fake/spam accounts on Twitter were less than 5 percent, as the company has long claimed. However, experts in social media, disinformation and statistical analysis say Musk's analysis has serious flaws.

"To find out, my team will randomly select 100 @Twitter followers. I would invite others to repeat the same process and see what they find, "Musk tweeted, spelling out his approach, adding," Pick any account with a large number of followers, ignore the first 1,000 followers and then pick one out of every 10. I'm open to better ideas." 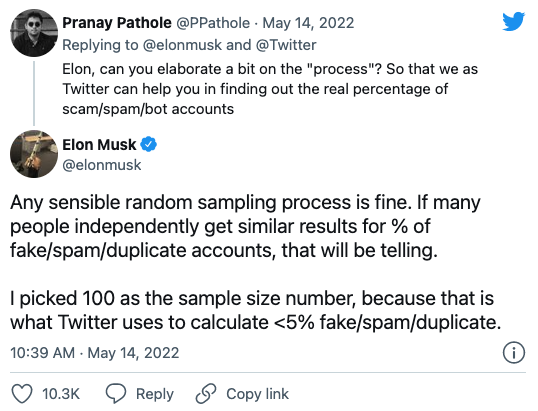 Musk is taking a sample of 100 followers

Dustin & Middot, co-founders of Facebook; Dustin Moskovitz commented on the issue via his Twitter account. He points out that Musk's method is not actually random, using too small a sample and leaving huge room for error. "I think 'don't trust the Twitter team to help take samples' is a red flag in itself." He said.

Carl & Middot, University of Washington; T· Carl T. Bergstrom, one of the authors of a book that helps people make sense of data and avoid being duped by bogus claims on the Internet. A sample of 100 twitter followers on any one account should not be "due diligence" for a $44bn acquisition, he said.

A sample size of 100 people is orders of magnitude smaller than what social media researchers use to study such things, he said. The biggest problem Mr Musk will face with this approach will be selection bias. "There is no reason to believe that followers of the official Twitter account are a representative sample of accounts on the platform. Maybe bots are less likely to follow the account to avoid detection, or maybe they're more likely to follow it to look like a normal account. Who knows? But I just don't understand what Musk has done other than trick us with this stupid sampling plan." (Author/Xiao Yu)

Related news
GitHub Trending has long been “hidden” by Chinese developers. Foreign developers SAY NO
Musk challenges Twitter and announces that he will "go offline"
Twitter starts downloading personal twitter data again
Musk will meet with Twitter employees next week in hopes of dispelling concerns
Investors are worried that Musk is abandoning the privatization deal: Twitter shares hit a new recent low
Hot news this week
Tencent Music rose more than 3%, and its average monthly revenue of more than 10,000 musicians in 2021 doubled, and NFT will generate revenue for musicians
China Telecom and Huawei jointly released "Super Time Frequency Fold" 5G Determine Network wireless key technology
CNKI is a wholly foreign-owned enterprise? A-share listed company Tongfang shares responded in this way...
Apple has increased incentives in China to up to 15,000 yuan after cutting the trade-in price in the US
Washing your nose with salt Water may Prevent COVID-19, experts warn
"Tmall responds to over 300 minus 50" to the hot search, netizens: Don't engage in Olympiad, less routine more sincerity
Gree Electric has nothing to do with Gree Real Estate! Dong Mingzhu reiterated that he did not do finance and real estate
Xiang responded to Tesla's lawsuit by saying he was dissatisfied with tesla's arrogant attitude but not defamatory
Microsoft has launched an adaptive mouse for people with disabilities that can be assembled as many parts as they want
After the release of the 2999 yuan new machine, it instantly became the hottest model in the headlines: dominating the list all night
The most popular news this week
The domestic screens are rolled to the 2K screen. Why don't Apple follow the roll?
Industry sources say that brand laptop manufacturers have cut off 2022 orders
Apple tvOS 15.5 supports Apple TV HD and 4K
Notebook can't sell? Several computer brands cut product orders: Apple Mac lies to win
Experts remind: Do not put disinfection pieces to the sewer, it is useless and harmful to disinfection outdoor outdoor disinfection
Flying Pig's new "Yunyou Museum" can watch the live broadcast of nearly 20 museums in China
DEEPMIND training more than 600 tasks such as chatting, playing games, and accumulating wood
4K display uses 240Hz for the first time! Samsung's new flagship display is coming
Accidentally found a new track! AMD Rayon 7 6800U batch arrived
Better iPhone signal! Apple has released a new official version of iOS