Experts say that the north is still cold in May is indeed abnormal To reveal the reason behind it: the temperature will rise to 30 ° C

May is more than halfway through, after the summer in many areas in the north still feel "cool", some netizens joked: "wear short sleeves in the spring, wear autumn pants after the summer, the four seasons are more and more willful."

Zhang Tao, chief forecaster of the Central Meteorological Observatory, said that the performance of atmospheric circulation in the entire Asian region for a period of time around the beginning of summer this year is indeed abnormal, and for our country, it is characterized by abnormally active and strong cold air.

"Under the impact of multiple rounds of cold air, it is relatively rare in this season that the boundary of large-scale continental dry air mass invading the south can reach the north-central part of the South China Sea and extend west to the west to western Yunnan." Zhang Tao said that in the context of summer, the temperature in the north and parts of the south is cold, especially compared with the warm and even hot situation in the same period of the year, this year's coolness is indeed more abnormal.

In early May, the temperature in the north and south was upside down, and the warm heat rarely seen in early May appeared in some areas. At 14:00 on May 2, Beijing warmed up past Guangzhou, and Kunming was colder than Changchun. At about 14:49 on May 5, the temperature in Yinchuan, Ningxia, even soared to 35.6 °C, becoming the first provincial capital city in the north to break through the high temperature line this year, nearly a month and a half earlier than the usual average.

In early May, 167 national weather stations broke records for the lowest ever-high daily temperatures in the same period of history, and these places experienced the coldest recorded early May. In Beijing, for example, the average maximum temperature in Early May was 24.9 °C, but the highest temperature in Beijing on May 8 was only 13.7 °C.

The good news is that the North will go into warming mode next week.According to the forecast of the National Meteorological Administration, early next week, with the end of the influence of cold air, most of the north will launch a wave of temperature rebound, the long-lost warmth will gradually return, and the maximum temperature in the central and eastern parts of the northwest region, north China and Huanghuai will rise to about 30 ° C. 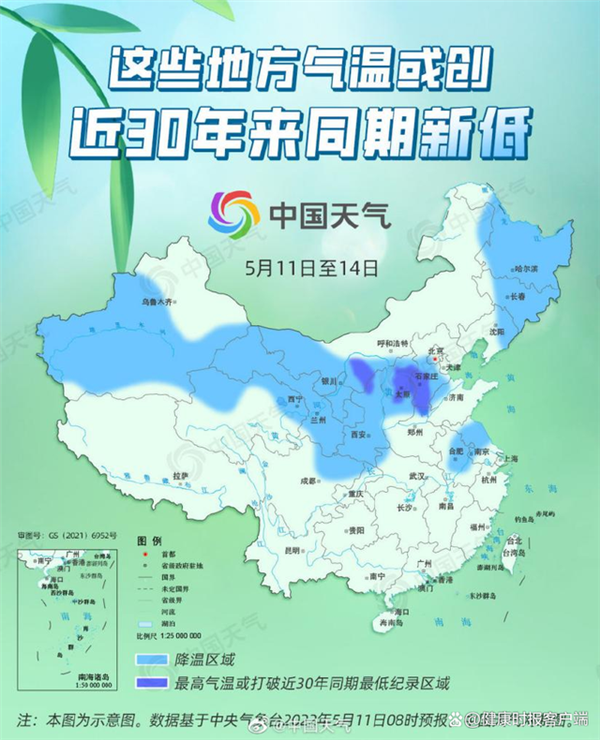 Related news
Microsoft Windows 10 May 2019 update officially started to push globally within a few weeks
Three ways to upgrade Windows 10 May 2019
[Tips] How to download Windows 10 May 2019 updates directly from a browser
RTM Windows 10May 2020 Experience Report: Finding Three Important Things
Windows 10May 2020 information summary: release time, new features, etc .(figure)
Windows 10 may 2020 ready to launch: inventory of major new features (Figure)
Windows 10 may 2020 causes some old NVIDIA drivers to be installed on the blue screen
Windows 10 may 2020 removal features list: windows to go, Cortana consumption level skills, etc
Tip: how to uninstall Cortana voice assistant for windows 10 may 2020
Windows 10 may 2020 update no longer pre installed the connect app by default (Figure)
Hot news this week
Tencent Music rose more than 3%, and its average monthly revenue of more than 10,000 musicians in 2021 doubled, and NFT will generate revenue for musicians
China Telecom and Huawei jointly released "Super Time Frequency Fold" 5G Determine Network wireless key technology
CNKI is a wholly foreign-owned enterprise? A-share listed company Tongfang shares responded in this way...
Apple has increased incentives in China to up to 15,000 yuan after cutting the trade-in price in the US
Washing your nose with salt Water may Prevent COVID-19, experts warn
"Tmall responds to over 300 minus 50" to the hot search, netizens: Don't engage in Olympiad, less routine more sincerity
Gree Electric has nothing to do with Gree Real Estate! Dong Mingzhu reiterated that he did not do finance and real estate
Xiang responded to Tesla's lawsuit by saying he was dissatisfied with tesla's arrogant attitude but not defamatory
Microsoft has launched an adaptive mouse for people with disabilities that can be assembled as many parts as they want
After the release of the 2999 yuan new machine, it instantly became the hottest model in the headlines: dominating the list all night
The most popular news this week
The domestic screens are rolled to the 2K screen. Why don't Apple follow the roll?
Experts remind: Do not put disinfection pieces to the sewer, it is useless and harmful to disinfection outdoor outdoor disinfection
Flying Pig's new "Yunyou Museum" can watch the live broadcast of nearly 20 museums in China
DEEPMIND training more than 600 tasks such as chatting, playing games, and accumulating wood
4K display uses 240Hz for the first time! Samsung's new flagship display is coming
Accidentally found a new track! AMD Rayon 7 6800U batch arrived
Better iPhone signal! Apple has released a new official version of iOS
iPhone security big overturn, built-in chip low-power operation, after shutdown can still be tracked location
Hong Kong stocks popular technology stocks rose sharply: JD.com rose more than 9% Ali rose more than 8%
Yu Minhong: Strive to open source while reducing costs quickly, or New Oriental will die