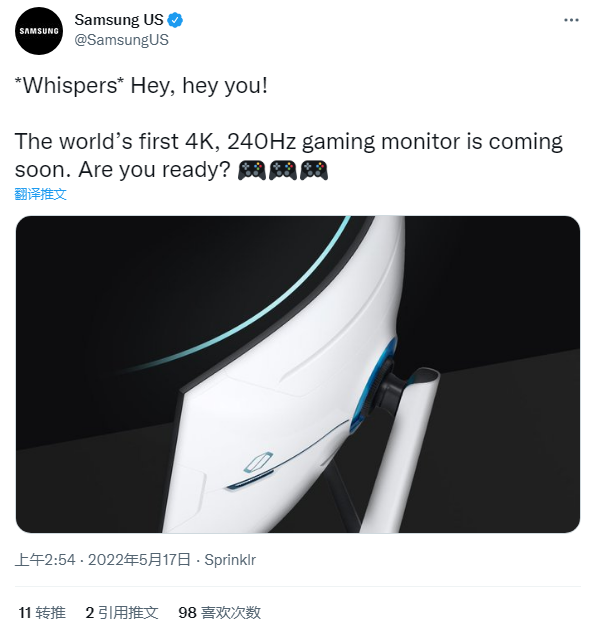 If there are no accidents,This monitor should be the Odyssey Neo G8 previously announced by Samsung at SCE 2022.

In other respects, the Odyssey Neo G8 is capable of 4096 levels of brightness control for more detailed black detail rendering, and offers two HDMI 2.1 interfaces and a DP 1.4 interface.

In appearance, this monitor has a screen curvature of 1000R, and a large number of curved elements are used in positions such as brackets, with a white back shell and blue as an embellishment, presenting a sense of futuristic technology.

At this stage, Samsung officials have not yet announced the release time and price of this monitor.However, judging from the fact that it has entered the publicity process, it should be able to officially come out soon. 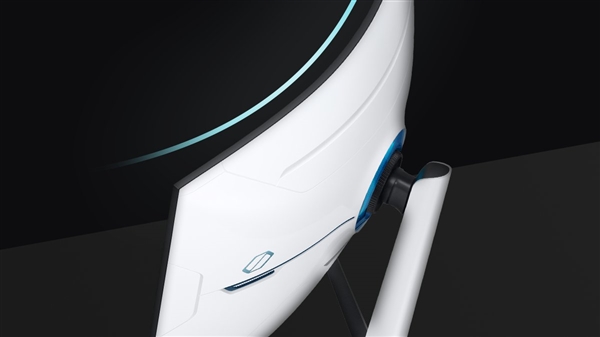 Related news
Samsung Galaxy S20 due to hardware restrictions 2K resolution 1 2 0 Hz not open simultaneously
Samsung display will start mass production of qd-oled panel in 2021
2K 120Hz screen plus Samsung Galaxy S21 super large cup 144hz
The world's first 4K 240Hz miniLED display unveiled: amazing brightness and contrast
Apple has unveiled its new Studio Display with a 5K resolution and A13 chip
4K display uses 240Hz for the first time! Samsung's new flagship display is coming
Hot news this week
Young people can't change their mobile phones one brother pressure in the channel inventory up to 50 million
Chinese mysterious female rich 560 million buy European luxury homes: the full amount of cash is paid at a time
Criminal gang candid courier list takes the money 8 people to be arrested
Do you make feed after Yi Lord? Zhenghong Technology M & A has mystery
Internal personnel have caused players to contradict? Netease "Yin Yang Shi": Impossible!
The first pop -up shop in the United States opened, Bubble Mart opened the North American expansion plan
The goose factory is finally making a move on the metasverse?
Big news! The police report henan village banks can not withdraw cash case, has captured a number of suspects
With this charging treasure that can legal "stealing electricity", I don’t worry about the mobile phone out of power
Tesla has lost nearly $600 million after the richest Chinese lost 89% of his net worth in the bitcoin crash
The most popular news this week
The iOS 16 upgrade is no longer supported on the iPhone 6s
Apple M2 version of MacBook AIR July Sale: Magsafe Return
Activision Blizzard CEO Bobby Kotick kept his seat on the board
Apple's best-selling product is getting an update! New AirPods Pro Exposure: Heart rate monitoring, USB-C support
Huawei's new generation of "small table" Watch Fit 2 on the shelves: Support Bluetooth call
Provide abortion travel benefits! Giant companies "resist" US Supreme Court
The Google Pixel 7 Pro will have a Samsung display: brighter than the Pixel 6 Pro
Nokia Style+5G new machine Pass FCC certification: 5000mAh battery+20W fast charge
Behind the collapse of the Mijia app, the lack of PLANB of smart homes
It is said that the Fuji XT5 camera will use 40 million pixel CMOS