Templates for creating new Twitter in the future? Musk's praise of WeChat has triggered a heated discussion on the whole network

Earlier this week, Musk gave his latest views on many hot topics such as the US economy and the Twitter acquisition when he was a guest on the "All-In" summit technology conference interview program in Miami.

Among them, Musk's praise for China's social media platform WeChat immediately triggered a heated discussion among domestic netizens: When "American Horse" likes "Little Horse Brother", will it also indicate that WeChat will become a template for its future transformation of Twitter?

Musk said on a talk show at the time, "If you're in China, then your life can basically depend on WeChat." WeChat is powerful, basically anything can be done, it's a bit like Twitter plus PayPal, plus a whole bunch of other features combined into one. The interface is also great and really a really good app. ”

Musk added that he wasn't sure whether Twitter should be such a super app or whether it should create an entirely new product from scratch. But one thing he's pretty sure of is: "There has to be such an application." ”

"This application can be built into a digital town square where people can discuss opinions and gain maximum trust, and once trust is gained, whether it's the introduction of cryptocurrencies or fiat currency payment methods, it makes sense," Musk said.

On Wednesday, Musk's praise for WeChat has also quickly "become popular" on domestic social media: at present, related terms have been at the forefront of Sina's hot search.

Some netizens joked: "Isn't this signal a sign that Musk is ready to fully acquire WeChat, I don't know if Tencent will let go?" ”

Some bloggers also told Musk that "Twitter is more like a social platform similar to Weibo than a communication-focused, closed software like WeChat." However, WeChat's instant payment can indeed be used as a reference, and I don't know what kind of interaction with cryptocurrencies can be generated. ”

Tesla, based in Austin, Texas, has a large presence in China. In the first quarter of this year, Tesla's sales in China increased by 56%. Throughout last year, Tesla's Shanghai Lingang plant delivered a total of 484,100 electric vehicles and became Tesla's most important export center in the world.

And thanks to his understanding of the Chinese market, Musk is obviously no stranger to many Chinese Internet companies.

Musk praises behind WeChat: the more you look at Twitter, the less "satisfied" you are

It is worth mentioning that while Musk praised WeChat this week, he seems to be less and less "satisfied" with the Twitter that will be in his pocket.

After Musk's "hold deal" last week stunned the market, Musk hinted on Monday that he might renegotiate the price of buying Twitter, and that it is not "impossible" to buy at a lower price.

Musk's latest remarks raise doubts about his commitment to completing the deal, which comes at a time when tech stocks are falling sharply. Musk said last week that the transaction was "put on hold" due to concerns about fake accounts on the platform. Social media companies have long been plagued by the problem of fake accounts.

Twitter CEO Parag Agrawal has spent the past few days trying to defend the company's ability to crack down on spam accounts. Agrawal said his company bans more than 500,000 spam accounts every day and millions of accounts suspected of being spam every week that can't be verified by real people.

"Unfortunately, we don't think it's possible to make such a specific estimate from the outside, because the key to making this estimate is that public and private information must be used, which we can't share." It's even impossible to know which accounts are counted as monetized daily active users on a given day," Agrawal said.

In response, Musk sent a number of tweets in response, one of which only had a picture of on it. 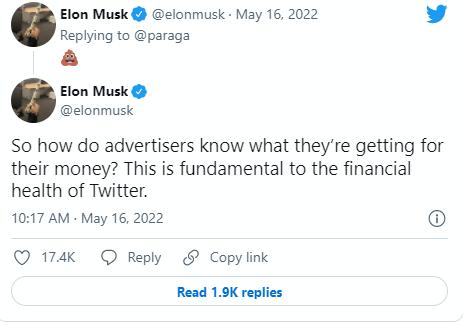 When WeChat, which is far away, has become the flower in Musk's eyes, and the upcoming Twitter has become the in his eyes, it may not be difficult to understand why more and more people in the industry are not optimistic about the deal. 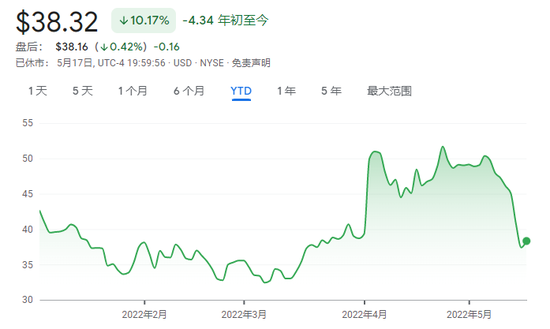 Related news
The number of monthly accounts of Tencent WeChat and WeChat has reached 1,132.7 million: a year-on-year increase of 7%
The overseas version of enterprise wechat has been renamed from wechat work to wecom
Tencent: existing wechat users in the U.S. may continue to use but cannot obtain new users, and will continue to negotiate
Change name to avoid ban? Tencent: wecom and wechat are different products
Has soared to 54,000 Wechat and downloads surged in the U.S. over the weekend
Tencent releases Q1 financial report: revenue 135.3 billion yuan, wechat / wechat monthly life 1.24 billion yuan
India canceled Amazon's acquisition of Future transaction license fined Rs 200 crore
Hot news this week
Young people can't change their mobile phones one brother pressure in the channel inventory up to 50 million
Chinese mysterious female rich 560 million buy European luxury homes: the full amount of cash is paid at a time
Criminal gang candid courier list takes the money 8 people to be arrested
Do you make feed after Yi Lord? Zhenghong Technology M & A has mystery
Internal personnel have caused players to contradict? Netease "Yin Yang Shi": Impossible!
The first pop -up shop in the United States opened, Bubble Mart opened the North American expansion plan
The goose factory is finally making a move on the metasverse?
Big news! The police report henan village banks can not withdraw cash case, has captured a number of suspects
With this charging treasure that can legal "stealing electricity", I don’t worry about the mobile phone out of power
Tesla has lost nearly $600 million after the richest Chinese lost 89% of his net worth in the bitcoin crash
The most popular news this week
Apple's best-selling product is getting an update! New AirPods Pro Exposure: Heart rate monitoring, USB-C support
Huawei's new generation of "small table" Watch Fit 2 on the shelves: Support Bluetooth call
Provide abortion travel benefits! Giant companies "resist" US Supreme Court
The Google Pixel 7 Pro will have a Samsung display: brighter than the Pixel 6 Pro
Nokia Style+5G new machine Pass FCC certification: 5000mAh battery+20W fast charge
Behind the collapse of the Mijia app, the lack of PLANB of smart homes
It is said that the Fuji XT5 camera will use 40 million pixel CMOS
The Internet Information Office launched the network security review of Zhiwang. Jack Ma appeared in Spain. The paid video of station B made the UP owner over 10,000. LeTV Video an...
Build a nuclear power plant on the moon? NASA selected three American companies to develop and develop
Gree Electric: Jinghai Interconnection today passes 1.86%of the shares through the large transaction company