May 19 news, Android phone camp was exposed again cut single. China's top three mobile phone manufacturers xiaomi, OPPO and Vivo have told their suppliers that they will cut orders by about 20 percent in the coming quarters, Nikkei Asia reported.

Xiaomi told its supply chain it would lower its full-year sales target of 200 million units to 160 million to 180 million units, nikkei said, citing unnamed sources. OPPO and Vivo are also reported to have cut orders by about 20 percent in the current and next quarters in order to absorb the excess inventory accumulated in the current channel.

Global smartphone shipments fell 11% year-on-year due to unfavorable economic conditions and seasonally weak demand in the first quarter of 2022, according to a new report by Canalys. Samsung topped the list with 24 percent market share, followed by Apple and Xiaomi, which remained in third place with 13 percent. OPPO and Vivo rounded out the top five with 10% and 8% share respectively.

It is worth noting that the market share of domestic manufacturers Xiaomi, OPPO and Vivo in the first quarter of 2022 decreased by 1% compared with the same period in 2021. Samsung and Apple, however, are on the rise. 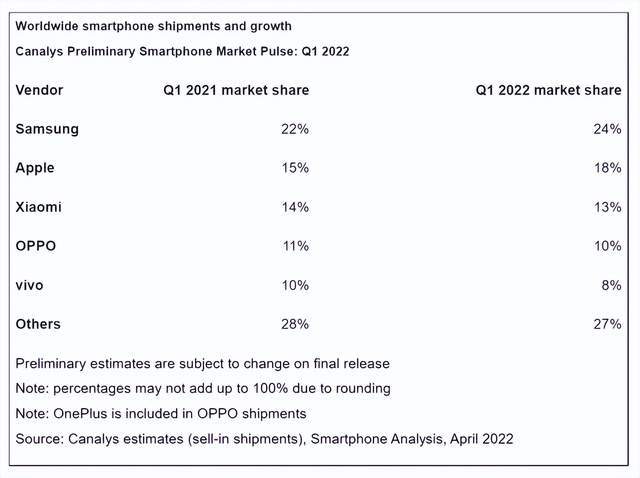