With the arrival of computex Taipei, AMD brought some details of the new generation of Ryzen 7000 series processors with Zen4 architecture. 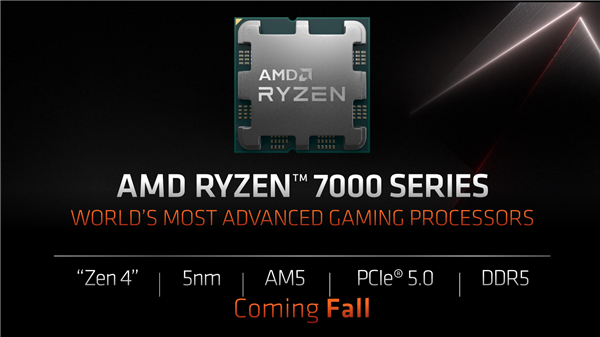 The official release and listing will be until some time in the autumn of this year, and this disclosure is only part of the technology and specifications, of course, there can be no model and price.

AMD has previously announced that the Ryzen™ 7000 series processors will be manufactured on a 5nm process, supporting DDR5 memory, PCIe 5.0 bus, and using a new AM5 package interface. 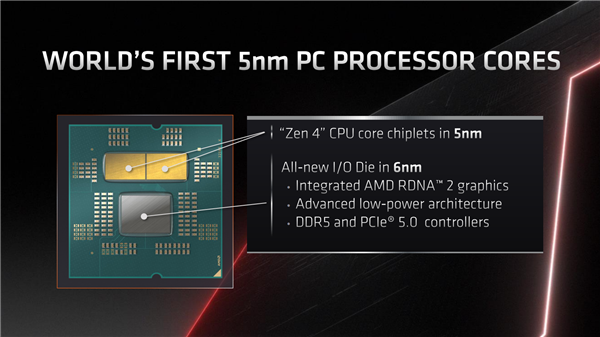 "The world's most advanced game processor" for the first time showed the internal structure,It is also a classic combination of CCD computing chiplet and IOD input and output chiplet, based on TSMC's 5nm and 6nm workers, respectivelyYi, also the first 5nm PC processor core.

The IOD part is the first to join the GPU graphics core, and it is the latest RDNA2 architecture, that is, the entire line is APUOf course, there should be some models that do not turn on the GPU, similar to the F series of competitors.

It can be seen that because of the addition of GPUs, it is also necessary to integrate DDR5 and PCIe 5.0 controllersThe area of the IOD is much larger, but it also has advanced low-power architecturesto control power consumption and heat generation.

At the same time, it can be confirmed that the Ryzen 7000 series does no longer support DDR4 memory, but I believe that after the release of the new platform, the price of DDR5 will basically drop. 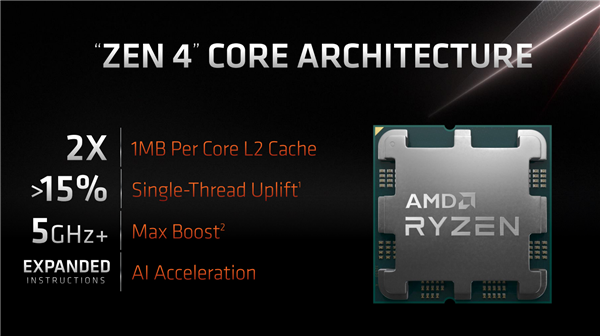 Zen4 architectureL2 cache capacity will be doubled to 512KB per core to 1MBThe L3 cache is expected to remain unchanged, or 8 cores share 32MB.

In terms of frequency, the maximum acceleration will exceed 5GHz, coupled with the higher IPC (instructions per cycle) brought by the new architecture, single-threaded performance will be improved by more than 15%! 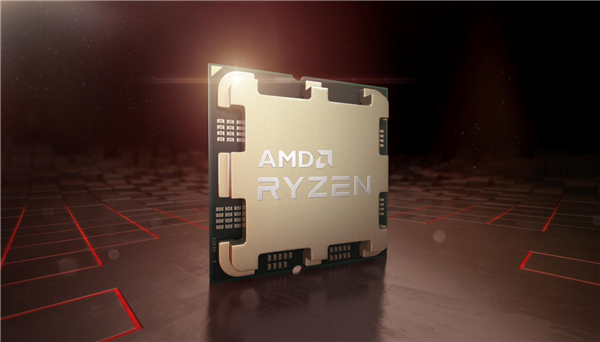 Related news
AMD sets the tone for the Zen3/Zen4 architecture: making important changes
Easy 32 cores! The AMD Zen4 Ryzen™ 7000 has changed completely
AMD 5nm zen4 processor no longer lack? Test 3
AMD Zen4 accelerates up to 5.4GHz! All cores are 5.0GHz
Finally super 5GHz! AMD Zen4 Ryzen™ Details Official Announcement: Single-Core Leap 15%
AMD Zen4's performance is fierce! Single core surpassing i9-12900K 22 %
AMD Zen4's performance flies! Intel 13th generation Core but no worry
Acceleration frequency 5.85GHz! AMD Zen4 This is going to fly
AMD Zen4 overclocked at 5.6ghz: Still not catching up with the 12G Core
AMD badly needs the 3nm Zen5: unfortunately, not until 2024
Hot news this week
During the quarter, we signed a multi-year intellectual property patent licensing agreement with a major licensee. This positive result enables us to obtain more 5G patent licensin...
Win10 digital version will be discontinued: free whitewash is still available Microsoft has not been under the dead hand for 7 years
Microsoft posted $17.4 billion in non-GAAP net income on revenue of $52.7 billion in the second quarter of fiscal 2023
YouTube complained about: using offline return-to-work policy to illegally block contract workers from unionizing
India receives Radio Signals from Galaxies 9 billion light-years Away Astronomers: Aliens not involved
Beautiful country semiconductor ushered in the winter, US high enterprises inverted, our country market doesn't buy it!
Cybertruck skipped tickets again! Mass production of Tesla electric pickup truck will not wait until 2024.
Apple will relax measures to deal with COVID-19 's epidemic and encourage employees to go back to work
Huawei P60 Pro latest configuration chart revealed: variable aperture and satellite communications are on the list
Intel: 14 generations of Core in the second half of the year, and build a new architecture from zero next year.
The most popular news this week
ChatGPT after global explosion: Baidu announces similar AI service to be launched in March
Lei Jun announced the first major event at the beginning of the year: it is critical to Xiaomi!
Carry the cauldron! Three out of ten divorces are linked to one partner's addiction to their mobile phone, research suggests
The iPhone is No. 1 in China! Why do people prefer Apple to Android?
China develops starch and protein synthesis technology for corn stover: Costs drop dramatically
Technology tree point crooked? Toyota's new patent: hold the door handle can be sterilized
Eight satellites in eight hours! China rushed to Venezuela's relief efforts
Apple bet on mixed reality, but the selling point of the product is not enough.
Baidu is reported to launch an AI chat robot service similar to ChatGPT in March this year.
The most powerful SSD becomes the last song Intel retired Aoteng hard disk: 6 years of performance is still leading