On this day, Sun Yanzi held a "Hello" online singing meeting in Douyin, and Luo Dayou lived a "childhood" concert on the lawn in the video number. For listeners who are familiar with the Chinese music scene, it is worth hesitation to make a choice between the two, and it is not impossible to play simultaneously with two screens.

This is a small choice, but it has more significant significance for the two platforms behind Douyin and video.

From the data point of view, Douyin live broadcast seems to show its advantage. At 23:07, the video number showed 40.38 million people who watched Luo Dayou's concert. At this time, it was already released. When Sun Yanzi Singing Chat's live broadcast was approaching, nearly 240 million people were viewed in the upper right corner of the screen. As a reference, Douyin's daily life has exceeded 600 million.

However, the statistical caliber of the two platforms for "people" and "people" is not consistent, which may also be a factor in data. What are the specific effects? It is also necessary to wait for the official statistics to be more clear before judging.

Another reality is that in the feedback of user feedback, the view of Luo Dayou's concert seems to be far better than Sun Yanzi's singing and chat. On the one hand, the viewing of the video number is clearer than Douyin live broadcast. At the same time, Luo Dayou's concert is still in place. In contrast, Sun Yanzi's stage lighting arrangement is being arranged by the stage lighting of Sun Yanzi. Some fans believe that it is "not attentive." 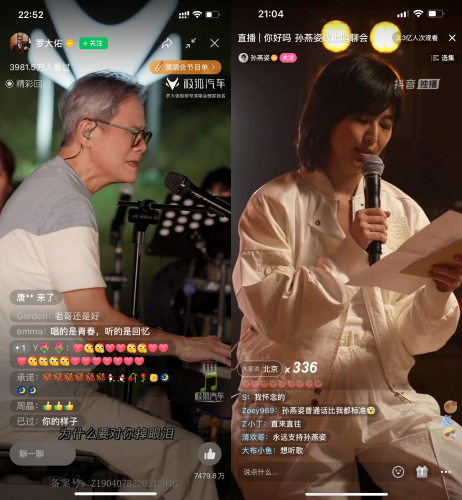 On the other hand, Sun Yanzi's singing chat suddenly interrupted when the end of the end, causing the audience to be quite dissatisfied. Sun Yanzi's studio immediately explained on Weibo that "the situation of the on -site transmission equipment caused the program to be interrupted." Finally, it was temporarily decided to re -sing the end of the track "windbreaker" by Sun Yanzi. In addition, the reading letters and other links were also accused during the singing meeting. Under the Weibo, some comments questioned the professionalism of performance planning.

In fact, Douyin took the lead in setting off the trend of live concerts in short video platforms. From August 3rd to September 9th last year, Douyin held 7 summer songs, including Zhang Huimei, Chen Li, Ouyang Nana, Sun Yanzi and other singers. Fans watch in the form of paid, with the fare ranging from 6-30 yuan, and only Sun Yanzi is free. On the data, the number of viewers exceeded 10 million times, and Sun Yanzi praised more than 600 million.

The video number concert started from the Nishicheng boy at the end of last year. At present, the video number has been broadcast live for 8 concerts. Among them, the highest viewing data was the replay of Jay Chou's 2013 "Ferris Wheel" concert. The number of viewers exceeded 50 million, which was equivalent to 5%of WeChat daily living users. Cui Jian and Xicheng boys also reached 46 million and 27 million respectively.

It seems that the video number has mastered the "traffic password": On Friday, which is about to welcome the vacation, the well -known singers and popular songs, the themes related to childhood, youth, and memories, after frequent reposting and exposure of the circle of friends and group chats , Repeatedly pushing the traffic.

In addition to the listener's carnival, the platform also began to calculate that it was even more important to attract traffic, and advertisers were obviously reluctant to miss this wave of heat.

At the Cui Jian video concert, Jihu Automobile became the exclusive title, which was also the first time the video concert was successfully commercialized. According to the data disclosed by the polar fox, on the night of Cui Jian's concert, Jihu exposed 1.2 billion times in WeChat ecology, and the live broadcast room shared more than 2.7 million times.

After trying the sweetness of the video number concert, Jihu once again named the Luo Dayou concert on the evening of May 27. In addition to the brand in the live broadcast room, Jihu is also implanted in concert gifts, jumping advertisements, and customized benefits. Users can click the link to enter the Jihu test drive registration page and get relevant subsidies and benefits.

In addition to the title, the video number is also conducting other commercial attempts, such as selling peripherals during Jay Chou's concert. Taking the concert on the evening of May 20 as an example, a fisherman hat worth 79 yuan, an estimated sales of 1.6W, estimated sales exceeding 300W.

Douyin's Sun Yanzi singing chat has not seen obvious merchant sponsorship operations for the time being. In many previous concerts, it seems that she has not seen a business model other than paying for viewing.

A feelings of feelings have become a set of facts to swipe screens. Whether it is Douyin or the video number, it is becoming more and more proficient. Just on the road of commercialization, the two seem to have different ideas: Douyin is still cautious, and the video number has taken a step forward.