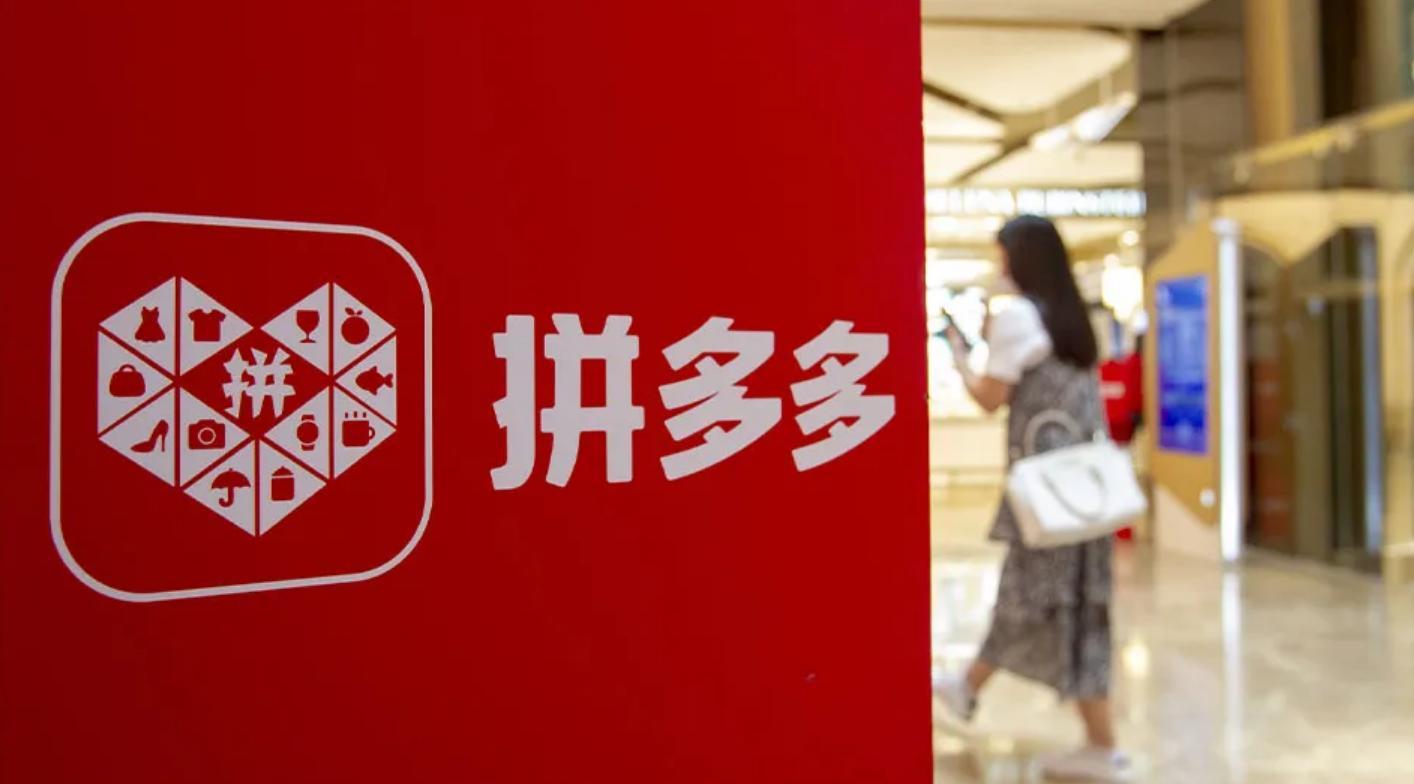 On the evening of May 27, Beijing time, Pinduoduo released its financial results for the first quarter of 2022. During the reporting period, Pinduoduo's revenue reached 23.794 billion yuan, up 7% year on year; Net profit attributable to common shareholders was rmb2.60bn, compared with a net loss of RMB2.905bn in the same period last year. In the 12 months ended March 31, 2022, pinduoduo had 881.9 million active buyers, an increase of 7% year-on-year.

Overall, Pinduoduo posted better-than-expected results for the quarter, sending its shares up 15.19 percent to $48.30 per share by the U.S. stock market close on Thursday, giving the company a market value of $61.07 billion.

As a matter of fact, the company revenue and subscribers are maintain in low growth state, the spell of the chairman and chief executive officer Chen lei said at a conference in earnings "inevitable", and suggests that "we don't focus so hard on this quarterly fluctuations, and should focus on what we're doing can create value, the growth of high quality" for the company.

In the first quarter of 2022, Pinduoduo's revenue growth mainly came from increased revenue from online marketing services and transaction services, according to the earnings report. Among them, online marketing services revenue reached 18.158 billion yuan, up 29% year on year; Transaction service revenue was 5.591 billion yuan, up 91 percent year-on-year, and the combined growth rate was 39 percent year-on-year. The latter, by contrast, contributed only 43.9 million yuan to a 99 percent drop in revenue as the company continued to strategically shrink its proprietary business.

That offset pinduoduo's 7 percent quarterly growth, the second-lowest revenue growth since going public in 2017, behind the 3 percent growth in the fourth quarter of 2021. 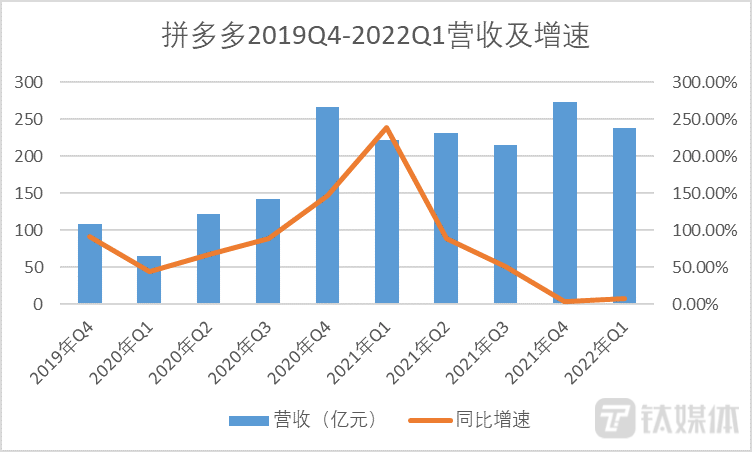 In response, Chen Lei said,In the past period of time, Pinduoduo has been adjusting its development strategy, focusing more on r&d and agricultural investment, and pursuing long-term and high-quality development. It takes a certain amount of effort and time for such adjustment to bring about results, so the growth rate may be affected in the short term. Moreover, with such a large base of users, the long-term trend is clear: slower growth is inevitable, despite quarterly fluctuations.

In fact, not only Pinduoduo, but its competitors posted "the lowest revenue growth since going public" in the first quarter of 2022. It is worth noting that aside from the end of the e-commerce dividend period, the impact of the epidemic has become the target of "public criticism", and Chen Lei unsurprisingly talked about relevant aspects.

Like many of its peers, Pinduoduo has actively used its advantages to provide services to consumers during the epidemic, he said. During the process, I felt that there were some deficiencies in the operation of the whole company, such as the perception of market changes and the understanding of consumer needs, and there was still a lot of room for improvement. "This is the biggest impact of the epidemic on us."

Therefore, "Pinduoduo's current focus remains on better serving its existing users, being consumer-oriented, consolidating their trust in the platform and improving their minds. And hopefully through research and development, through investment in agriculture, through creating value for consumers."

In fact, for more than a year under Mr. Chen's leadership, Pinduoduo has been cutting back on marketing and spending more on research and development, especially in agriculture.

Reflected in the financial results: In the first quarter of 2022, Pinduoduo's sales and marketing expenses decreased by 14% year-on-year to 11.219 billion yuan, and the proportion of pinduoduo's revenue also further decreased to 47%, from 59% in the same period last year. At the same time, research and development expenses hit a record high, rising 20 percent year-on-year to 2.668 billion yuan, due to the growth of staff numbers and the recruitment of more senior research and development personnel.

That was followed by better earnings. This quarter, Pduo Duo's net profit attributable to common shareholders was 2.60 billion yuan, a year-on-year loss, and a significant decrease from 6.62 billion yuan in the previous quarter, mainly due to the one-time rebate provided by pduo Duo's technical service provider in the fourth quarter of last year. Although the exact amount is not known, it is said to have contributed a significant part of the quarterly profit.

But even after four consecutive quarters of profitability, Pinduoduo claims profitability is not a current priority. Liu Jun, its vice president of finance, explains,"Over the past several quarters, our profits have continued to be driven by the release of operating leverage, particularly a reduction in marketing expenses. We have also reined in spending in the face of lower growth."

"But with increased competition, we still have a lot of room for improvement in serving our customers." Therefore, Liu Jun said,Pall Needs to ramp up investment, which could lead to volatile quarterly profits in the future.And the profitability of the past few quarters gives it more confidence to continue investing for the long term.

Chen is also a firm believer that investment in R&D can lead to high-quality development. "We will continue to increase our investment and this will be reflected in our future financial results."

In agriculture, he said, the team and he have spent a lot of time and energy over the past year evaluating projects and figuring out how to use funds where they are most needed. Some progress has been made, but enabling agriculture through technology is a matter that requires great care and patience.

"We have a long-term strategy in this area. Overall, the current spending is still in the early stages." According to Chen Lei,For such a large investment field, neither the investment cycle nor the intensity of investment will be affected by short - and medium-term fluctuations.

Referring to the outlook for the next few quarters, Liu Jun said that conversion rate or monetization rate is not a predictable indicator and suggested not to pay attention to fluctuations between quarters. In the long run, pinduoduo's monetization rate depends on how much value it creates. "We will continue to adhere to the 'zero commission' policy for agricultural products to fully support farmers and merchants; It also repeatedly said it would invest more in agriculture to improve consumer experience.As the proportion of agricultural products increases, monetization rates may be affected.”

Related news
Tencent Q1's net profit of 108.1 billion yuan was 29.4 billion yuan, a year-on-year increase of 6%
Fast Ray's 2020 Q1 report: revenue $48.3 million year-on-year growth of 16.9%
After Tencent's Q1 financial report, the market value of Tencent hit a new high
Xiaomi Q1's performance against the trend grew faster than expected, and the two engine strategy continued to achieve results
Global smartphone shipments fell 11% year-on-year to 314 million units in Q1, according to the data
Pinduoduo Q1 revenue of 23.8 billion increased by 7% Technology and agricultural strategy into a dual engine
Pinduoduo: Q1 R&D expenses increased 20% year on year, while marketing expenses decreased 14% year on year
Pindong DUO Q1 "small rebound" : reduce marketing and r & D strategy is effective, adhere to increase investment in the future | look at the financial results
Hot news this week
China has found 35 known cases of the new zoonotic virus Langya
Losses in a single quarter of $ 23.4 billion a record, SoftBank did not carry the plunge of technology stocks and the devaluation of the yen
The prevention and control of the American Monkey epidemic has failed. What should I pay attention to?
Kuaishou launched a self-developed cloud intelligent video processing chip: The chip has been streamed successfully
The new product of Xiaomi MIX is coming: both internal and external dual -screen has been upgraded to make up for the previous generation.
Ministry of Public Security: Single telecommunications network fraud continues to cause 40 % of all electrical fraud cases
A new zoonotic virus, Langya, found in China has not yet been confirmed to be transmitted from person to person
A tech company in Shanghai has been fined 220,000 yuan for swiping orders to improve its ranking on Yelp
Special price "kill ripe"? Bike-sharing platforms have different prices for the same package for different users
Alibaba: Shareholders SoftBank will settle in advance for advanced payment in advance involving a maximum of about 242 million ADR
The most popular news this week
Google Fiber's home has been silent for many years and continues to expand after many years
Gurman: Apple is going to expand advertising into the new iPhone/iPad area
Studies have shown that the attacks by the game company have doubled in the past year
Apple's new iPad does not support 3.5mm headphone hole, Baidu map big update, anchor adopted two protected plants were checked, Rui Dragon 7000 series price stolen, these are the o...
A proposed ban on Internet addiction in California has failed
Industrial star attraction strategy to cope with the American semiconductor strangulation strategy
"Mother of the Chip" suffers! The United States blocked EDA to China: not so simple
8K Super Clear screen records Lingyue of China Space Station! Only 0.72 seconds
Sell to Tencent less than a year Sogou by the big purge: three major businesses are gone
After being suppressed by the United States, why did Ren Zhengfei thank you?