It is reported that the honor development group is the earliest core user group created by the MIUI forum, which is a group of enthusiastic rice noodles from the Xiaomi community special group and loves Xiaomi, in addition to submitting centralized BUG and functional suggestions, it will also assist the official in making relevant business reports and important announcement notices.

Officially, The Xiaomi Community Honor Development Group will continue the tradition of submitting BUGS and suggestions from the previous Rong Group.On this basis, we will continue to assist Xiaomi or the MIUI development team to communicate with users in the community, sort out centralized feedback in the circle, suggest the section, track feedback proposals, and collect feedback logs. 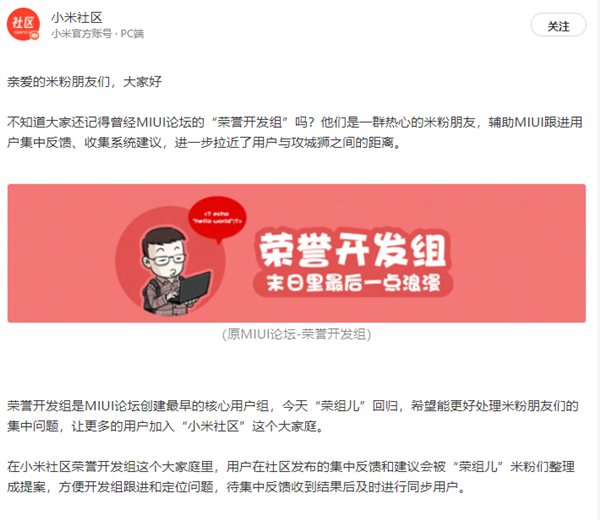 It is worth mentioning that according to Xiaomi's first quarter performance report in 2022, as of March 2022,Xiaomi's global MIUI monthly active users reached 529 million, an increase of 104 million year-on-year;Chinese mainland MIUI has 136 million monthly active users, an increase of 17 million year-on-year, achieving growth for six consecutive quarters.

Related news
Xiaomi guanxuan: MIUI 12 officially set sail!
MIUI 12, Xiaomi's dream of ten years, officially appeared
Xiaomi so preferential "nail households ": three years ago Xiaomi 6 can also rise MIUI 12.
MIUI 12 evaluation: an upgrade that may bring the domestic Android system to a new height
Speed! Official confirmation: MIUI 12 based on Android 11 will be released soon
Xiaomi announced the first time in 10 years that the development version of MIUI 12.5 was stopped
Xiaomi: Yang Qian became the spokesperson of Xiaomi Civi
MIUI development version upgrade! 4G was "discriminated against"
MIUI monthly active users exceed 500 million! Xiaomi's honor development team announced its return
Hot news this week
China has found 35 known cases of the new zoonotic virus Langya
Losses in a single quarter of $ 23.4 billion a record, SoftBank did not carry the plunge of technology stocks and the devaluation of the yen
The prevention and control of the American Monkey epidemic has failed. What should I pay attention to?
Kuaishou launched a self-developed cloud intelligent video processing chip: The chip has been streamed successfully
The new product of Xiaomi MIX is coming: both internal and external dual -screen has been upgraded to make up for the previous generation.
Ministry of Public Security: Single telecommunications network fraud continues to cause 40 % of all electrical fraud cases
A new zoonotic virus, Langya, found in China has not yet been confirmed to be transmitted from person to person
A tech company in Shanghai has been fined 220,000 yuan for swiping orders to improve its ranking on Yelp
Special price "kill ripe"? Bike-sharing platforms have different prices for the same package for different users
Alibaba: Shareholders SoftBank will settle in advance for advanced payment in advance involving a maximum of about 242 million ADR
The most popular news this week
Google Fiber's home has been silent for many years and continues to expand after many years
Gurman: Apple is going to expand advertising into the new iPhone/iPad area
Studies have shown that the attacks by the game company have doubled in the past year
Apple's new iPad does not support 3.5mm headphone hole, Baidu map big update, anchor adopted two protected plants were checked, Rui Dragon 7000 series price stolen, these are the o...
A proposed ban on Internet addiction in California has failed
Industrial star attraction strategy to cope with the American semiconductor strangulation strategy
"Mother of the Chip" suffers! The United States blocked EDA to China: not so simple
8K Super Clear screen records Lingyue of China Space Station! Only 0.72 seconds
Sell to Tencent less than a year Sogou by the big purge: three major businesses are gone
After being suppressed by the United States, why did Ren Zhengfei thank you?