The FTC increases its antitrust investigation into Amazon: reorganizes the investigation team and asks questions about the acquisition of MGM 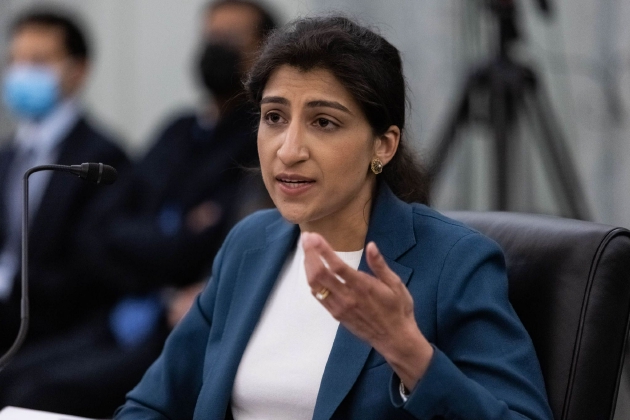 Sina Technology News On the morning of June 1, Beijing time, it was reported that the Us Federal Trade Commission (FTC) was stepping up its antitrust investigation into Amazon, reorganizing the investigation team, re-interviewing possible witnesses, and asking questions about Amazon's recent acquisition of MGM Pictures.

Since 2019, the FTC has been conducting antitrust investigations into Amazon's retail and cloud computing businesses. Lina Khan, who became chair of the FTC last year, is also known for her groundbreaking legal documents on Amazon's possible antitrust violations, so she herself is interested in the investigation.

According to people familiar with the matter, Lena Khan has assigned the case to John Newman, an antitrust professor and former prosecutor at the U.S. Department of Justice. Newman joined the FTC in December as deputy director of antitrust. Since taking over the investigation into Amazon, Newman has restructured the investigation team, the source said.

The FTC declined to comment on the restructuring of the investigation team, and Amazon did not respond to it.

Two people familiar with the matter said that during Trump's tenure as US president, the FTC's antitrust spearhead was mainly directed at Facebook, while only two ordinary lawyers were assigned to investigate Amazon.

Prior to joining the FTC from Columbia Law School, Lena Khan served as a staff member on the U.S. House Of Representatives Antitrust Subcommittee. The commission spent 16 months investigating Meta, the parent company of Google, Amazon, Apple and Facebook. Lena Khan focused on the Google part of the report, while an FTC staff member was in charge of the Amazon part.

The committee's report was released in October 2020, but until last summer, the FTC's investigation did not make a new breakthrough outside the report, people familiar with the matter said. After Lena Khan became chair of the FTC, she helped investigators reformulate their investigative strategies and direction. Subsequently, THE FTC's lawyers began investigating some of the issues with Amazon's AWS cloud computing business and the recent Amazon deal for $8.45 billion to buy MGM.

Amazon said in March that the FTC reviewed the deal without raising any questions, and amazon subsequently completed the deal. The FTC declined to comment directly on the deal at the time, but said in a statement that the agency "did not explicitly approve the deal, so it could be challenged at any time if it is determined that the deal is illegal in the future." According to people familiar with the matter, THE FTC's lawyers have been learning how the deal to buy MGM would affect Amazon's Prime video service.

At the same time, Amazon has also tried to exclude Lena Khan from the investigation, arguing that her past academic work means she should avoid suspicion in the FTC's investigation. Facebook has tried this before, but was rejected by the FTC and related U.S. federal judges.

The FTC isn't the only U.S. government agency that is investigating Amazon. Previously, the Washington state attorney general launched an antitrust investigation into Amazon about price manipulation. In response, Amazon agreed in January to pay a $2.25 million fine and halt a project that had a pricing agreement with a third-party seller.

In addition, The District of Columbia Attorney General Karl Racine also filed a lawsuit against Amazon last year, saying the company encouraged excessive pricing of goods through special policies to ensure a minimum profit per item, while preventing platform merchants from selling goods at lower prices on other platforms. A U.S. high court judge dismissed the lawsuit in March, but the District of Columbia is continuing the appeal with the support of the Biden administration. At the same time, regulators in Europe are also investigating Amazon's policy towards platform merchants.

Related news
U.S. Department of Justice and FTC reach an agreement to increase anti-monopoly review of Amazon
The US government reached an anti-monopoly division: FTC monitors Amazon, the Ministry of Justice is responsible for Google
Us FTC:, we repair the technology monopoly giant will not punish some money.
Us FTC expands the scope of anti-monopoly review on Amazon to cover cloud computing business
Facebook Zuckerberg personally goes to FTC to testify in response to antitrust investigation
FTC has been accused of "internalizing" Facebook's monopoly case through administrative means
Amazon has become a thorn in the side of the new chairman of the FTC
The FTC increases its antitrust investigation into Amazon: reorganizes the investigation team and asks questions about the acquisition of MGM
US FTC enters a more radical antitrust mode: prosecution blocking Meta acquisition of VR manufacturers
Hot news this week
At least 29000 facilities were affected, and WeiUnicom announced that there were serious loopholes in QTS and QuTS hero.
The source code of the official website shows that the Microsoft Build 2023 developer Conference will be held on May 23-25.
The rendered picture of Meizu experience Center is exposed: there are cars and mobile phones to build 1000 stores.
Musk, the richest man in the world, also suffered a huge loss when he bought bitcoin by Tesla, who "cut leeks".
256G is not enough! Bloggers bought Xiaomi phone 512G has used up more than 300G: WeChat accounted for 70G
Xiaomi tablet 6 key specifications steal run: high brush domestic screen Snapdragon 870 can also play!
Beihang Professor unveils FIG Leaf, consumer anger, Why is advanced technology difficult to win user recognition?
Regret that the medicine is gone! Apple closes downgrade channels for multiple versions such as iOS on 16-15-12.
Only high-end models have? The exposure of the periscope camera lens is limited to the iPhone 16 Pro Max
Meta earnings release analysts: Snap turning profit into loss in the fourth quarter is good news for it and Google
The most popular news this week
Microsoft's new version of Bing appears briefly: full access to ChatGPT
Bill Gates: the history of ChatGPT is as significant as "PC or the birth of the Internet"
Why does the United States keep cracking down on Huawei, but we don't do anything to Apple?
Samsung promises firmware update to solve the problem of plummeting Pro SSD health value
AI such as CEO:ChatGPT, parent company of "GTA5", will raise standards in the game industry.
Huawei's entry into the electric bicycle Tailing official announced that the combination of strong and powerful forces will open a new era.
Huawei P60 appeared and ran: it was quite unexpected to carry the processor.
Yingchi set foot in the game display for the first time: 27-inch 2K screen, 165Hz high brush
Who says Jixian can't play games? Evaluation of Lenovo's new Pro 16 2022 sharp dragon version
Domestic version of ChatGPT! Baidu version has successfully registered ERNIE trademark: opened in March