Sources hinted that "Overwatch 2" will be a free game

IT House News on June 12, the party @Thesnitch brought some news about "Overwatch 2", but this time was a bit "special".

He sent a headless words on Twitter, but some netizens found that this sentence was actually consistent with the content of the case in the promotional video released in 2015. However, he changed the last sentence "WeareoverWatch" in the video to "Wearefreetoplay (we can play for free now)", suggesting that the new game will be a free game.

It is worth mentioning that@TheSnitch broke the news list and release date of Sony Stateofplay one day in advance, as well as the release date and platform of "Last Survivors" (Early Reconstruction Edition). Wait. 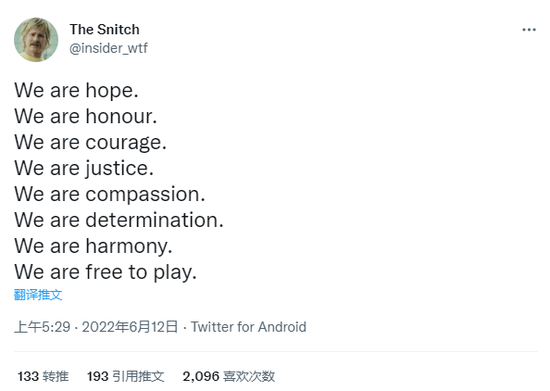 The IT House learned that the "Return of Overwatch 2" test has officially opened in April this year. The multiplayer game part has been provided for free of OW1 owner, so it is not impossible for Blizzard to launch it for free for all players.

At present, Blizzard has confirmed that the live broadcast of Overwatch 2 will be held on Thursday, June 16. It seems to be preparing to announce some new information, such as the next PVP test version. 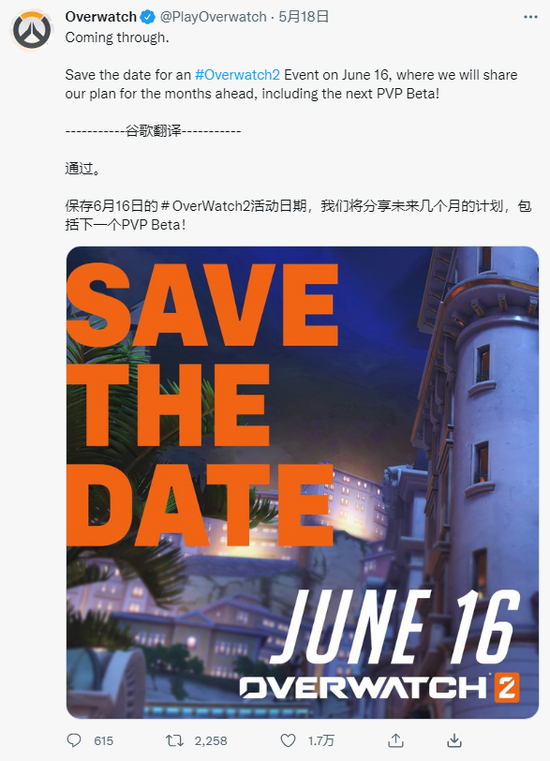 At this stage, the game charging mode is mainly divided into: props charges, buying out charge and point card charges. Blizzard's "Hearthstone Legend" belongs to props charges, "World of Warcraft" belongs to the point card charges, "Overwatch" is a buyout system, you can get permanent games at one time. The collection version is 329 yuan. Due to the great decline in the heat, this game has been reduced by many times or even freely.

Related news
< Watch Pioneer 2 > exposure: blizzard will be released on November 2
Watch the vanguard players can see the elegant demeanor of NVIDIA reflex, which brings up to 50% delay reduction!
I NEED A LOVE SPELL THAT WILL MANIFEST AWESOMESPELLTEMPLE
Another core Blizzard employee left to create the "Overwatch" character design
After the 5v5 test was officially announced, "Overwatch 2" appeared on Weibo hot search
Sources hinted that "Overwatch 2" will be a free game
Blizzard's "tearing" commitment! "Overwatch 2" will be completely unable to play after the launch of "Overwatch 2"
Hot news this week
Chinese mysterious female rich 560 million buy European luxury homes: the full amount of cash is paid at a time
Do you make feed after Yi Lord? Zhenghong Technology M & A has mystery
The 560m Chinese woman who bought luxury homes has also been involved in JD.com's investments in Tuniu, Vipshop and Fafa Qi
Son's bet that ARM's listing will boost SoftBank's stock price?
China's first "smart factory" for offshore oil and gas equipment manufacturing has been put into operation
The first metasurverse international standard alliance was established, Huawei, Ali, Apple, Google absent
The largest professional wholesale market was granted an Internet payment license, and 449 million yuan became the actual controller of Fastlink
'We're all going to die' if South Korean government doesn't fix Semiconductor industry, former Samsung executive says
More than 200W fast charge! Exposure of the IQOO 10 series should be on the self -developed small chip
Jingdong Technology announced the launch of the "Help micro double" campaign, which plans to triple the number of small, medium and micro services in the next three years
The most popular news this week
Huawei band 7 firmware update added wechat pay
NASA Men's Lunar Lunar Monthly Plan starts the first small spacecraft to explore the road
The cost of LG Energy in the U.S. Factory increases by 300 million US dollars: will re -evaluate the plan
Foreign media: Private equity giant KKR withdraws from Toshiba's potential bidding
Youku sued "Paradise Movie" App for copyright infringement involving "Wolf Warrior 2" and "July and Life"
Black Sesame Intelligent CEO Single Standard: A large computing chip from testing to mass production, at least two years
Facebook explores Voice chat: Testing Discord audio channels in groups
Giant Network: a subsidiary of an equity subsidiary sold its 25.73% stake in the company for about $2.2 billion
Tacks responded that more than 10 people will be charged for basic edition: false news
British media: NASA prevents the auction of Yueyang and the dead cockroaches of the edible monthly sun