Hot IP is back! The Squid Game has been announced for season 2.

Netflix officially announced the news on Twitter, and the Squid Game writer, director and producer Hwang Dong-Hyuk Nyeon wrote in a fan letter: "It took us 12 years to bring season 1 of The Squid Game to life, and it took just 12 days to become the most popular Netflix series of all time. As writers, directors and producers, we send out a huge thank you to our fans around the world for watching and enjoying our show...... Join us once again for a whole new season."

The first "Squid game" was released in September 2021 and went on to become the most watched TV series in the world. In its first 28 days, the series racked up 111 million views worldwide, making it Netflix's most-watched series ever.

Netflix's stock surged in the fourth quarter on the global popularity of The Squid Game, hitting an all-time high above $700 in mid-November.

However, since the beginning of this year, as the US growth stocks suffered a setback under the Environment of interest rate hike by the Federal Reserve, coupled with the weak growth of Netflix's paid users (even the first negative growth in a decade in the first quarter), Wall Street investment banks have downgraded the rating of Netflix, and Its stock price has also fallen rapidly, experiencing a "knee cut". As of Friday, Netflix shares were down 69% so far this year. 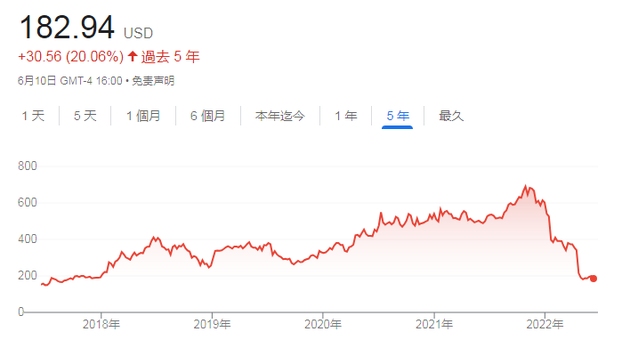 Netflix's stock price over the past five years

In April, Netflix reported its first subscriber decline in a decade, and the job cuts were announced soon after. Netflix's production budget has also been tightened almost across the board in an effort to save money, which could cause some headaches for the second installment of the Squid Game.

Netflix did not say when the new season would air. Previously, director Hwang Dong-hyuk revealed in an interview that the next season of The Squid Game is expected to be released in late 2023 or 2024.

Will the return of the second installment of the Squid Game be a turning point for Netflix? It will be interesting to see.