Build a false e-commerce platform, create the illusion of merchants entering, step by step to lure victims to invest... A new Internet legerdemain aimed at merchants of traditional entity industry is strong and needs to be vigilant. 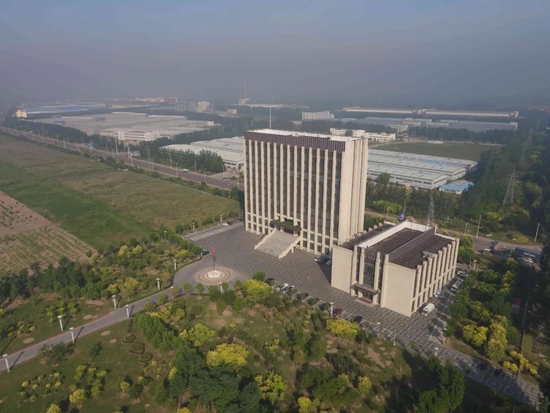 Photo by Li Kun of an e-commerce industrial park

"Hello, Mr. Liu, I am the customer service of D Company. We are engaged in Internet operation and promotion services. We understand your needs in this regard, and we can help you build an e-commerce platform for free online and offline promotion...

When receiving advertisement to sell a kind of telephone before, Liu mou of Sichuan can habitually refuse and hang up. In September 2020, a telephone call about "Internet operation promotion", Liu hesitated, considering to expand their own business, then holding a try mentality agreed.

D company manager Zhou met Liu offline, proposed to provide free operation and promotion services for Liu to create an e-commerce platform, and attract other businesses to enter. "Merchants need to pay the entry fee, we according to 30 points, we three, you seven. You will also get a certain amount of revenue from the merchants that enter and generate transactions on the platform." Some said.

Shortly after the network platform was set up, a Shanghai technology Co., Ltd. contacted Liu, saying that a number of businesses want to enter the network platform, but the server can only accommodate 50 businesses, the rest of the business failed to enter, but also put forward the platform payment risk and other issues. Under the guidance of D company, Liu has bought a server, security controls and deal with commodity record qualification certificate to solve the problem.

A science and technology investment company in Anhui province contacted Liu, put forward the security risk of the platform, continue to use the platform for business reasons, let it expand the server, firewall and other services in D company.

Liu is convinced of D Company and has spent more than 400,000 yuan to solve various problems on the platform. In December 2020, when Liu contacted D company again, he found that D Company had been closed down by the public security organs. It suddenly dawned on him that he had been cheated.

The victims are mostly brick-and-mortar businesses

In November 2020, hubei police and Sichuan police jointly destroyed two dens of D Company. According to the introduction, after the audit, D company involved in a total amount of 36 million yuan, more than 100 victims, all over the country.

The public prosecutor of Gong 'an County in Hubei Province, which undertakes the case, introduced that such fraud cases are rare in the name of providing free e-commerce operation services and harvesting victims' money constantly.

"At that time, I went to D Company and met the manager, Mr. Zhou, to visit the environment and operation of the whole company. Mr. Zhou also organized a special meeting in the company to introduce their professional advantages to me in detail." Liu told reporters, at that time completely did not expect this will be a fraud company.

Prosecutors told reporters that the e-commerce platform does not have normal networking, settling, trading and other functions, and the businesses, transaction data, dynamic information and other information on the platform are the illusion of D Company gang to confuse the victims, through technical means fictitious operation.

During this period, the victims did not only invest unprofitably, but the investments far outweighed the gains. Police introduction, Liu through the platform withdrawal a total of 80,000 yuan of business funds, he thinks that through continued investment, to solve the problems of the platform can get more income, but did not expect D company, investment company, business was a group of people.

Prosecutors introduced, the victims are engaged in the traditional entity industry businesses, they have a little knowledge of the Internet, but there is an urgent need for network promotion, so become the target of fraud gangs "customers".

Police and prosecutors say new types of cyber crimes using the Internet and other technologies have become more frequent in recent years, and more efforts are needed to crack down on them. At the same time, in the face of similar case so-called "37 points high yield" temptation, to enhance vigilance, seriously distinguish.