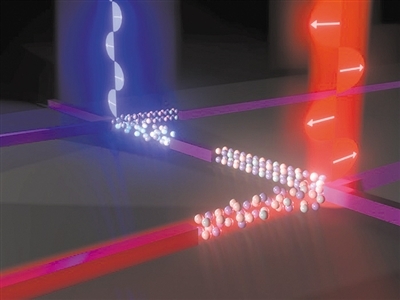 Since the invention of the first integrated circuit in 1958, packing more transistors into electronic chips of a given size has been the preferred way to maximise computational density. However, artificial intelligence and machine learning require specialized hardware to push the boundaries of existing computing, so the main question facing the field of electrical engineering is: How do you pack more functionality into a single transistor?

The advantage of photonics over electronics is that light is faster and more powerful over large bandwidths. The goal of the new research is to take advantage of these advantages of photonics combined with tunable materials for faster, more intensive information processing.

So for more than a decade, Researchers at Oxford University have been working on using light as a means of calculation. The team developed a yudhoyono (hybrid active dielectric) nanowires, the nanowires using a glass material, mix the materials in the optical pulse irradiation with switchable properties, each of the nanowires are shown for a specific selective response of the polarization direction, therefore can use multiple polarization in different directions at the same time processing information.

Using this concept, the researchers developed the first photonic computing processor that utilizes the polarization of light. The photon calculations are carried out through multiple polarization channels, and the nanowires are modulated by nanosecond pulses of light, making them faster than conventional electronic chips and increasing the computational density by several orders of magnitude.

Researchers say this is just the beginning of what people can hope to see in the future, and that this polarized photonic computing processor, combining electrons, nonlinear materials and complex calculations, is already a super exciting idea.

As conventional electronic chips get smaller and the number of transistors on them nears its limit, Moore's Law is increasingly reaching the ceiling. In recent years, scientists and engineers have been looking for new "growth points" for chip development, one of which is using photons to compute. For example, in 2015, American scientists developed an optoelectronic chip that processes information using light. It still uses electrons to calculate, but can process information using light directly. The results take advantage of the polarization properties of light. All these studies provide more possibilities for chip iterative upgrading.