CCTV website news:Relay build tiangong, dream zheng Qiongyu. On June 19, the Shenzhou 14 crew had been in orbit for two weeks. During their stay in orbit, the astronauts will complete many tasks, including the assembly and construction of China's space station in orbit. Therefore, Chen Dong, Liu Yang and CAI Xuzhe are also called "the busiest space travel trio". 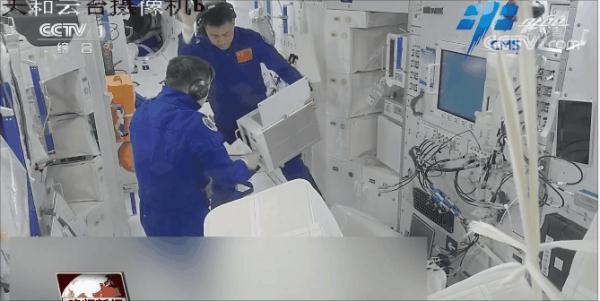 While in orbit, the astronauts have been taking vlogs to record the details of life and work. Not long ago, the official video program of China's manned space program "Tiangong TV" was officially new in its third season, and updated its second episode today. The second episode begins with the crew setting up the water supply system after entering the space House. In addition to regular water supply, the space station also uses water recycling to ensure the astronauts' daily drinking water needs. In space life, each astronaut needs to drink 2 kilograms of water per day, so re-setting the water supply system and water quality testing is an important work to ensure water safety. I saw two commanders Chen Dong and CAI Xuzhe, first remove the outer packaging, and then according to the manual for equipment debugging.

Since the water stored in orbit is not running, microbial testing of water samples needs to be completed after the water dispenser is set up. We can see in the picture that Liu Yang is wearing a mask for microbial water sample testing. Regular testing is also to avoid bacteria breeding and affecting the health of astronauts. Experts say some microbes can also affect the space station's material structure and easily cause equipment failures, so regular sampling and testing is necessary.

At present, the astronauts have basically completed the "unpacking" and are further carrying out in-orbit scientific experiments. We also hope that they will bring us more wonderful Tiangong Vlog.

Just now, as we mentioned, Chen Dong, Liu Yang and CAI Xuzhe are the three most busy astronauts on space business trips. So what do they have to do for six months? Let's find out.

During its stay in orbit, the Shenzhou 14 flight crew will welcome the space station's experimental modules "Question Sky" and "Dream Sky". Shenzhou 14 astronauts will also welcome tianzhou 5 cargo spacecraft, Shenzhou 15 manned spacecraft visit docking, and shenzhou 15 flight crew rotation in orbit. In addition, they will use the airlock module for the first time to conduct two or three extravehicle activities, as well as "Tiangong Class" space classes and other public welfare activities.