Original headline: Bloomberg: Of the world's 20 fastest-growing chip companies, 19 are from mainland China

China's chip industry is growing faster than anywhere else in the world, according to new data.

In the past four quarters, 19 of the world's 20 fastest-growing chip companies have come from the Chinese mainland, according to data compiled by Bloomberg. That compares with eight in the same period last year. In terms of growth rates, Chinese suppliers of the design software, processors and equipment essential to chip manufacturing are several times larger than big semiconductor companies such as TSMC or ASML.

The $550 billion global semiconductor industry plays a huge role in everything from defense to artificial intelligence and self-driving cars. From 2020, the United States initiated technology sanctions against semiconductor companies in Mainland China, which affected SMIC, Huawei and Hikvision to varying degrees, but also promoted the prosperity of chip manufacturing and supply in Mainland China.

The Chinese mainland will unleash billions of dollars of investment in semiconductors under ambitious plans such as its "Little Giant" blueprint, and encourage homegrown alternative strategies to evade US sanctions, with Apple considering Yangtze Storage as a supplier of flash memory for its latest iPhone.

"The biggest underlying trend is mainland China's search for supply chain self-sufficiency driven by the pandemic," Phelix Lee, an analyst at consultancy Morningstar, wrote in an emailed response to a Bloomberg inquiry. "During the pandemic, mainland Chinese customers need to source local products to ensure that alternatives operate smoothly."

In 2021, the Chinese mainland imported a whopping $410 billion worth of chipsets. Chipmakers from overseas suppliers grew 58% last year as mainland China expanded capacity, which in turn boosted local business.

According to the China Semiconductor Industry Association, the total sales of chip manufacturing in mainland China, which includes manufacturing and design companies, jumped 18 percent in 2021 to a record above 1 trillion yuan ($150 billion). 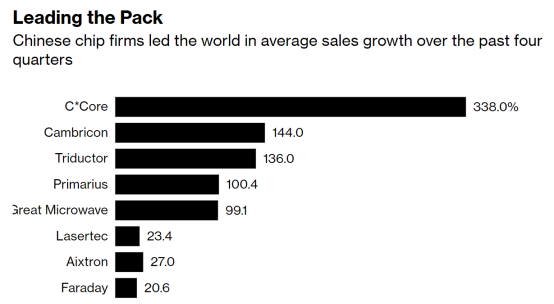 Smic and Huahong semiconductor have kept their Shanghai plants running at nearly full capacity despite the COVID-19 pandemic that has crippled factories and logistics across mainland China since 2020. With the help of the local government, cargo flights from Japan delivered the necessary materials and equipment to the chip plant. Smic recently reported a 67 per cent rise in quarterly sales, outpacing rivals Semiconductor Semiconductor and TSMC.

The company, which has pledged to expand its offerings into electric vehicles and artificial intelligence in the future, reported average revenue growth of 37 percent. Design tool maker Guren Electronics has doubled its average sales over the past four quarters, and reports say it develops software that can be used to make 3nm chips.

Phelix Lee, an analyst at Morningstar, said aggressive capacity building by mainland Chinese companies would boost their global presence: "There is no doubt that Chinese chipmakers can generate revenue growth from autos, consumer electronics and other sectors in the coming years."