This means that The country's fourth largest operator, China Radio and Television will be officially launched.

As previously reported, the official countdown for the 5G official account has begun,There are still 3 days left, China Radio and Television 5G network service will officially meet with everyone, is expected to be fully released on June 27. 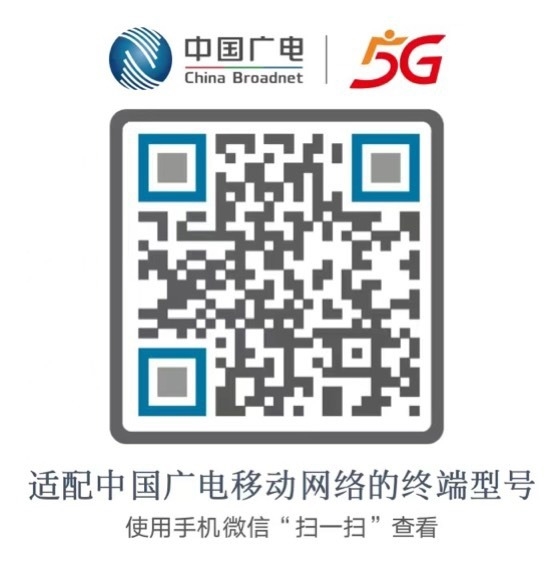 At present, the official has also published a list of mobile network compatible terminal models, you can go to the official website or scan the code to see if your phone supports.

According to the page, as of June 24,A total of 126 mobile phones have been upgraded to support China's radio and television mobile network recently, covering mainstream models of 12 brands such as Apple, Xiaomi, Huawei, Honor, OPPO and Vivo. 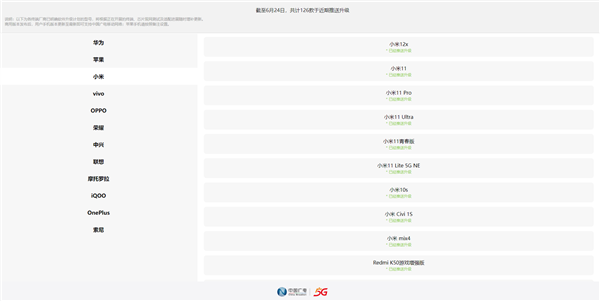 At present, Xiaomi and ZTE have the fastest adaptation in the Android camp, with more than 10 models already adapted. Other manufacturers will gradually push the upgrade after June 24.

As for Apple, all 16 models released after September 2018 support the RADIO and television 4G network service, which requires users to manually set up and turn it on. VoLTE” Function. 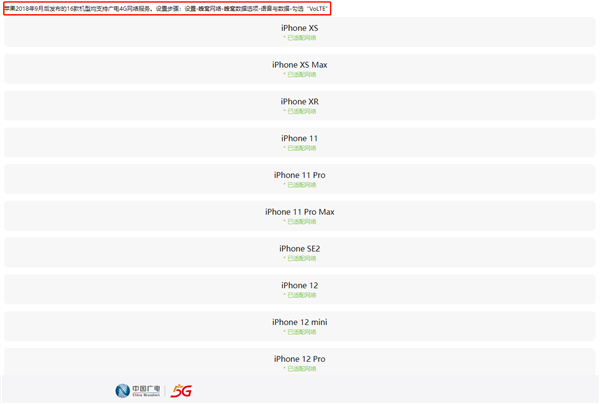 Related news
The History of the Development of the iPhone Camera
HUAWEI M-Pencil magnetic absorption keyboard HuaweiMatePad 10.8 experience
The English name of Chinese liquor has been changed: Chinese Baijiu has been officially launched
Chinese radio and television adaptation models announced: Millet/Huawei and other 126 available iPhone special
Hot news this week
Young people can't change their mobile phones one brother pressure in the channel inventory up to 50 million
Chinese mysterious female rich 560 million buy European luxury homes: the full amount of cash is paid at a time
Criminal gang candid courier list takes the money 8 people to be arrested
Do you make feed after Yi Lord? Zhenghong Technology M & A has mystery
Internal personnel have caused players to contradict? Netease "Yin Yang Shi": Impossible!
The first pop -up shop in the United States opened, Bubble Mart opened the North American expansion plan
The goose factory is finally making a move on the metasverse?
Big news! The police report henan village banks can not withdraw cash case, has captured a number of suspects
With this charging treasure that can legal "stealing electricity", I don’t worry about the mobile phone out of power
Tesla has lost nearly $600 million after the richest Chinese lost 89% of his net worth in the bitcoin crash
The most popular news this week
The iOS 16 upgrade is no longer supported on the iPhone 6s
Apple M2 version of MacBook AIR July Sale: Magsafe Return
Activision Blizzard CEO Bobby Kotick kept his seat on the board
Apple's best-selling product is getting an update! New AirPods Pro Exposure: Heart rate monitoring, USB-C support
Huawei's new generation of "small table" Watch Fit 2 on the shelves: Support Bluetooth call
Provide abortion travel benefits! Giant companies "resist" US Supreme Court
The Google Pixel 7 Pro will have a Samsung display: brighter than the Pixel 6 Pro
Nokia Style+5G new machine Pass FCC certification: 5000mAh battery+20W fast charge
Behind the collapse of the Mijia app, the lack of PLANB of smart homes
It is said that the Fuji XT5 camera will use 40 million pixel CMOS