On June 24th, the public account of "China Information China" stated that Zhiwang had a large number of personal information and important data such as national defense, industry, telecommunications, transportation, natural resources, health, and finance, as well as major projects, as well as major projects , Essays such as important scientific and technological achievements and key technology dynamics. 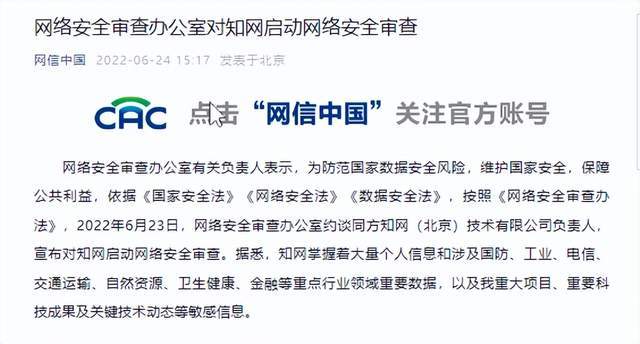 The relevant person in charge of the Cyber Security Examination Office stated that in order to prevent national data security risks, safeguard national security, and protect public interests, in accordance with the National Security Law, "Network Security Law" and "Data Security Law", in accordance with the "Network Security Review Measures", 2022, 2022 On June 23, 2013, the Cyber Security Examination Office interviewed the person in charge of Tongfang Zhiwang (Beijing) Technology Co., Ltd., and announced the launch of the network security review of Zhiwang.

It is worth mentioning that just more than a month ago, the State Administration of Market Supervision and Administration stated that according to the preliminary inspection, Zhizhi.com was suspected of implementing monopoly behaviors in accordance with the law.

In response to the investigation of the case, Zhiwang responded at the time that it resolutely supported and fully cooperated. "It will take this survey as an opportunity to inspect deeply, comprehensively investigate, completely rectify, and operate in compliance according to law ..." (Tang Guo)