God Thirteen Astronauts first appeared in Wang Yaping for the first time after returning home: there is a feeling of crossing

On the afternoon of June 28, Shenzhou -thirteen astronauts took the group Zhai Zhigang, Wang Yaping, and Ye Guangfu to return to 74 days later, and met with media reporters in Beijing Aerospace City. This is also the first time that the Shenzhou 13th astronauts have officially met the media and the public after returning to the group.

It is understood that at present, astronauts have a good physical and mental state, and the results of various medical examinations are normal. After completing the work of the restoration period and the summary of the health assessment, three astronauts will be transferred to normal training.

During the track of Shenzhou 13, Wang Yaping completed the first out of the cabin of Chinese female astronauts.

At the meeting, Wang Yaping said, "At the moment of out of the cabin, I felt like I opened the door of another world, drifted out of the cabin, and was in the vast universe and enjoyed the sky outside the sky. The beauty of the universe shocked me. The depth of the universe is unexpected, and the blue planet we lives is peaceful, beautiful and peaceful, which is an experience and feeling that has never been before. "

Wang Yaping said, relative to Shenzhou 10 mission,This mission gave her a feeling of crossing. This crossing not only comes from the new cabin space, but also from the comprehensive upgrade of the flight platform, and the comprehensive innovation of various technologies.

For more than 180 days, Shenzhou -13 Aerospace has carried out a large number of scientific experiments in space, jointly implemented two out -of -the cabin tasks, and also carried out two "Tiangong Classrooms". In addition, they spent their own space, New Year's Day, and Spring Festival in space.

At the same time, as the first space teacher, Wang Yaping also felt a lot. She believes that this time for the children to successfully build a bridge of aerospace and classrooms, the enthusiasm of the children also gave her a strong motivation to fly again and again for space teaching. "We opened the door of the Chinese Space Station to the ground class, and it also caused the children's all kinds of imagination, the desire for knowledge, and the imagination of space technology." 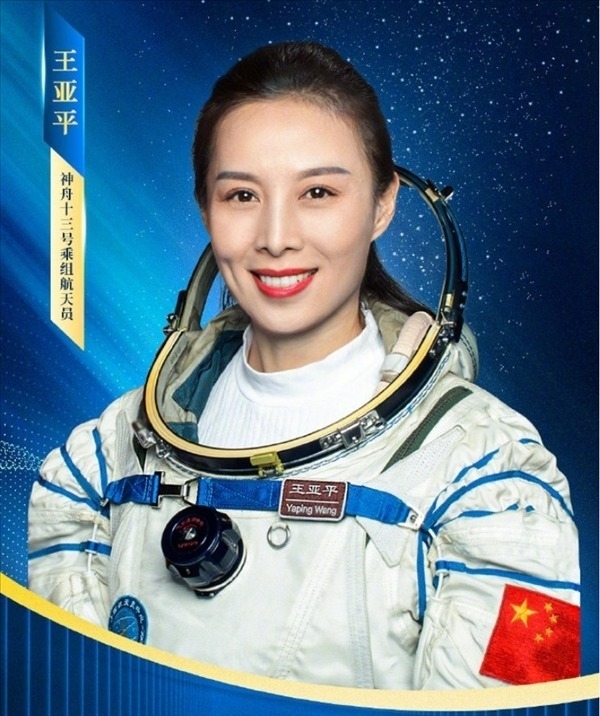 Related news
Armani, Alexander Wang into the Tmall, luxury goods under the outbreak ushered in online store boom
What exactly is Jim Keller thinking about leaving Intel chip God?
Shenzhou 13 astronauts enter Tianhe core module: What are the differences between male and female astronauts in space life?
Former NASA female astronaut Bless Chinese astronaut Wang Yaping: Billions of women are looking out of the window with your eyes
China Space Station's first space teaching event has been a complete success!
History first! China Astronaut will welcome the New Year in space
Astronauts greet the Spring Festival in space: Zhai Zhigangxiu calligraphy After writing the Spring Festival brush flew away
The picture of Chinese New Year's Eve night under space is beautiful Wang Yaping: The lights of the city are like flames
The blue planet from the perspective of the Chinese space station is simply breathtakingly beautiful: the strongest aerial photography!
God Thirteen Astronauts first appeared in Wang Yaping for the first time after returning home: there is a feeling of crossing
Hot news this week
Biden signed a chip and scientific bill, a video call of WeChat iOS internal test suspension window, the advanced CPU caused Win11 to be difficult to use, Huawei new machines enter...
How to regulate the "broken card" operation to crack down on electrical fraud to prevent "accidental injuries" with cards?
Musk's eyes! Lei Jun released a full -size humanoid robot Xiaomi self -developed strength explosion table
Japan has confirmed that China has overtaken the US for the first time in the world's top three indicators of scientific papers
iPad 10 will be absent from iPhone 14 conference: October appeared on Apple's last non -comprehensive tablet tablet!
The three major indexes of the US stocks opened sharply: ROBLOX fell more than 4%, Twitter and Tesla rose more than 3%
Kuaishou TOB business Yu Bing: Self -developed chips or mass production after the end of the year, the video must be turned into light industry
The global streaming media have increased the animation circuit is becoming a new "breakthrough" for Youaiteng
Meizu Pandaer Great: All products are reduced by 200 and 30 -containing mobile phone cases, heat dissipation back clamps
After selling Tesla for $6.9 billion, Musk said he was not selling it, but a survey said he was still selling it. The title of the world's richest man may not be guaranteed next ye...
The most popular news this week
The survey shows that nearly half of the US Android users consider changing Apple iPhone
New bottle of old wine! Industry insiders: No one has the best cost control than Apple
Amazon requires US regulators to withdraw votes: bypassing the company's harassment of Bezos to disturb operations
Pet dog infecting monkey acne suspected "Human Poor" American CDC Reform Control Guide
Space Launch System to Fly for First Time
Tencent's second-quarter net profit fell 56% from a year earlier to 18.6 billion yuan
Fabless customers cut back on chip orders affecting Q4 capacity utilization
Washington's suspicion of TIKTOK exacerbated: How will the Bayeon government weigh it?
Pinduoduo launched its cross-border e-commerce platform in the United States in September
Put an SSD in your phone: from 2,499 yuan