Recently, some car bloggers have exposed a group of red flag N701 (N701 as code -named, official name to be announced).

Maybe a friend is more unfamiliar with this car, let's say that, 2019,Hongqi spent 570 million yuan to create a new flagship sedan on the basis of the existing L platform, internal code N701It is planned to assemble 50 N701 models in 10 years, and an average of 5 is assembled each year.

Therefore, its status must not be explained too much, just know that this car definitely represents the top standards made in China.

Back to the vehicle that was exposed this time, the red flag N701 was photographed is a standard wheelbase version.The front face follows the design language of the Hongqi familyWith a large -sized straight waterfall grille, it creates a dignified and atmospheric gas field, while the large -sized red flag logo is placed on the cabin cover to further indicate the identity of the model.

The side is very slender, and the engine compartment occupies a large proportion, and the back door should be significantly longer than the front door, which indicates that the car is extended to the rear row. The metal wheel with sunflower LOGO is full of the entire gas field, which is quite shocking.

The tail is full of layered sense. Two penetrating chrome trim effectively widen the visual width, and the taillights similar to the font -shaped shape are quite durable and exquisite.

Power information has not yet been announced,It is expected to be equipped with a V8 or V12 engineAfter all, from the engine compartment, these big guys are indeed installed. 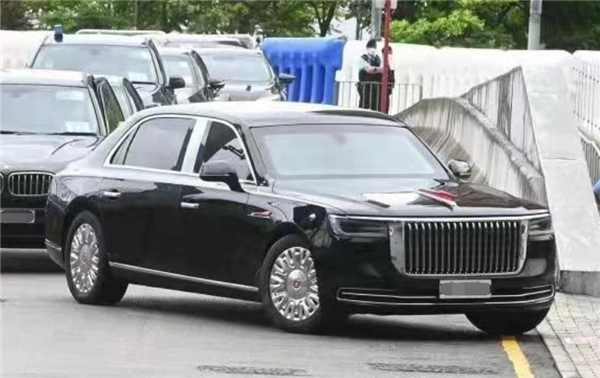 Related news
Semicon China: Huawei and Exxon bring semiconductor intelligent quality inspection and measurement solutions
Glory high-tech products help team China's national team set out to show China's business card to the world
China Cracks Down on Cosmetic Medicine Advertising
Popular Hot Pot Restaurant Brand Haidilao to Shut Down 300 Restaurants in China
China’s First Desktop Operating System Developer Platform openKylin Launched
China's top manufacturing standards! Hongqi N701 real car debut: only 5 annual output
Telecom Operators Essential for the Metaverse:China Mobile Chairman
Tesla China First Shatters Delivery Record in Six Months amid Covid's Fading
Hot news this week
China has found 35 known cases of the new zoonotic virus Langya
Losses in a single quarter of $ 23.4 billion a record, SoftBank did not carry the plunge of technology stocks and the devaluation of the yen
The prevention and control of the American Monkey epidemic has failed. What should I pay attention to?
Is the micro -business headache? WeChat friends are suspected to have a big move: 7 can only be posted a week
Kuaishou launched a self-developed cloud intelligent video processing chip: The chip has been streamed successfully
The new product of Xiaomi MIX is coming: both internal and external dual -screen has been upgraded to make up for the previous generation.
A new zoonotic virus, Langya, found in China has not yet been confirmed to be transmitted from person to person
Ministry of Public Security: Single telecommunications network fraud continues to cause 40 % of all electrical fraud cases
Special price "kill ripe"? Bike-sharing platforms have different prices for the same package for different users
A tech company in Shanghai has been fined 220,000 yuan for swiping orders to improve its ranking on Yelp
The most popular news this week
Xiaomi's 500 -day industry insider: There is no surprise of autonomous driving technology
Your mobile phone is more and more "understand" you? This is not necessarily a good thing
Economic Daily: Putting less traffic and fake crooked ideas
Hubble discovered "Celestial Cloud Scenery": like a beautiful abstract watercolor painting
US media: YouTube plans to launch a streaming media video service subscription platform.
Microsoft calls Sony's game "exclusive" hindering the development of XGP, and the subscription system has not yet brought color to the two businesses
Domestic 1.5K screen+Snapdragon 888 4G Huawei Mate 50 Standard Edition Stealing
Huawei gave high -end mobile phones to Apple's delivery in 2022 about 30 million units
Intel is ok! AMD CPU discovered a new security vulnerability: Ryzen family was stabbed
Samsung high -level: By 2025 Samsung's high -end mobile phones are half a folding screen phone