Reworking the "Apple Tax" Meta in the metasverse was roundly criticized

In the past, Meta, the parent company of Facebook, has repeatedly criticized the "Apple tax," which is as high as 30 percent.

Meta recently announced that it will be testing a new set of tools on its Horizon Worlds meta-universe platform that will allow some creators to profit from selling digital assets on the platform.

However, Meta will take a high percentage of the creators' income. For WEB and mobile users, Meta takes a 25% commission. Meta takes a whopping 47.5% commission for users who enter through OculusVR headsets.

This not only caused the developer's anger, but also attracted the "ridicule" of competitors.

Apple: Zuckerberg is so hypocritical

Several VR app developers told the press that they were frustrated with Meta, which was seen as an early leader in a metasurverse platform, for insisting on a charging model for its VR app store similar to that found on smartphones today.

"Don't confuse marketing with reality, Meta picking on Apple is marketing, but that doesn't mean Meta won't do exactly the same thing."

"Meta has repeatedly argued that The 30% commission Apple charges developers for in-app purchases on the App Store is too high. Now, Meta is trying to charge these developers a lot more than other platforms,Meta's announcement exposes Meta's hypocrisy.”

Apple added: "This shows that while Meta seeks to use Apple's platform for free, they are happy to generate revenue from creators and small businesses using their platform."

Meta's VR/AR technology lead and CTO Andrew Bosworth, also known as Boz, responded with a series of tweets on Thursday.

Boz also criticized Apple, saying that while the Oculus app Store and iOS store both take a 30% commission, Meta heavily subsidized Quest devices to make the hardware available to more people, while Apple makes a lot of money from the hardware and benefits from the software. Boz says Meta's approach has led developers to see success on the QuestStore -- more than 120 games have generated over $1 million in revenue. 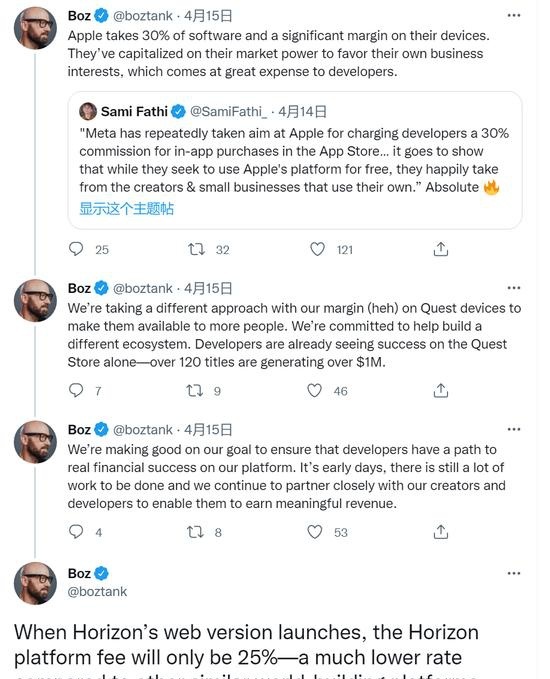 But Lyron Bentovim, chief executive of Glimpse Group, an immersive experience Group, was critical of the Quest store. "Buying stuff at Quest is a pain, much worse than buying it on An Apple or Android store," he said.

Related news
Why do I suggest you switch to Apple Music
Apple Watch? Meta's first smartwatch is exposed, photographed and detachable
Heading into the metasemes, the Facebook Oculus was renamed Meta Quest
Meta lost $200 billion in market value in a single day
Meta's market capitalization lagged behind NVIDIA for the first time, ranking 8th among the most valuable companies in the United States
Meta was sued for Apple's privacy tweaks: withholding $10 billion in advertising losses
Meta indicted: Investors were not warned of the risks posed by Apple's privacy adjustments
Meta score 47.5% to "Yuan Universe" developers more than Apple 30%
Technology giants such as Meta and Microsoft formed the Yuanshi Standard Organization: Apple is absent
Reworking the "Apple Tax" Meta in the metasverse was roundly criticized
Hot news this week
China has found 35 known cases of the new zoonotic virus Langya
Monkey acne cases have ranked first in the world that the United States has announced the emergency state of public health
Credit card points rule intensive adjustment online transaction points more "valuable"
Losses in a single quarter of $ 23.4 billion a record, SoftBank did not carry the plunge of technology stocks and the devaluation of the yen
The prevention and control of the American Monkey epidemic has failed. What should I pay attention to?
Sources say Samsung's Galaxy Z Fold4 is going up in price: a 512GB top unit will cost more than 13,000
Is the micro -business headache? WeChat friends are suspected to have a big move: 7 can only be posted a week
Kuaishou launched a self-developed cloud intelligent video processing chip: The chip has been streamed successfully
The new product of Xiaomi MIX is coming: both internal and external dual -screen has been upgraded to make up for the previous generation.
A new zoonotic virus, Langya, found in China has not yet been confirmed to be transmitted from person to person
The most popular news this week
Mr. Lei: Mr. Bezos apologized to me for not taking good care of Joyo.com
Ever wanted to buy Tencent QQ, Alibaba asked for a stake? Lei jun rumours
Lei Jun's first business thinking book "Xiaomi Entrepreneurship Thinking" was introduced to the latest and most complete Xiaomi methodology summary
Apple's iPhone is no longer a symbol of wealth in China: for reasons to be proud
Xiaomi Motor Autonomous Driving First Show: Automatic Charging of Autonomous Driving in the whole scene
Musk's eyes! Lei Jun released a full -size humanoid robot Xiaomi self -developed strength explosion table
The global streaming media have increased the animation circuit is becoming a new "breakthrough" for Youaiteng
Kuaishou TOB business Yu Bing: Self -developed chips or mass production after the end of the year, the video must be turned into light industry
Lei Jun: Once bid 10 million to buy NetEase was rejected by Ding Lei
Intel burns 23.2 billion won't make a decent graphics card