Microsoft has agreed to lease the battery packs that power its Dublin data centre to the Irish government. These huge lithium-ion battery packs will help stabilize the use of electricity generated by Ireland's wind farms. 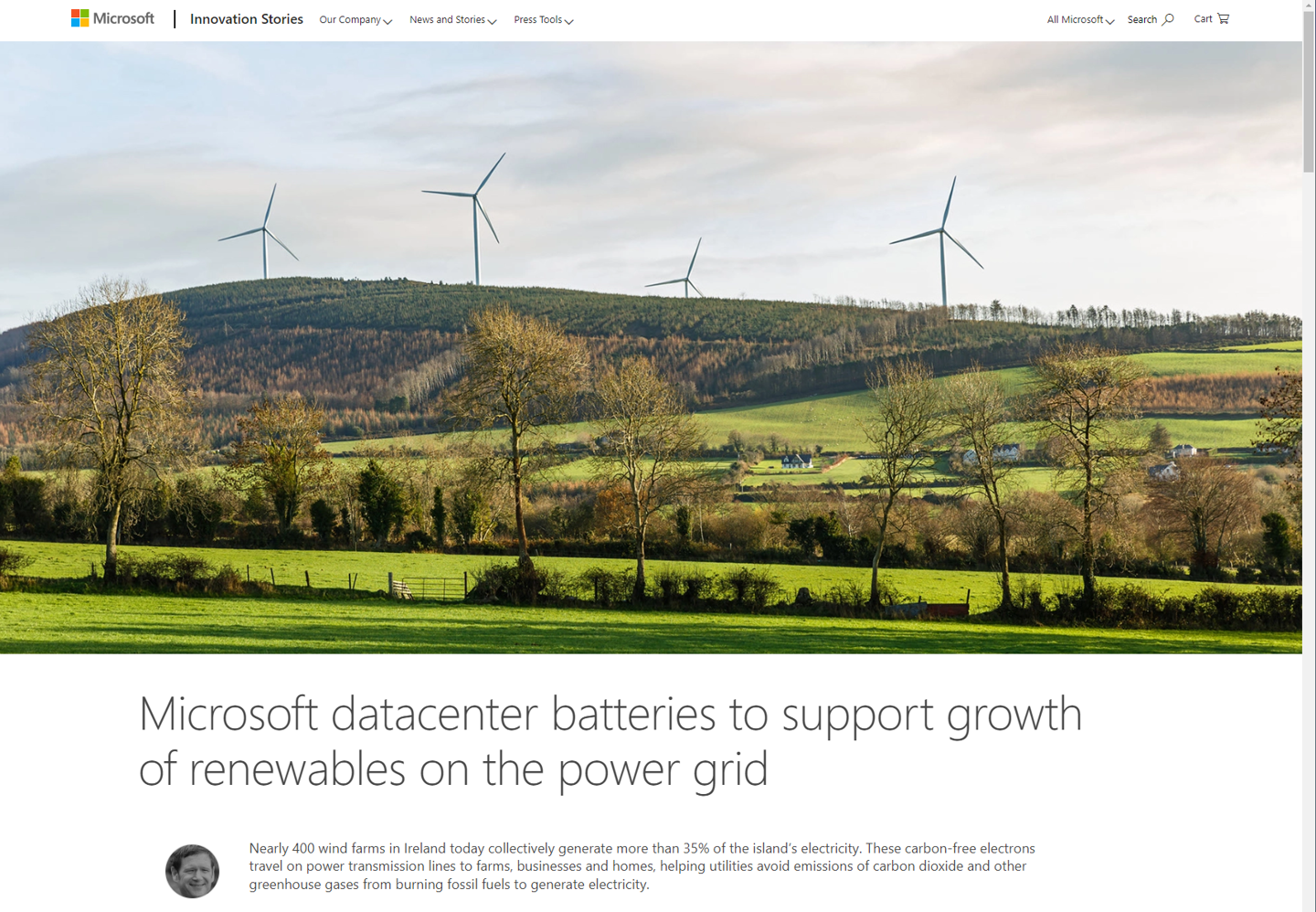 Ireland has about 400 wind farms that together generate more than 35 percent of the island's electricity. Although winds provide clean energy, they do present challenges for power generation and distribution companies. The strength of the wind fluctuates throughout the day or season, resulting in considerable variations in power generation.

Every grid operator that relies on fossil fuels such as coal or natural gas must maintain so-called rotating reserves. This excess capacity helps power distribution companies respond quickly to changes in demand.

In Ireland, Microsoft's data centre batteries, which consist mainly of large lithium ion batteries, will provide these services to help reduce the need to maintain rotating reserves at power plants. Microsoft commissioned a study to analyse the potential impact of the technology. By 2025, Microsoft's batteries could save 2 million tons of carbon dioxide from being released into the atmosphere, the study said.

Data centers must operate with very high reliability, with some claiming 99.999% uptime. To do this, data center operators rely in part on batteries in UPS (uninterruptible power supplies). Needless to say, UPS needs to be on at all times. Microsoft has partnered with Eaton, an intelligent power management company, to develop and test an interactive UPS for the grid. Together, the two companies have successfully used UPS, a data centre, for a large grid that accepts electricity from renewable sources.

Almost every grid operator in the world is exploring renewable energy. However, securing a stable power input and providing reliable supply are two key challenges. The giant battery pack acts as an intermediary. Microsoft's contribution can help the Irish government effectively balance supply and demand while continuing to generate more electricity from green and renewable sources.

As countries build up their renewable energy production, they will need bigger battery packs. In addition to helping the world go green, Microsoft may well be exploring another source of revenue.

Related news
Microsoft To-Do officially landed on macOS platform (figure)
German school bans Microsoft Office 365: due to privacy concerns, illegal use
Microsoft edge has more privacy violating telemetry than other browsers
Microsoft is leasing huge data-centre batteries to Ireland to help with load balancing in wind power
Hot news this week
Biden signed a chip and scientific bill, a video call of WeChat iOS internal test suspension window, the advanced CPU caused Win11 to be difficult to use, Huawei new machines enter...
How to regulate the "broken card" operation to crack down on electrical fraud to prevent "accidental injuries" with cards?
Musk's eyes! Lei Jun released a full -size humanoid robot Xiaomi self -developed strength explosion table
Japan has confirmed that China has overtaken the US for the first time in the world's top three indicators of scientific papers
iPad 10 will be absent from iPhone 14 conference: October appeared on Apple's last non -comprehensive tablet tablet!
Kuaishou TOB business Yu Bing: Self -developed chips or mass production after the end of the year, the video must be turned into light industry
The three major indexes of the US stocks opened sharply: ROBLOX fell more than 4%, Twitter and Tesla rose more than 3%
The global streaming media have increased the animation circuit is becoming a new "breakthrough" for Youaiteng
After selling Tesla for $6.9 billion, Musk said he was not selling it, but a survey said he was still selling it. The title of the world's richest man may not be guaranteed next ye...
Meizu Pandaer Great: All products are reduced by 200 and 30 -containing mobile phone cases, heat dissipation back clamps
The most popular news this week
Pet dog infecting monkey acne suspected "Human Poor" American CDC Reform Control Guide
Space Launch System to Fly for First Time
Tencent's second-quarter net profit fell 56% from a year earlier to 18.6 billion yuan
Fabless customers cut back on chip orders affecting Q4 capacity utilization
Washington's suspicion of TIKTOK exacerbated: How will the Bayeon government weigh it?
Pinduoduo launched its cross-border e-commerce platform in the United States in September
Put an SSD in your phone: from 2,499 yuan
China's largest general purpose drone! The first five flights were successful
IPhone 14 to be released alongside Huawei Mate 50: Which bangs do you choose?
Tencent's agent of the Russian war online game announced the suspension: Customs Customs in October