Wechat chat records have to be deleted or they will be blocked? Fake! But doing such things can lead to a permanent ban

Recently, Shanghai rumor refuting platform background received a number of netizens consultation, asking whether there is "wechat chat records to delete all, otherwise will be sealed group seal number", "the country began a new round of inspection, not only sealed group, group master number, group member number together, never thaw" and so on. After verification, the above are false news, there is no "do not delete chat records will be blocked", "a new round of clearance" and other situations.

However, it should be noted that the Regulations on the Use of wechat Personal Accounts, the Network Security Law of the People's Republic of China and the Regulations on the Management of Internet Group Information Services are clear that all Internet platform users, including wechat users, are responsible for maintaining a civilized and orderly network group space. Internet platforms, including wechat, and relevant departments will take relevant management measures, including permanent closure, for violations of relevant regulations, laws and regulations.

Network transmission "check wechat group" and other information is not real

Shanghai rumor refuting platform found that the recent network spread of "wechat check" news there are mistakes, words and other problems. For example, there are rumors that "there will be another round of blanket closures starting at 8 p.m. tonight across the country." They don't know what they're talking about. Wechat and others also said there was no such action. 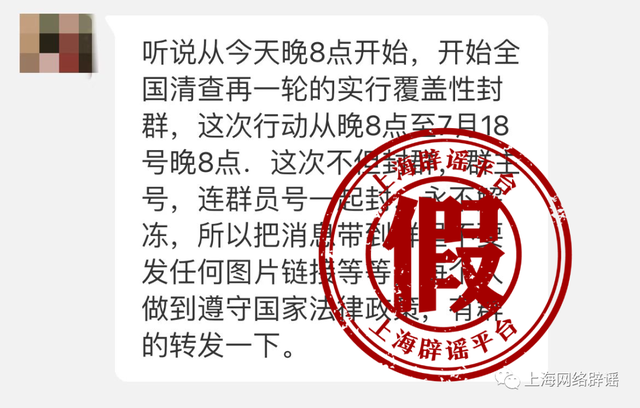 However, netizens must not "do whatever they want" on social media platforms such as wechat. Internet platforms including wechat have corresponding management regulations; At the national level, there are also laws and regulations such as the Cyber Security Law of the People's Republic of China and regulations on the Management of Internet Group Information Services, which clearly advocate honest and trustworthy, healthy and civilized online behavior.

It is pointed out in the above laws and regulations as well as the rules on the use of Internet platforms that if netizens violate the relevant regulations, corresponding measures will be taken, including the closure of accounts and groups.

What is the possible cause of closure, closure group? The Shanghai Refuting platform has combed out relevant regulations, laws and regulations.

In view of these illegal content, "wechat Personal Account Usage Standards" clearly: "Once found, Tencent will delete or block the illegal information, warning, limit or prohibit the use of part or all functions until permanent closure according to the circumstances, and has the right to announce the results of treatment"; In case of any violation in a wechat group, "Tencent will delete or block the violation information, warn, restrict or prohibit the use of some or all functions or even permanently block the wechat group and the founder, manager and perpetrator of the violation according to the circumstances, and have the right to announce the result of the punishment".

The Cyber Security Law of the People's Republic of China points out: No individual or organization to use the Internet should abide by the constitution law, observe public order and respect social morality, shall not endanger the network security, may not use the network to endanger national security, honor and interests, incitement to subvert state power and overthrow the socialist system, incitement to split the country and undermine national unity, promoting terrorism, extremism and promote ethnic hatred, ethnic discrimination, The dissemination of violent and pornographic information, the fabrication and dissemination of false information to disrupt economic and social order, and the infringement of others' reputation, privacy, intellectual property rights and other legitimate rights and interests.

Among them, Internet group information service providers (such as wechat, QQ, Weibo and other platforms) should take warning and rectification measures, suspension of publication, closure of groups and other measures in accordance with the law for Internet groups that violate laws and regulations and relevant national regulations. For group founders, managers and other users who violate laws and regulations and relevant state regulations, management measures such as lowering credit rating, suspending management authority and canceling group building qualification shall be taken according to the contract; Blacklist the founders, managers and members of groups with serious violation of laws and regulations, and restrict group service functions.

On April 8 this year, the Shanghai Cyberspace Administration issued a notice on Further Investigation and Punishment of rumour-mongering in online circles. It also pointed out that it would cooperate with public security departments and other departments to track down rumor-makers and those who deliberately spread rumors and punish them according to law. Since April, the cyberspace authorities have dealt with groups that maliciously spread rumors in accordance with the law, including shutting down some groups.

Related news
Fake bitcoin transactions.
The overseas version of enterprise wechat has been renamed from wechat work to wecom
Tencent: existing wechat users in the U.S. may continue to use but cannot obtain new users, and will continue to negotiate
Change name to avoid ban? Tencent: wecom and wechat are different products
Has soared to 54,000 Wechat and downloads surged in the U.S. over the weekend
DO U ALWAYS GET MONEY BUT WONDER HOW IT VANISHES CALL ON +27
BUY SUPER HIGH QUALITY FAKE MONEY,CLONE CREDIT CARD ONLINE.
Hot news this week
Too many questions! Apple has changed the timing of the official release of iOS 16 series
Monkey acne cases have ranked first in the world that the United States has announced the emergency state of public health
Credit card points rule intensive adjustment online transaction points more "valuable"
High reserves and low cost experts: calcium ion batteries replace lithium batteries to stand up to the daily
Alibaba executives interpret financial results: the focus of the consumer side is no longer to attract new, but to do a good job in stratified operation
Losses in a single quarter of $ 23.4 billion a record, SoftBank did not carry the plunge of technology stocks and the devaluation of the yen
Sources say Samsung's Galaxy Z Fold4 is going up in price: a 512GB top unit will cost more than 13,000
The prevention and control of the American Monkey epidemic has failed. What should I pay attention to?
Is the micro -business headache? WeChat friends are suspected to have a big move: 7 can only be posted a week
The new product of Xiaomi MIX is coming: both internal and external dual -screen has been upgraded to make up for the previous generation.
The most popular news this week
AMD Zen4 has a "sweet spot" : The first wave of DDR5 is cannon fodder!
Xiaomi new flagship is issued tonight: the cost of light screen is the top of a Snapdragon 8+ flagship
Huawei Mate 50 September IP14! Multi -device collaborative crushing apples
After selling Tesla for $6.9 billion, Musk said he was not selling it, but a survey said he was still selling it. The title of the world's richest man may not be guaranteed next ye...
Distributed database OceanBase announced 4.0 product release, single -machine deployment performance is super mysql
The three major indexes of the US stocks opened sharply: ROBLOX fell more than 4%, Twitter and Tesla rose more than 3%
Japan has confirmed that China has overtaken the US for the first time in the world's top three indicators of scientific papers
A wake-up call for Apple? Foxconn says it is feeling the sting of slowing demand for smartphones
Joining Chip Alliance could serve as bridge, says South Korean Foreign Minister
Joe Biden also mentioned Chiplet? An unexpected A-share buzzword in A White House briefing