Original Title: Microsoft admits that there is a problem with the beginning of the menu of the win11

IT House on July 23rd. Earlier this time, Microsoft issued an announcement on the issue that caused the start menu on some Windows 11 PC. Affected. 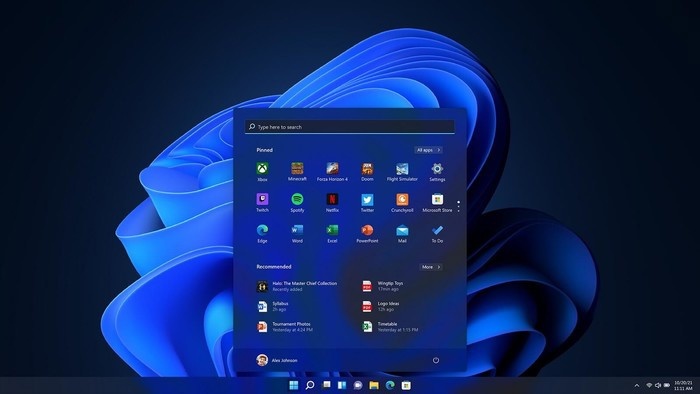 After installing the KB5014668 update (internal version 22000.778) or a higher version, we received a report saying that a few devices may not be able to open the start menu. On the affected device, click or select the start button, or use the Windows button on the keyboard to be invalid. 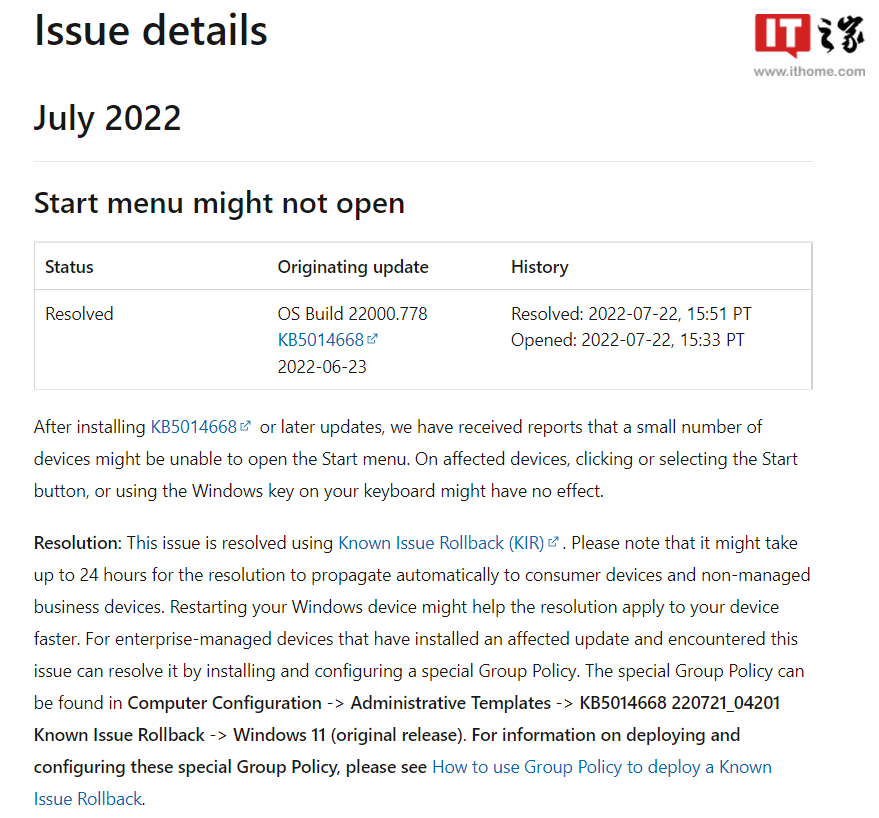 The solution may take up to 24 hours to automatically spread to consumer equipment and non -custody business equipment, and restart Windows device may help the solution to apply to the device faster.

For enterprise management equipment that has been installed and updated and encountered this problem, you can solve this problem by installing and configured special group strategies (click here to download). Special group strategies can be found in the computer configuration -& gt; management template -& gt; kb5014668 220721_04201 Known -& gt; Windows 11 (Original Release).

It is worth mentioning that the KB5014668 patch has also had problems before. The patch fixes the problem that preventing Windows 10 users from upgrading to Windows 11 (initial version). However, according to the content of the Microsoft Windows feedback center, the patch itself seems I also encountered installation problems.

Related news
NVIDIA and Intel release win11 driver! Win11 game features exposed
New generation game artifact talk about win11 game features
Win11 new features at a glance! Taken on a new look
Is the card slow after upgrading Win11? Win11 has performance issues: Teach you to fix them
Win11 big bug many: Microsoft said
The latest version of Win11 is online: update content inventory
The 2022 Win11 update has not yet reached the 2023 Win11 news
Microsoft personally supports Win11: the company's 190,000 workstation upgrades without problems
There's no latest version of Win11 this week: Microsoft Programmer Dove!
Microsoft has now sold the win11 license to DIY users
Hot news this week
Biden signed a chip and scientific bill, a video call of WeChat iOS internal test suspension window, the advanced CPU caused Win11 to be difficult to use, Huawei new machines enter...
How to regulate the "broken card" operation to crack down on electrical fraud to prevent "accidental injuries" with cards?
Musk's eyes! Lei Jun released a full -size humanoid robot Xiaomi self -developed strength explosion table
Japan has confirmed that China has overtaken the US for the first time in the world's top three indicators of scientific papers
iPad 10 will be absent from iPhone 14 conference: October appeared on Apple's last non -comprehensive tablet tablet!
Kuaishou TOB business Yu Bing: Self -developed chips or mass production after the end of the year, the video must be turned into light industry
The three major indexes of the US stocks opened sharply: ROBLOX fell more than 4%, Twitter and Tesla rose more than 3%
The global streaming media have increased the animation circuit is becoming a new "breakthrough" for Youaiteng
After selling Tesla for $6.9 billion, Musk said he was not selling it, but a survey said he was still selling it. The title of the world's richest man may not be guaranteed next ye...
Meizu Pandaer Great: All products are reduced by 200 and 30 -containing mobile phone cases, heat dissipation back clamps
The most popular news this week
Pet dog infecting monkey acne suspected "Human Poor" American CDC Reform Control Guide
Space Launch System to Fly for First Time
Tencent's second-quarter net profit fell 56% from a year earlier to 18.6 billion yuan
Fabless customers cut back on chip orders affecting Q4 capacity utilization
Washington's suspicion of TIKTOK exacerbated: How will the Bayeon government weigh it?
Pinduoduo launched its cross-border e-commerce platform in the United States in September
Put an SSD in your phone: from 2,499 yuan
China's largest general purpose drone! The first five flights were successful
IPhone 14 to be released alongside Huawei Mate 50: Which bangs do you choose?
Tencent's agent of the Russian war online game announced the suspension: Customs Customs in October