Tencent's web3 dream, it will be shattered in less than a year?

Digital collections ushered in the first shuffling for less than half a year in China.

According to the "Interface", Tencent is planning to dismiss the "magic nuclear" business this week. Tencent Phantom nucleus is a digital collection platform under Tencent. It was launched in August 2021 and has not been full for one year. The magic nucleus belongs to Tencent PCG and is the innovative business of the department.

According to the "Huaxia Times", the phantom nucleus told reporters: We have not received relevant notices, and currently operate everything as usual. At present, the new version of the APP and upgrade the old collection experience, the release of new collections will be postponed. However, the phantom nuclear has not denied whether the magic nuclear will be dismissed, and it has not told reporters that the news is "rumor."

Even though Tencent really abolished the "magic nuclear" business, it did not mean that Tencent completely abandoned the blockchain.The industry speculates that at least the "fantasy nuclear" chain will still operate normally. Based on Tencent Cloud, the Based on Tencent Cloud is a blockchain platform jointly constructed by Tencent, China Net Security, and Maple Tune. The home unit provides blockchain services.

The domestic NFT boom originated in June 2021. At that time, the Alipay and Dunhuang Fine Arts Research Institute released two NFT skin, and the price was once fired to more than 10 million. 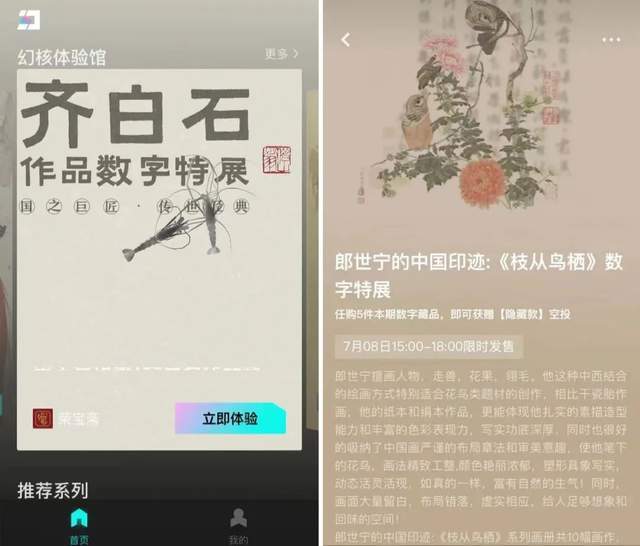 However, since April and May, market sentiment has shifted from a very excited state to pessimism. "It can be seen from everyone's chat that no one has bought it because it is no longer good at it."Huang Kai, the "Tibetan Ship", told Jike Park that "the number of new users coming in is declining, and when the number of platforms is increasing, we have clearly seen a trend. Many platforms cannot sell anymore. , Even the big manufacturer can't sell it anymore. "

According to the "Interface" report, at the beginning of the fantasy nucleus, the first batch of "Thirteen Invitational Vinyl Records NFT", which limited 300, was sold out in 1 second, but in the past month, multiple digital collections of fantasy nucleus have appeared. Surprise. A total of 20,245 pieces of "Master Hongyi's Calligraphy Calligraphy Screen Digital" issued on June 21, which were released on June 21, a total of 8206 were sold for a total of 8,206 series of "Shizhuzhai Painting Book" series released on June 17.

In February and March, the sales of the magic nucleus were very good, and it was sold out almost immediately. Many buyers think that even the products of unknown small platforms can make a lot of money, so the magic nucleus owned by large factories should be able to earn more. If the fantasy nuclear will open the secondary circulation market in the future, the phantom nuclear products you buy will add more.

However, the greater the fantasy of the big factory, the higher the risk. "The money that digital collection can make is nothing to Tencent. Because the regulatory policy is not clear, Tencent does not need to risk to open the secondary market." LUCY said that it started to do the digital collection solution platform last year.

With the advent of the overseas NFT market, it has also affected the domestic market. "Everyone feels that there is a risk of foam rupture, and the magic nucleus is firmly unavailable to set up a circulation platform. Phantom nuclear products have also become the first to be sold. She analyzed.

For Tencent, when digital collections cannot be sold, and the risks of the policy can open the secondary market to boost the market, and when the new business "has no way", this business that makes fast money is basically coming to an end.

02 The routine of "IQ Tax" is invalidated, and the second half begins

Why is digital collections extremely popular? Azawa, the manager of a digital collection platform, observed that 80% of the people who purchased digital collections in the early days came from the ox with a fried shoe ring, the Moutai circle, and the door -fried ticket circle. The picture, and they have a large user base in their hands. "These user bases are mainly post -95s, and men account for the vast majority of men.

soon, This attracted the attention of the black production. A member of a network security team told us that the appreciation space that was hyped at the beginning of the digital collection was monitored that the number of black yield intelligence began to explode around March this year.

The black production will monitor the major activities of the NFT release platform in real time, organize it into a table, share it in the group, and update every day. Then write the program for snap -up, and then sell it back. The whole process is profitable and illegal. The boom of black production further makes the hype of this field more crazy.

Many digital collections themselves are not worthy, and they lack competitiveness in their aesthetics. "The current digital collection is very unhealthy. Few people pay attention to whether it has artistic value. Do you really like or have collection value? Only consider whether you can make money."

Sun Quan found that some institutions will find a digital collection platform, or the platform will find them, discuss how to design each other, and disclose how to hype in advance.

Zhou Yu hit Huang Gai, willing to fight and be willing. Investors are lucky and think that they can make differences when they turn their hands. A unique Xu Beihong digital ink horse collection can be sold for 128 yuan, and it will be available in seconds. "Actually you buy a picture. There are few copyright products. To put it plainly, it is the IQ tax. It doesn't make much sense."

"The industry that rely on unhealthy speculation is definitely unable to last." Huang Kai felt, "People in the industry also hope or call on the country to retain the transfer of digital products as much as possible, while avoiding its financial melting and avoiding its hype.This depends on the country's policy. I am afraid that this market is now badly played by some small platforms. The country comes out of a one -size -fits -all policy, which directly seals the circulation. That will be a devastating blow for the industry. "

Related news
Wall Street elites "flocked" to Web3
Countless entrepreneurial companies into sacrifices to advocate the Web3 has not taken off
JD.com,Tencent Extend Strategic Partnership on AI
Tencent CSIG Creates Enterprise & Government Business Line
The excitement and calmness of the large-scale application of Web3.0 still need time to test
Tencent's Web3 dream, less than a year "burst"?
Tencent's web3 dream, it will be shattered in less than a year?
Hot news this week
Too many questions! Apple has changed the timing of the official release of iOS 16 series
Monkey acne cases have ranked first in the world that the United States has announced the emergency state of public health
Credit card points rule intensive adjustment online transaction points more "valuable"
High reserves and low cost experts: calcium ion batteries replace lithium batteries to stand up to the daily
Alibaba executives interpret financial results: the focus of the consumer side is no longer to attract new, but to do a good job in stratified operation
Losses in a single quarter of $ 23.4 billion a record, SoftBank did not carry the plunge of technology stocks and the devaluation of the yen
Sources say Samsung's Galaxy Z Fold4 is going up in price: a 512GB top unit will cost more than 13,000
The prevention and control of the American Monkey epidemic has failed. What should I pay attention to?
Is the micro -business headache? WeChat friends are suspected to have a big move: 7 can only be posted a week
The new product of Xiaomi MIX is coming: both internal and external dual -screen has been upgraded to make up for the previous generation.
The most popular news this week
AMD Zen4 has a "sweet spot" : The first wave of DDR5 is cannon fodder!
Xiaomi new flagship is issued tonight: the cost of light screen is the top of a Snapdragon 8+ flagship
Huawei Mate 50 September IP14! Multi -device collaborative crushing apples
After selling Tesla for $6.9 billion, Musk said he was not selling it, but a survey said he was still selling it. The title of the world's richest man may not be guaranteed next ye...
Distributed database OceanBase announced 4.0 product release, single -machine deployment performance is super mysql
The three major indexes of the US stocks opened sharply: ROBLOX fell more than 4%, Twitter and Tesla rose more than 3%
Japan has confirmed that China has overtaken the US for the first time in the world's top three indicators of scientific papers
A wake-up call for Apple? Foxconn says it is feeling the sting of slowing demand for smartphones
Joining Chip Alliance could serve as bridge, says South Korean Foreign Minister
Joe Biden also mentioned Chiplet? An unexpected A-share buzzword in A White House briefing