Bill Gates, who owns more farmland than New York City and tells Americans not to eat meat, is questioned by lawmakers.

Bill Gates, the former richest man in the US, has become the largest private owner of farmland in the country this year, but his motives for buying so much farmland have recently been questioned, according to Thepaper.cn.

South Dakota Congressman Dusty Johnson has demanded that Bill Gates explain why he bought large amounts of farmland in the US while telling Americans not to eat meat.

Dusty Johnson, 45, is a member of the House Committee on Agriculture, a South Dakota Republican who is considered a leader on issues related to rural America, Agriculture, livestock and welfare reform. Mr Johnson told Fox News in the US that Bill Gates was buying up farmland in order to artificially inflate the price of red meat. Gates' goal is to make beef prohibitively expensive, forcing people to eat artificial meat in the near future. 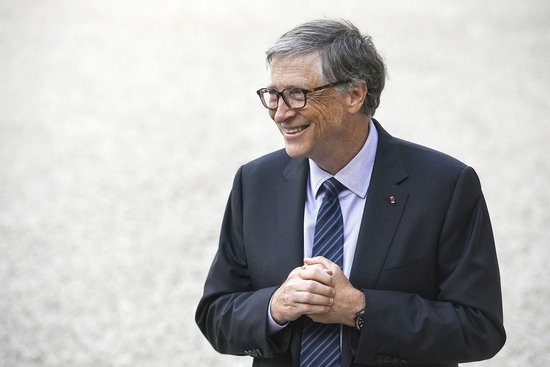 Microsoft founder Bill Gates has won approval from the North Dakota Attorney General's office to buy 2,100 acres of farmland in the state worth $13.5 million, The Business Daily previously reported. Bill Gates' purchase of farmland has sparked complaints from local residents and farmers and led to the intervention of the state's top prosecutor.

The National Business Daily noted that this is not the first time Gates has invested in land in the US. He has already purchased nearly 270,000 acres (about 1,100 square kilometers) of land in 19 states. However, this is only 1% of the total agricultural land in the US, and Gates is now the largest private farmland owner in the US.

The purchases include Louisiana, Arkansas, Nebraska, Arizona, Mississippi, Indiana, Washington and the southern states of Florida, according to the report. The land, spread across 19 states, includes farmland for vegetables such as carrots, soybeans and potatoes, NBC reported. In Washington state, for example, Gates owns more than 14,000 acres of farmland, including huge fields of potatoes that can be seen from space, some of which he supplies to McDonald's.

When the North Dakota land purchase was approved, Gates' land holdings expanded again. According to data released by the 2021 Land Report 100, Gates has acquired farmland across more than a dozen states over the past few years, including 242,000 acres of farmland, 1,234 acres of recreational land and 25,750 acres of other land in transition from farmland to residential and commercial use. The North Dakota purchase will bring its total land holdings to more than 270,000 acres, an area the size of three Berlins. 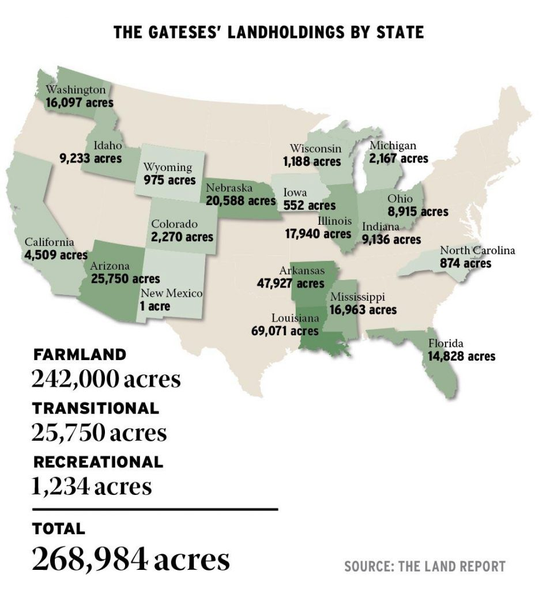 Data show that more than 97 percent of American farms are now owned by families, with the remainder owned by corporations. Today, Gates is not only the fourth-richest person in the world, he is also the largest private farmland owner in the United States, according to the Land Report 100.

But since the 2021 report showed that Mr. Gates had begun buying land, a growing number of farmers have expressed unease in blog posts and on social media. Gates later responded on Reddit, saying, "Agriculture is important to us. With more high-yielding seeds, we can avoid deforestation and we can help Africa deal with the climate problems that they have been facing for years."

Amazon founder Jeff Bezos also owns 420,000 acres (about 1,700 square kilometers) of land. In addition to farmland, Bezos also has a lot of forest and uncultivated land. Us media magnate Ted Turner and US businessman Thomas Peterffy, ranked 65th on the 2021 Forbes List of the world's richest people with a fortune of $25 billion, are among the top landowners in the US.

According to the U.S. Department of Agriculture, 39 percent of landowners do not farm their own land but lease it to farmers. Eighty percent of those who do not farm are investors. Obviously, the cash flow from rent is a significant direct income for many investment in agricultural land. Second, as farmland, crop yields are also one of the main returns, especially for the farmers who actually farm the land. Some people buy agricultural land as a relatively stable value-added investment, while it is used as a place for vacation and leisure. Some people use their farms as a place to celebrate weddings, birthdays and other celebrations.

Related news
Re-unite Lost Lovers in New York spells that work instantly
NVIDIA chief scientist bill dally will deliver a keynote speech on the first day of GTC China online conference
+27788889342 NEW YORK BRING BACK LOST LOVE SPELL CASTER IN U
Brazilian carrier TIM signed a memorandum of cooperation with Huawei to build Brazil's first 5G City
Shenzhen Passes Law to Allow Autonomous Cars on City Roads
Bill Gates, who owns more farmland than New York City and tells Americans not to eat meat, is questioned by lawmakers.
Hot news this week
Monkey acne cases have ranked first in the world that the United States has announced the emergency state of public health
Credit card points rule intensive adjustment online transaction points more "valuable"
High reserves and low cost experts: calcium ion batteries replace lithium batteries to stand up to the daily
Alibaba executives interpret financial results: the focus of the consumer side is no longer to attract new, but to do a good job in stratified operation
Losses in a single quarter of $ 23.4 billion a record, SoftBank did not carry the plunge of technology stocks and the devaluation of the yen
The prevention and control of the American Monkey epidemic has failed. What should I pay attention to?
Sources say Samsung's Galaxy Z Fold4 is going up in price: a 512GB top unit will cost more than 13,000
Is the micro -business headache? WeChat friends are suspected to have a big move: 7 can only be posted a week
The new product of Xiaomi MIX is coming: both internal and external dual -screen has been upgraded to make up for the previous generation.
Alibaba's first quarter revenue in the first quarter of fiscal year 2023 was 205.56 billion yuan in net profit of 30.25 billion yuan
The most popular news this week
China Unicom chairman: 5G meals are cheaper than takeout in a single month
The market has voted no to the Chip bill
A net celebrity price of 500,000 yuan to sell its own WeChat court: No!
AMD Zen4 has a "sweet spot" : The first wave of DDR5 is cannon fodder!
Xiaomi new flagship is issued tonight: the cost of light screen is the top of a Snapdragon 8+ flagship
Huawei Mate 50 September IP14! Multi -device collaborative crushing apples
After selling Tesla for $6.9 billion, Musk said he was not selling it, but a survey said he was still selling it. The title of the world's richest man may not be guaranteed next ye...
Distributed database OceanBase announced 4.0 product release, single -machine deployment performance is super mysql
The three major indexes of the US stocks opened sharply: ROBLOX fell more than 4%, Twitter and Tesla rose more than 3%
Japan has confirmed that China has overtaken the US for the first time in the world's top three indicators of scientific papers