Bitcoin fell below $21,000 after an SEC investigation into Coinbase, the largest U.S. cryptocurrency exchange

On July 26, Bloomberg reported that Coinbase (COIN, $67.07, $14.891 billion market cap), the largest cryptocurrency trading platform in the United States, is facing an investigation by the Securities and Exchange Commission (SEC), according to three people familiar with the matter. 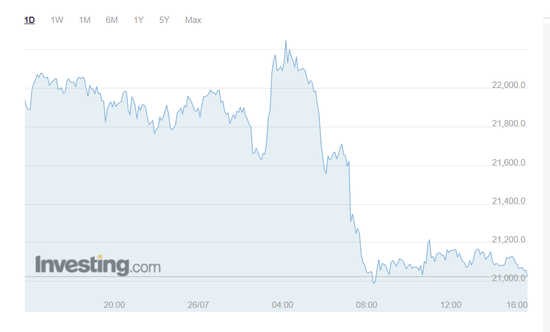 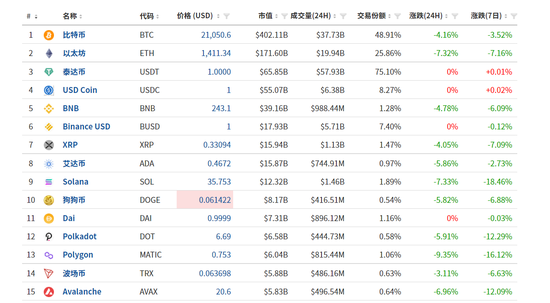 The SEC is focusing on whether Coinbase improperly let Americans trade digital assets that should have been registered as securities, the report said. That said, some of the digital tokens being traded on Coinbase's platform may be considered securities by the SEC.

"We are confident in the SEC's rigorous investigative process, that the SEC will exclude securities from our platform, and we look forward to engaging with the SEC on this matter." Paul Grewal, Coinbase's chief legal officer, said on Twitter. The SEC declined to comment on the matter.

Calls are growing for US regulators to do more to regulate cryptocurrencies as digital currencies have plummeted from record highs, wiping hundreds of billions of dollars off the crypto market's market value, reports say. SEC Chairman Gary Gensler has taken a look at cryptocurrency trading platforms and believes they should do more to protect retail investors.

The debate over whether cryptocurrencies should be registered as securities has been at the heart of a "tit-for-tat" between cryptocurrency platforms and US regulators for some time. SEC Chairman Gensler has long argued that many cryptocurrencies fall under the purview of regulators and that companies offering them should register with the SEC. However, the SEC is not currently specifying which crypto tokens are securities.

The National Business Daily reporter learned that Coinbase, as the largest cryptocurrency trading platform in the US, allows people to trade more than 150 tokens on its platform. If these token products are considered securities, the company may need to register with the SEC as a stock exchange.

Coinbase has repeatedly clashed with the SEC over how it regulates the industry. Coinbase, while adding its token offerings, has called on the SEC to propose clearer regulatory rules.

Bloomberg reported that SEC regulatory scrutiny of Coinbase has increased since it expanded the number of digital tokens it offers.

The move comes after tensions escalated on July 21 when the SEC charged a former Coinbase employee with violating insider trading rules. While the SEC didn't accuse Coinbase of wrongdoing at the time, it said it had determined that nine of the dozens of digital tokens traded were securities.

The two probes address the same issue: the SEC considers some cryptocurrencies offered by Coinbase to be securities, which Coinbase denies.

In response, Coinbase published a post titled "Coinbase Does not List Securities. End of Story." The article noted that both the Justice Department and the SEC reviewed the company's assets, but the DOJ did not file securities fraud charges. It added that Coinbase analyzes whether an asset can be considered a security before listing a token and "takes into account the regulatory compliance and information security of the asset."

Related news
Firefox Day vulnerability was used to attack Coinbase employees
Intel is involved in cryptocurrency! Purchase the first coinbase stock of encryption: amount exposure
The risk of delisting of Chinese stocks has hit Hong Kong stocks hard, explain what the SEC will do next?
Weibo was included in the "pre-delisting list" by the SEC, the first Chinese Internet company
Tesla has lost nearly $600 million after the richest Chinese lost 89% of his net worth in the bitcoin crash
Bitcoin fell below $21,000 after an SEC investigation into Coinbase, the largest U.S. cryptocurrency exchange
Hot news this week
China has found 35 known cases of the new zoonotic virus Langya
Monkey acne cases have ranked first in the world that the United States has announced the emergency state of public health
Credit card points rule intensive adjustment online transaction points more "valuable"
Losses in a single quarter of $ 23.4 billion a record, SoftBank did not carry the plunge of technology stocks and the devaluation of the yen
The prevention and control of the American Monkey epidemic has failed. What should I pay attention to?
Sources say Samsung's Galaxy Z Fold4 is going up in price: a 512GB top unit will cost more than 13,000
Is the micro -business headache? WeChat friends are suspected to have a big move: 7 can only be posted a week
Kuaishou launched a self-developed cloud intelligent video processing chip: The chip has been streamed successfully
The new product of Xiaomi MIX is coming: both internal and external dual -screen has been upgraded to make up for the previous generation.
A new zoonotic virus, Langya, found in China has not yet been confirmed to be transmitted from person to person
The most popular news this week
Mr. Lei: Mr. Bezos apologized to me for not taking good care of Joyo.com
Ever wanted to buy Tencent QQ, Alibaba asked for a stake? Lei jun rumours
Lei Jun's first business thinking book "Xiaomi Entrepreneurship Thinking" was introduced to the latest and most complete Xiaomi methodology summary
Apple's iPhone is no longer a symbol of wealth in China: for reasons to be proud
Xiaomi Motor Autonomous Driving First Show: Automatic Charging of Autonomous Driving in the whole scene
Musk's eyes! Lei Jun released a full -size humanoid robot Xiaomi self -developed strength explosion table
The global streaming media have increased the animation circuit is becoming a new "breakthrough" for Youaiteng
Kuaishou TOB business Yu Bing: Self -developed chips or mass production after the end of the year, the video must be turned into light industry
Lei Jun: Once bid 10 million to buy NetEase was rejected by Ding Lei
Intel burns 23.2 billion won't make a decent graphics card