Affected by the spread of the global new crown epidemic, the situation of Ukraine, and the high global inflation, the demand for consumer electronics was further weakened, and the sound of "chip cutting a single tide" was endless.

According to data from China Xintong Institute, from January to May this year, the overall shipments in the domestic mobile phone market were 108 million units, a year-on-year decrease of 27.1%; the latest report of IDC stated that the global traditional PC shipments in the second quarter of 2022 decreased by 15.3%year-on-year In order to decline in the second quarter of consecutive quarters. In addition, the Gartner report shows that global smartphone sales are expected to fall by 7.1%in 2022, while global PC shipments will decrease by 9.5%.

The consumer electronic chip design manufacturer is the first to spread under the "Single Tide". It has begun to spread to the wafer foundry link, but the MCU chip and other car regulations are still popular. Guotai Jun Anyan said that the prosperity of the semiconductor industry may have been seen, and it is expected to be maintained in the future.

Cut the status quo: two days of ice and fire

According to media reports, the supply chain has recently received Samsung notifications. The procedures for the suspension of purchasing until the end of July were postponed to at least at the end of August, and some components would not be purchased before the end of the year.

According to industry insiders, Qualcomm has cut about 10%-15%of the Snapdragon 8 series orders, and it is expected that the price of two flagship mobile chips will be reduced by 30%-40%at the end of the year to clear the inventory. MediaTek will reduce the entry -level and mid -range 5G chip orders signed with suppliers in the fourth quarter of 2022 to reduce the order of 30%to 35%; the IDM giant Texas Instrument also notified customers, saying that the imbalance in supply and demand will be alleviated in the second half of the year, and the power supply management chip will be managed by power supply. The simulation IC -headed simulation IC will face a sharp price. Intel CFO said that PC chip income is facing a crisis of decline.

The person in charge of the chip sales department of a listed company in A shares told the First Financial that the consumer market did decrease greatly compared with the same period last year. "Mainly market demand is declining, including MCU, IDU, storage chip, etc. The consumer customers I have contacted, a better company demand may decline at 15%~ 20%, and the almost decline in the company is 50%to 60% ","

In terms of price, the price of some chips is "cut" directly.

According to the electronic component B2B e -commerce platform chip Superman data, the M32F030, F103 series, and M8S003 series of the SEF semiconductor (ST) all showed a steady price reduction. NXP (NXP) 16 -bit MCUS9S12G128AVLFR has fallen to a low level below 100 yuan.

"The market demand is decreasing, and the chip demand has decreased. At the same time, the chip manufacturer's inventory of the chip manufacturer of the consumer market is at a high level. In order to destock, there will be a market strategy of lowering prices." The above person in charge said.

Taking MCU as an example, since this year, the market price of General Consumer MCUs has continued to decline, and the problem of over -demand MCUs has become more prominent. For example, the price of the popular STM32F103RCT6 fell back to double digits from a high level in the first quarter, and the domestic alternative chip brand GD was sold at a low price for sale.

Cai Rongzong, a spokesman for MCU Design Factory Shengqun, recently said that the current factory plus the proxy end inventory for a total of 9 months, which is double the normal level, which affects the shipping in the second half of the year. In the second half of the year, the global economy is still affected by inflation. In addition, clients generally look forward to the price reduction space for MCUs. Therefore, it is estimated that the market conditions of the mid -range consumer MCU will be stabilized until the first half of 2023. 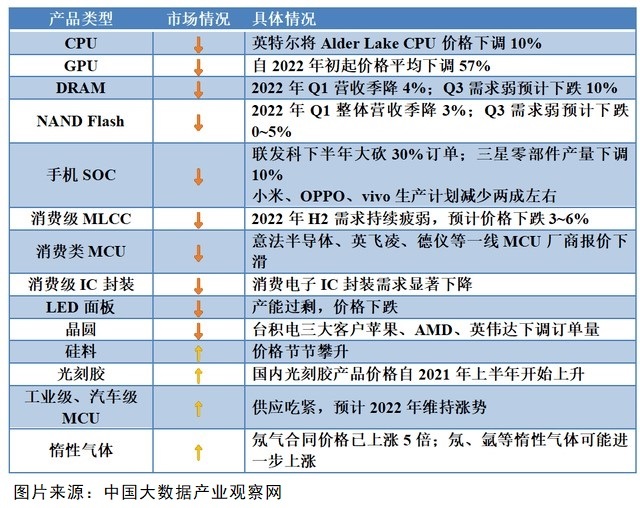 However, the high -end MCU period is still tight, and the MCU chip is still hot. On the whole, car regulatory chips and construction regulations are still popular. "The entire market is still good. One is the chip of photovoltaic and energy storage, the second is automotive electronics, and the third is industrial automation." The person in charge said.

According to the chip Superman, the automotive intelligent power IC-up/lower bridge arm switch VNQ7050AJTR rose from 80 yuan in January this year to 500 yuan in June, in just half a year.

The crisis of a single tide gradually started, and the consumer electronics chip design plant was the most affected.

For chip design companies, you need to find new application scenarios of products to calmly meet the demand for a certain type of market. "Getting on the car" is currently the best way out.

However, "getting on the car" has a high technical threshold and a long certification cycle. "Vehicle -level products need to go through long -term verification, about two years, and the alternative cycle is also long. Auto regulatory products are required to ensure a stable supply cycle of at least 5-10 years." Senate to the First Finance.

At present, domestic manufacturers are accelerating entering the high -end vehicle MCU market. Researchers in an electronics industry in a securities firm told First Financial that "Zhaoyi Innovation (603986.SH), Siwei Tu Xin (002405.SZ) all -funded subsidiary Jiefa Technology, BYD semiconductor and these Enterprises, do the best in the field of MCUs in the domestic car regulations. "

However, the First Finance and Economics learned from the industrial chain that the mainland foundry leader and the overseas foundry factories have no price reduction trend. At present, from the perspective of streaming, the high -feedback cost of South Korea, which occupies 17%to 18%of the world's share, is also relatively tight in the mainland foundry leader Hua Honghong's production capacity. The global foundry Taipo Power has generally increased the price of wafer foundry a few months ago, and there may be a second round of price increases in the near future.

Related news
Hot Chips Summit Lisa Su Lecture: The new thread tearer is on the road
What exactly is Jim Keller thinking about leaving Intel chip God?
TSMC is also spared? Consumer electronic chip or be chopped by big customers
Consumer electronic chip "cutting single tide" spreading core is still hot
Hot news this week
Biden signed a chip and scientific bill, a video call of WeChat iOS internal test suspension window, the advanced CPU caused Win11 to be difficult to use, Huawei new machines enter...
How to regulate the "broken card" operation to crack down on electrical fraud to prevent "accidental injuries" with cards?
Musk's eyes! Lei Jun released a full -size humanoid robot Xiaomi self -developed strength explosion table
Japan has confirmed that China has overtaken the US for the first time in the world's top three indicators of scientific papers
iPad 10 will be absent from iPhone 14 conference: October appeared on Apple's last non -comprehensive tablet tablet!
Kuaishou TOB business Yu Bing: Self -developed chips or mass production after the end of the year, the video must be turned into light industry
The three major indexes of the US stocks opened sharply: ROBLOX fell more than 4%, Twitter and Tesla rose more than 3%
The global streaming media have increased the animation circuit is becoming a new "breakthrough" for Youaiteng
After selling Tesla for $6.9 billion, Musk said he was not selling it, but a survey said he was still selling it. The title of the world's richest man may not be guaranteed next ye...
Meizu Pandaer Great: All products are reduced by 200 and 30 -containing mobile phone cases, heat dissipation back clamps
The most popular news this week
Pet dog infecting monkey acne suspected "Human Poor" American CDC Reform Control Guide
Space Launch System to Fly for First Time
Tencent's second-quarter net profit fell 56% from a year earlier to 18.6 billion yuan
Fabless customers cut back on chip orders affecting Q4 capacity utilization
Washington's suspicion of TIKTOK exacerbated: How will the Bayeon government weigh it?
Pinduoduo launched its cross-border e-commerce platform in the United States in September
Put an SSD in your phone: from 2,499 yuan
China's largest general purpose drone! The first five flights were successful
IPhone 14 to be released alongside Huawei Mate 50: Which bangs do you choose?
Tencent's agent of the Russian war online game announced the suspension: Customs Customs in October