The anchor is "unwilling to break the moral bottom line" 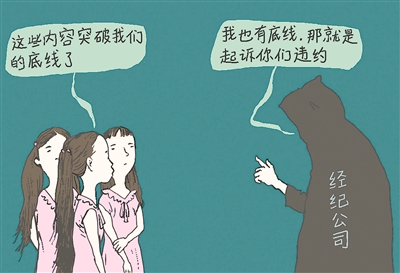 Three post-00s girls signed a cooperation agreement with a company to use the company's short video account to broadcast live, and all resigned a month later. According to the report, the company requires female anchors to meet their "big brother" in private on various social media platforms and get along with them as "boyfriend and girlfriend" or they will be deemed "unqualified" and fined. Three girls said they "don't like this kind of work, and some of the content has broken our moral bottom line". The three were sued by the company for "breach of contract" and claim compensation. Recently, the court of Jialing District in Nanchong, Sichuan Province made a first-instance judgment, rejecting all the lawsuit requests of the company.

In recent years, a large number of network broadcast platforms have emerged, and the number of network anchors has increased rapidly. In the industry, some of the platform and network anchor legal consciousness, values twisted, the moral bottom line, spread the vulgar vulgar content, induce the irrational consumption and large reward, to spread the spread of false information, irresponsible hype social hot and sensitive topic, spread of money worship, hedonism, and even the "reading useless" "appearance level as justice" mistakes such as the thought idea, Harm to the physical and mental health of minors... These illegal and irregular problems occur from time to time, and some anchors even have problems for many times, and they will not change after repeated teaching, seriously disturbing the order of the industry, affecting the healthy development of the industry, and polluting the social atmosphere.

In this context, it is of strong positive significance to view the above three "post-00s" girls as "unwilling to break the moral bottom line". They are not willing to meet the "big brother" (a unified term for the audience in the studio) on social platforms as required by the agency. Unwilling to use the chatting techniques taught by the brokerage company to get along with "big brother" as "boyfriend and girlfriend" or even "talk out feelings"; Unwilling to forward some revealing and sexy photos or videos of women provided by the live broadcast team to the "big brother" in the studio; They are also unwilling to accept the so-called "punishment" of playing games in the broadcast room, so as to attract the compassion of "big brother" and "deal or no deal" for the host broadcast... These are all due "human sobriety".

Anchors with "human sobriety" should be more and more. Not long ago, the National Radio and Television Administration and the Ministry of Culture and Tourism issued the Code of Conduct for Network Anchors, which begins with the statement that "Network anchors shoulder important responsibilities and play an important role in spreading scientific and cultural knowledge, enriching spiritual and cultural life, and promoting economic and social development." Since the role is so important, its body is not right, why right people? Besides, nowadays, the work content of network anchors is almost all-inclusive, far beyond the content scope of traditional radio and television media. They must strengthen their role consciousness, cultivate professional ethics, strengthen social responsibility, standardize their working behavior, and establish a good image, including saying no to excessive requirements of brokerage companies.

For the anchor brokerage company, some people have long suggested that once there are illegal anchors, they should check whether the brokerage company provides brokerage services in accordance with laws and regulations, and whether they instigate or force anchors to break the legal red line, moral bottom line and ethical lower limit to conduct ugly, vulgar, illegal and illegal live broadcasts. For example, the above three post-00s girls will have their chat records publicly checked by the company every day, and will be punished if they fail to meet their "big brother" in talking about their feelings and falling in love. Such brokerage firms should be punished. In addition to delineating clear bottom lines and red lines for network anchors, relevant departments should also establish strict behavior restraint mechanisms and incentive mechanisms for good performance for brokerage companies.

In short, to purify the live broadcast industry, the legal literacy, aesthetic literacy and social responsibility of network anchors and their brokerage companies are indispensable, and relevant departments should strengthen supervision over multiple subjects in the industry. In fact, as netizens become more and more mature, "love anchors" who rely on their appearance and speech skills to attract "big brother" have long been out of favor, while knowledge anchors who focus on quality and skills are becoming more and more popular. The prosperity of "knowledge economy" in livestream rooms has long exceeded that of "hormone economy". Therefore, the live streaming industry should be more "human sober" and jointly create a positive, healthy, orderly, harmonious and clean cyberspace. Comics/Chen Bin

Related news
Samsung The SERIF TV release: 11999 yuan for built-in "environmental screen" model
The linely group's best mobile processor of the year: God u Kirin 810 wins the title
"Generation God U" Kirin 810 gets The Linely Group's annual "Best Cell Phone Processor Chip"
HOW I GOT MY EX BACK WITH THE SPELL OF DR EROMOSE THE GREAT
DR. Murugu IS THE BEST SPELL CASTER ONLINE WHO RESTORED MY B
Hot news this week
Too many questions! Apple has changed the timing of the official release of iOS 16 series
Monkey acne cases have ranked first in the world that the United States has announced the emergency state of public health
Credit card points rule intensive adjustment online transaction points more "valuable"
High reserves and low cost experts: calcium ion batteries replace lithium batteries to stand up to the daily
Alibaba executives interpret financial results: the focus of the consumer side is no longer to attract new, but to do a good job in stratified operation
Losses in a single quarter of $ 23.4 billion a record, SoftBank did not carry the plunge of technology stocks and the devaluation of the yen
Sources say Samsung's Galaxy Z Fold4 is going up in price: a 512GB top unit will cost more than 13,000
The prevention and control of the American Monkey epidemic has failed. What should I pay attention to?
Is the micro -business headache? WeChat friends are suspected to have a big move: 7 can only be posted a week
The new product of Xiaomi MIX is coming: both internal and external dual -screen has been upgraded to make up for the previous generation.
The most popular news this week
AMD Zen4 has a "sweet spot" : The first wave of DDR5 is cannon fodder!
Xiaomi new flagship is issued tonight: the cost of light screen is the top of a Snapdragon 8+ flagship
Huawei Mate 50 September IP14! Multi -device collaborative crushing apples
After selling Tesla for $6.9 billion, Musk said he was not selling it, but a survey said he was still selling it. The title of the world's richest man may not be guaranteed next ye...
Distributed database OceanBase announced 4.0 product release, single -machine deployment performance is super mysql
The three major indexes of the US stocks opened sharply: ROBLOX fell more than 4%, Twitter and Tesla rose more than 3%
Japan has confirmed that China has overtaken the US for the first time in the world's top three indicators of scientific papers
A wake-up call for Apple? Foxconn says it is feeling the sting of slowing demand for smartphones
Joining Chip Alliance could serve as bridge, says South Korean Foreign Minister
Joe Biden also mentioned Chiplet? An unexpected A-share buzzword in A White House briefing