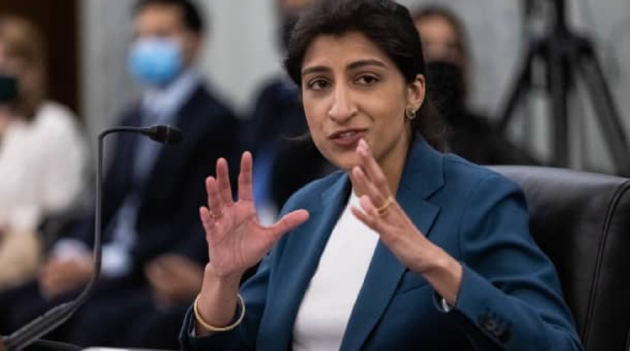 Sina Technology News On the morning of July 28, Beijing time, according to reports, on Wednesday, local time, in a antitrust lawsuit, the Federal Trade Commission (FTC) initiated a lawsuit, asking the court to prevent the Facebook parent company Meta mergers and acquisition of virtual reality fitness software development Business "Within Infinite Company".

It is reported that the goal of the American anti -monopoly female strong woman and FTC chairman Lina Khan took office, to use major challenging antitrust investigations and lawsuits to expand FTC's law enforcement authority. The latest signs show that the goal of Ke Khan is no longer a talked about troops on paper.

In the complaint submitted on the same day, FTC accused that Meta was establishing dominance in an emerging market through the means of mergers and acquisitions. Meta's behavior killed the benign market competition and scientific and technological innovation.

A spokesman for Meta stated in the statement that the FTC's lawsuit was not in fact. The company believed that the merger and acquisition was conducive to the virtual reality market and consumers.

William Kovacic, a former member of the Federal Trade Commission, competed by George Washington University and former member of the Federal Trade Commission, commented that in the law enforcement of M & A transactions in the United States, the prosecution was the historical of the two institutions of the FTC and the Anti -Monopoly Agency of the US Department of Justice. The most important lawsuit.

"This is exactly the antitrust lawsuit that FTC has always promised to carry out."

The two major anti -monopoly law enforcement agencies in the United States are the FTC and the Anti -Monopoly Bureau of the Ministry of Justice. So far, the antitrust lawsuits initiated by these two institutions have occurred during the Trump administration, and the defendants were Meta and Google at the time.

The FTC's lawsuit against META is a milestone incident after Khan in charge of the agency. A few days ago, the US Congress Senate only passed the majority of one vote (this vote came from the US Vice President Harris) to appoint the fifth member of the FTC and Democrat Alvaro Bedoya. Fist.

Previously, Khan and Jonathan Kanter, director of the Anti -Monopoly Bureau of the Ministry of Justice, said that through some challenging lawsuits, trying to expand the border and law enforcement authority of the US antitrust law.

The U.S. Congress is drafting a new anti -monopoly law in the technology industry, but it is still unclear whether this new law can be approved before the August Congress. In the current context, the two major antitrust agencies of the federal government need to expand the existing law's law enforcement authority as much as possible.

In January this year, Khan talked about her view of some challenging lawsuits in the interview.

She said that some antitrust lawsuits may not ensure winning, and the FTC is likely to lose lawsuits, but the risk of risks is actually of great significance. The outside world has seen that in the field of antitrust, regulatory authorities have repeatedly reached a huge price, and FTC will reverse this status quo.

In September, in the memorandum sent to FTC employees, Khan also said that in antitrust law enforcement, FTC must have forward -looking thinking, especially paying attention to the anti -monopoly law enforcement of the next generation of new technology, scientific and technological innovation, and emerging industries.

In the history of development over the past years, Meta has conducted a lot of strategic mergers and acquisitions. The most eye -catching is the two major acquisitions that occurred in 2014. The company bought a photo social networking site Instagram and spent $ 19 billion to acquire mobile chat tools for mobile chat tools WhatsApp.

Some critics pointed out that when the FTC was reviewed the two acquisitions of the year, Meta was lucky enough to pass the level. Without any obstruction, Meta and Zuckerberg got two emerging industry companies that are developing rapidly.

The previous fed FTC of Khan had initiated an independent antitrust lawsuit against META, involving the above two major mergers and acquisitions. FTC accuses Meta's acquisition of potential competitors to expand its monopoly position.

The characteristics of the new lawsuit

The above -mentioned college scholars Corvati said that FTC may have similar backgrounds for META's two lawsuits, but this time Meta's acquisition of Within has some characteristics, which also increases the difficulty of winning a lawsuit.

Costcic said that the merger and acquisition belonged to the integration of vertical fields, and META may use acquisitions to launch the supplementary function of existing products. However, in the case of acquiring Instagram, Instagram may develop into an independent social network in the future and become a direct opponent of the Meta platform.

Corivic said that the FTC's lawsuit should be a "experimental lawsuit." In the future, the FTC and the Anti -Monopoly Bureau of the Ministry of Justice may conduct more challenging lawsuits.

Costcatch mentioned that this time the lawsuit of the acquisition of Within should be the beginning of a series of new lawsuits. These new lawsuits have been carefully planned to test the border of the US antitrust law. Litigation, this is an important step in antitrust supervision. "

Related news
$400 million down the drain? Facebook's VR acquisition is under antitrust investigation
Yuan universe Christmas fire! Meta VR helmet into Americans favorites
Another company to enter VR hardware VR real year?
It's hard to escape the monopoly sanctions American court dismissed Facebook against FTC counterattack
The key META VR header equipment of the Yuan universe game is accused of patent infringement
Amazon has become a thorn in the side of the new chairman of the FTC
Reworking the "Apple Tax" Meta in the metasverse was roundly criticized
Meta: Will continue to look for more acquisition targets despite challenges from U.S. regulators
US FTC enters a more radical antitrust mode: prosecution blocking Meta acquisition of VR manufacturers
Hot news this week
Monkey acne cases have ranked first in the world that the United States has announced the emergency state of public health
Credit card points rule intensive adjustment online transaction points more "valuable"
High reserves and low cost experts: calcium ion batteries replace lithium batteries to stand up to the daily
Alibaba executives interpret financial results: the focus of the consumer side is no longer to attract new, but to do a good job in stratified operation
Losses in a single quarter of $ 23.4 billion a record, SoftBank did not carry the plunge of technology stocks and the devaluation of the yen
The prevention and control of the American Monkey epidemic has failed. What should I pay attention to?
Sources say Samsung's Galaxy Z Fold4 is going up in price: a 512GB top unit will cost more than 13,000
Is the micro -business headache? WeChat friends are suspected to have a big move: 7 can only be posted a week
The new product of Xiaomi MIX is coming: both internal and external dual -screen has been upgraded to make up for the previous generation.
Alibaba's first quarter revenue in the first quarter of fiscal year 2023 was 205.56 billion yuan in net profit of 30.25 billion yuan
The most popular news this week
China Unicom chairman: 5G meals are cheaper than takeout in a single month
The market has voted no to the Chip bill
A net celebrity price of 500,000 yuan to sell its own WeChat court: No!
AMD Zen4 has a "sweet spot" : The first wave of DDR5 is cannon fodder!
Xiaomi new flagship is issued tonight: the cost of light screen is the top of a Snapdragon 8+ flagship
Huawei Mate 50 September IP14! Multi -device collaborative crushing apples
After selling Tesla for $6.9 billion, Musk said he was not selling it, but a survey said he was still selling it. The title of the world's richest man may not be guaranteed next ye...
Distributed database OceanBase announced 4.0 product release, single -machine deployment performance is super mysql
The three major indexes of the US stocks opened sharply: ROBLOX fell more than 4%, Twitter and Tesla rose more than 3%
Japan has confirmed that China has overtaken the US for the first time in the world's top three indicators of scientific papers