The Republican tradition of "opposing government intervention in the market"?

What, chips are an industry that relies heavily on global collaboration?

It matters even less when it comes to suppressing China and advancing American interests.

On Thursday, the House of Representatives followed up the Senate vote with a vote to pass the CHIPS and Science Act. It only needs to be signed by U.S. President Joe Biden, who has been a supporter and advocate of the bill.

The idea behind the long-proposed bill is to use huge government subsidies to push core chipmakers to take sides, forcing them to build factories in the United States and isolating China.

The bill's subsidies total $280 billion. According to a review by Beijing Daily, "The bill combines economic and national security policies, including two important elements of competition with China: one is to provide US $52 billion in subsidies and additional tax credits for US semiconductor companies. The second is to provide about US $200 billion in support for scientific research, especially in cutting-edge fields such as artificial intelligence, robotics and quantum computing."

It is understood that the chip and technology Act aims to be born in 2020 by the chip Act (one Act) of the budget of the investment, including the 52.7 billion dollars of subsidies, the semiconductor chip industry and equipment manufacturing 25% of the investment tax credit, as well as to the wireless broadband technology r&d and other supporting policies, to encourage companies to build factories in the United States.

Its huge subsidies are specifically planned as follows (the maximum amount of subsidies for each project generally does not exceed $3 billion) : 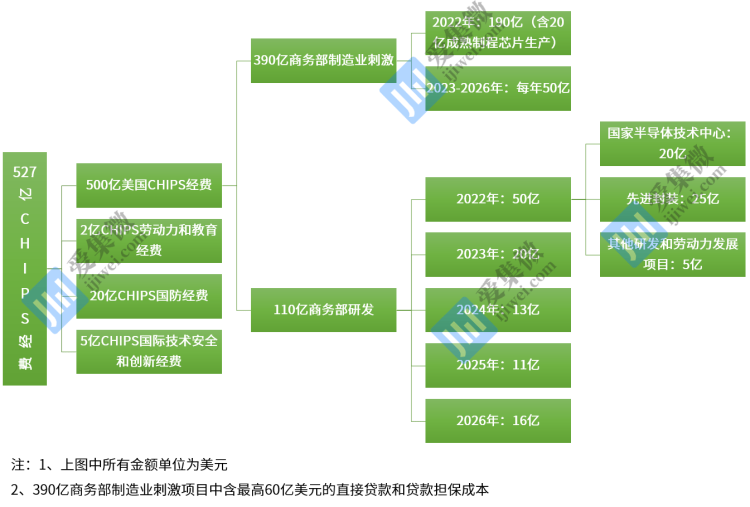 The subsidy is certainly not easy to get. The bill makes no secret of the importance of isolating China as a precondition for receiving these huge subsidies.

According to the bill, the subsidy would prohibit "the expansion or construction of certain advanced semiconductor manufacturing capabilities in specified countries that pose a national security threat to the United States" for a period of 10 years:

"In commerce minister, according to the provisions of this article provide federal financial aid to cover the entity, on or before the date of the covered entity must sign an agreement with the minister, make clear a regulation during the 10 years from the grant date, covering defined entity shall not participate in agreement or other concern of the People's Republic of China national semiconductor manufacturing capability of the substantial expansion of the any big deal."

This is implemented by means of a review every four years:

"The Director of the Office of Science and Technology Policy conducts a review of technology enterprises every four years and specifies the scope and content of the review. The review requirements under this section shall cease ten years after the enactment of this Act."

The ban was basically designed specifically for China, hence the nickname "China guardrail." The Chip and Technology Act grew out of the Bipartisan Innovation Act, also known as the U.S. -China Competition Act. The Bipartisan Innovation Act asserts the need to boost U.S. R&D capabilities in the name of competitive pressures and threats from countries like China, which is mentioned more than 800 times in the text.

The Chip and Technology Act adds that the "China guardrail" is only valid for two exceptions:

Second, although it involves a significant deal to substantially expand semiconductor manufacturing capacity, the deal only involves the production of conventional semiconductors and primarily serves the foreign market of interest.

It should be noted that conventional semiconductor processes are generally 28 nm and above. That also means its reach will be broader. Until then, fabs were at least less constrained to deploy 16 nanometers or more of capacity, as TSMC's Nanking Fab 16 can do. And even with these two exceptions, the Commerce Department must still be notified of major transactions involving such matters during the term of the agreement, leaving considerable room for manoeuvre.

The global semiconductor industry has developed into a multi-billion dollar industry, and the industrial chain has been globalized. The United States, South Korea, Japan, China, Europe and other parties play their respective advantages, are one of the indispensable components of the global semiconductor industry. At present, no country or region in the world can achieve self-sufficiency in semiconductors. According to statistics, the production of some advanced chips includes more than 1,000 processes and requires more than 70 cross-border collaborations to complete.

A researcher, according to the analysis of the root of the so-called chip act, is to use a lot of fiscal subsidies and tax breaks for ways to improve the domestic chip manufacturing capacity, at the same time trying to limit the development of Chinese chip manufacturing industry, but such non-market behavior is bound to destroy the existing global chip industry chain, and is likely to lead to a global chip (especially advanced processing chip) of excess capacity.

A spokesman for China's Ministry of Commerce (MOC) said on Monday that the bill provides huge subsidies to the US chip industry, which is a typical policy to support the industry in a differentiated way. Some provisions restrict the normal economic, trade and investment activities of relevant companies in China, which will distort the global semiconductor supply chain and disrupt international trade. China is highly concerned about this.

Even before the law takes effect, the U.S. is forcing chip manufacturers to take sides between China and the U.S., especially semiconductor manufacturers with investments in mainland China, such as TSMC, Samsung, Intel, Global Wafer, etc. According to US media reports, several of the chip companies have said they will make business decisions in the coming weeks based on receiving assurances that the funds will be forthcoming.

Related news
Semicon China: Huawei and Exxon bring semiconductor intelligent quality inspection and measurement solutions
Sony announces "ready for Playstation 5" Bravia TV lineup
@666 Join illuminati Kingdom in United Kingdom +27839387284
Strong Money Spells in United States (USA) | spiritual rats
here.@ ***
China, U.S. Issue Joint Declaration on Climate Action at GOP26
China to Crack Down on Illegal Fundraising Targetting the Elderly
Pudu Robotics Streamlines Business Operation to“Stay Alive”
Hot news this week
China has found 35 known cases of the new zoonotic virus Langya
Monkey acne cases have ranked first in the world that the United States has announced the emergency state of public health
Credit card points rule intensive adjustment online transaction points more "valuable"
Losses in a single quarter of $ 23.4 billion a record, SoftBank did not carry the plunge of technology stocks and the devaluation of the yen
The prevention and control of the American Monkey epidemic has failed. What should I pay attention to?
Sources say Samsung's Galaxy Z Fold4 is going up in price: a 512GB top unit will cost more than 13,000
Is the micro -business headache? WeChat friends are suspected to have a big move: 7 can only be posted a week
Kuaishou launched a self-developed cloud intelligent video processing chip: The chip has been streamed successfully
The new product of Xiaomi MIX is coming: both internal and external dual -screen has been upgraded to make up for the previous generation.
A new zoonotic virus, Langya, found in China has not yet been confirmed to be transmitted from person to person
The most popular news this week
Mr. Lei: Mr. Bezos apologized to me for not taking good care of Joyo.com
Ever wanted to buy Tencent QQ, Alibaba asked for a stake? Lei jun rumours
Lei Jun's first business thinking book "Xiaomi Entrepreneurship Thinking" was introduced to the latest and most complete Xiaomi methodology summary
Apple's iPhone is no longer a symbol of wealth in China: for reasons to be proud
Xiaomi Motor Autonomous Driving First Show: Automatic Charging of Autonomous Driving in the whole scene
Musk's eyes! Lei Jun released a full -size humanoid robot Xiaomi self -developed strength explosion table
The global streaming media have increased the animation circuit is becoming a new "breakthrough" for Youaiteng
Kuaishou TOB business Yu Bing: Self -developed chips or mass production after the end of the year, the video must be turned into light industry
Lei Jun: Once bid 10 million to buy NetEase was rejected by Ding Lei
Intel burns 23.2 billion won't make a decent graphics card