Second uncle coin responded to run away, Tencent stock price fell back to 5 years ago, Tesla responded to drunk driving by riding shotgun into the street light, on August 1, second...

It's the third day of the seventh lunar month

I was gonna go get a refill today

As a result, Hangzhou recovered nucleic acid for 7 days

I went from expired to four days left 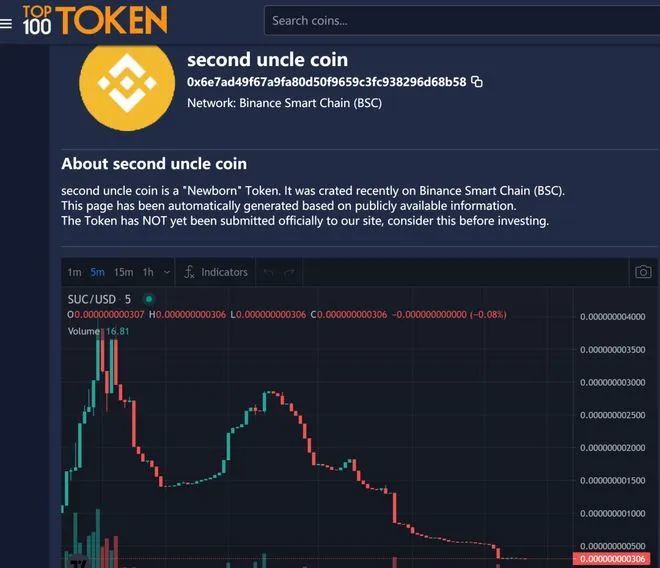 A new digital currency called Second Uncle Coin has emerged, and its issuer is suspected to have run away.

According to Securities Times reports, the network hot Second Uncle coin second Uncle coin pool Rugpull, the contract deployment has been through Tornado Cash to clean the stolen money, recently the SUC price has fallen 99.7%. According to statistics, the total profit of the fraud was as high as $1.3 million.

The official Twitter account of the Second Uncle currency stated that they only transferred 1.3 BNBS, not $1.3 million, and have given the pool access to the black hole address, which is now fully self-governed by the community.

Don't see the wind, it is the rain.

Tencent Holdings shares have fallen back to five years ago 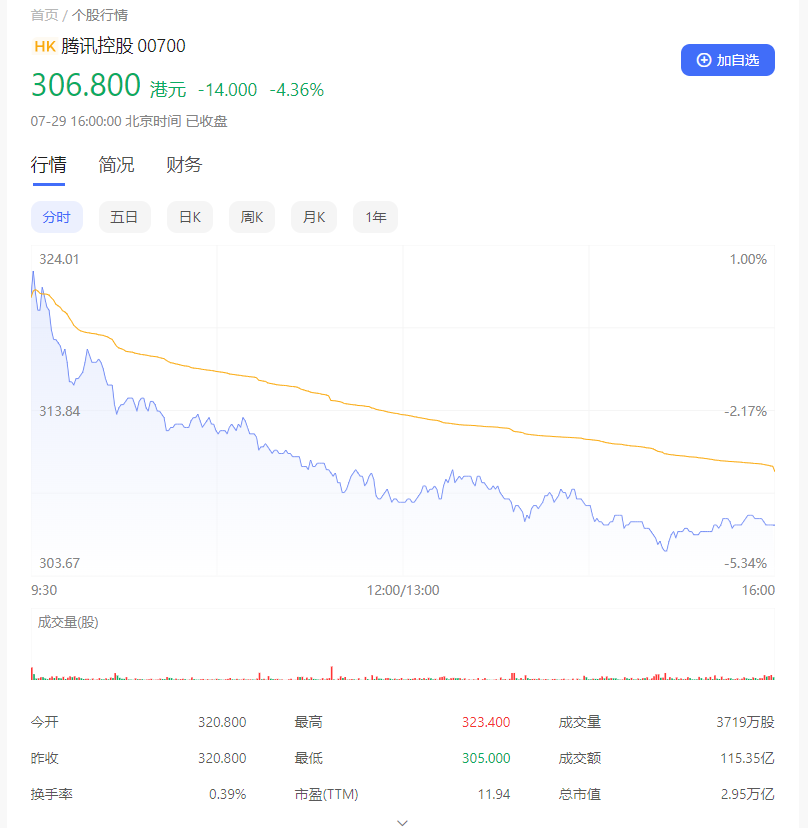 Tencent, China's top Internet player, has seen its share price tumble since early last year. Hong Kong stocks fell broadly on the last trading day of the week, with the Hang Seng Technology Index tumbling nearly 5 per cent, with Tencent Holdings falling 4.36 per cent to close again to the HK $300 mark, almost back to where it was five years ago. It is worth noting that Tencent's share price, which approached an all-time peak of HK $750 more than a year ago, is now down nearly 60 per cent.

: Want to know the mood of those who have tried to fish for the bottom over the past year. 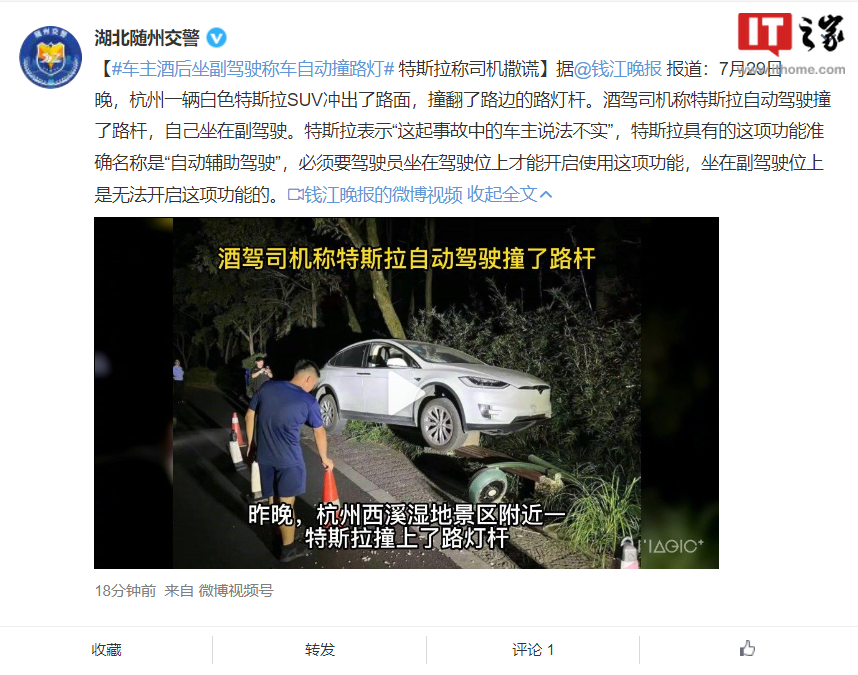 Home of IT, July 31 -- A traffic accident occurred on the night of July 29 near Fudi, a scenic spot of Xixi Wetland in Hangzhou, Zhejiang province, Southern Metropolis Daily reported. Unusually, the owner said he was sitting in the passenger seat.

In response to a question about whether a car owner can sit in the passenger seat to activate the autopilot function, Tesla said: "According to the gravity sensing Settings of the Tesla, the vehicle cannot start unless a person is in the main driver's seat." At the same time, the Tesla official noticed that someone online was using extreme methods, such as placing a heavy object on the main driver's seat, to activate the autopilot function. "We don't recommend it," the official said. "If an accident happens while the car is in autopilot mode, it is still the person's sole responsibility, and according to the Road Traffic Safety Law, the driver should be in the driver's seat."

: I don't think Tesla can do this.

# On August 1st restrictions on second-hand cars will be lifted: the "National Five" can be circulated throughout the country

Not long ago, the Ministry of Commerce and 17 other departments issued the Notice on Several Measures to Invigorate Automobile Circulation and Expand Automobile Consumption (hereinafter referred to as the Notice). The Circular clearly supports the large-scale development of the circulation of used cars, and all regions will strictly implement the policy of completely canceling the relocation restrictions on used cars. Starting from August 1, 2022, restrictions on the relocation of small non-operating used cars that meet the national V emission standards will be lifted nationwide (including in key areas designated by the State for air pollution prevention and control). We will promote the free circulation of used cars and cross-regional operations of enterprises. Yuan.

: One of my colleagues has been craving the S90 Bao Hua Wei Jian for a long time.

Related news
NVIDIA gives up Tesla brand in a low-key way: because of its name collision with famous electric vehicles
JD.com,Tencent Extend Strategic Partnership on AI
Second uncle coin responded to run away, Tencent stock price fell back to 5 years ago, Tesla responded to drunk driving by riding shotgun into the street light, on August 1, second...
Hot news this week
Monkey acne cases have ranked first in the world that the United States has announced the emergency state of public health
Credit card points rule intensive adjustment online transaction points more "valuable"
High reserves and low cost experts: calcium ion batteries replace lithium batteries to stand up to the daily
Alibaba executives interpret financial results: the focus of the consumer side is no longer to attract new, but to do a good job in stratified operation
Losses in a single quarter of $ 23.4 billion a record, SoftBank did not carry the plunge of technology stocks and the devaluation of the yen
The prevention and control of the American Monkey epidemic has failed. What should I pay attention to?
Sources say Samsung's Galaxy Z Fold4 is going up in price: a 512GB top unit will cost more than 13,000
Is the micro -business headache? WeChat friends are suspected to have a big move: 7 can only be posted a week
The new product of Xiaomi MIX is coming: both internal and external dual -screen has been upgraded to make up for the previous generation.
Alibaba's first quarter revenue in the first quarter of fiscal year 2023 was 205.56 billion yuan in net profit of 30.25 billion yuan
The most popular news this week
China Unicom chairman: 5G meals are cheaper than takeout in a single month
The market has voted no to the Chip bill
A net celebrity price of 500,000 yuan to sell its own WeChat court: No!
AMD Zen4 has a "sweet spot" : The first wave of DDR5 is cannon fodder!
Xiaomi new flagship is issued tonight: the cost of light screen is the top of a Snapdragon 8+ flagship
Huawei Mate 50 September IP14! Multi -device collaborative crushing apples
After selling Tesla for $6.9 billion, Musk said he was not selling it, but a survey said he was still selling it. The title of the world's richest man may not be guaranteed next ye...
Distributed database OceanBase announced 4.0 product release, single -machine deployment performance is super mysql
The three major indexes of the US stocks opened sharply: ROBLOX fell more than 4%, Twitter and Tesla rose more than 3%
Japan has confirmed that China has overtaken the US for the first time in the world's top three indicators of scientific papers