Global semiconductor companies such as Samsung Electronics, Intel and TSMC seem to be very concerned about how these subsidies will be distributed as the US Congress recently passed the Chip Act 2022 providing $52 billion to support the US semiconductor industry, BusinessKorea reported on August 1. 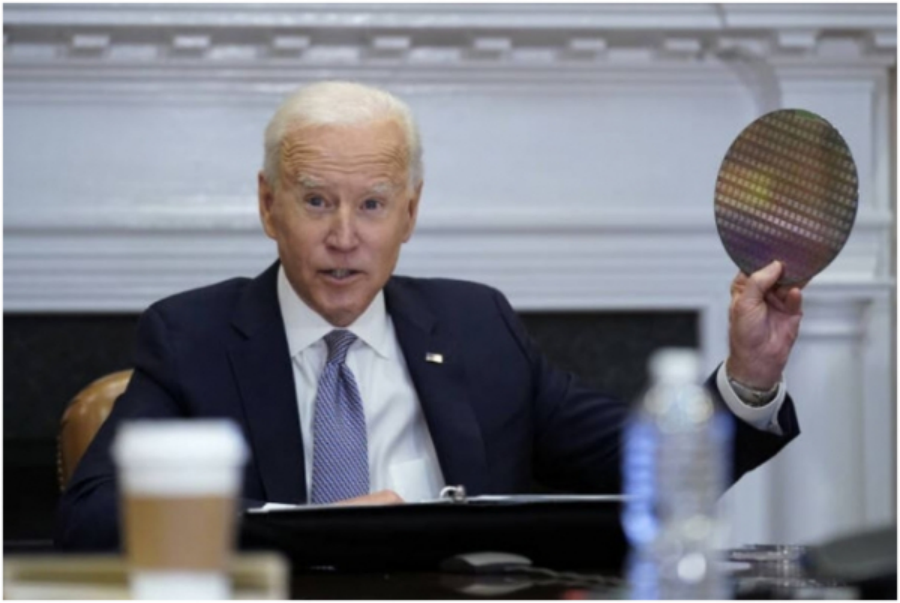 Notes: In April 2021, President Joe & Middot; Joe Biden holds up a semiconductor chip during a video conference on semiconductors at the White House.

The U.S. House of Representatives passed the Chip and Science Act by a vote of 243-187 on July 28 (local time), the report said. The bill had been approved by the Senate the day before and was approved by President Joe Middot. If Biden signs it, it will become a law.

The bill's centerpiece is a $280 billion investment to develop America's high-tech industry.

Samsung Electronics is expected to receive federal subsidies for its $17 billion contract factory in Tyler, Texas, the report said. In addition, SK Hynix plans to invest $15 billion to build a memory semiconductor packaging plant and a semiconductor R&D center in the United States. TSMC announced plans to invest $12 billion in Arizona to make 5nm chips.

According to foreign media reports, there are growing concerns that Intel may use its huge financial resources to lobby the US Congress and take a chunk of the "cake" from it. In the early stages of the bill's discussion, Intel submitted its views to the U.S. government on the need to provide financial support primarily to U.S. chipmakers rather than non-U.S. companies.

However, according to a Commerce Department document released in March, Samsung Electronics submitted an opinion that the U.S. should also support non-U.S. companies and weigh their positive impact on the U.S. economy.

Earlier this year, Intel laid out plans to invest at least $20 billion in the Ohio plant, but the delay in passing the chip bill has indefinitely delayed a planned groundbreaking ceremony. Since then, with the bill passed on July 28, Intel Chief Executive Pat Gelsinger has again expressed a desire to start construction on the Ohio plant. (Proofread/Wu Shouzhe)

Related news
Large-scale advertising fraud? Google off the Baidu DO Global 46 applications
Israel's investment slows down Intel's increased investment in Ireland: 14-nm capacity acceleration
NVIDIA: has no intention of competing with Intel for the CPU market
No subsidies? The three fabs have threatened to cancel plans for their U.S. plants
Intel abandons Optane? Official response
Hot news this week
Too many questions! Apple has changed the timing of the official release of iOS 16 series
Monkey acne cases have ranked first in the world that the United States has announced the emergency state of public health
Credit card points rule intensive adjustment online transaction points more "valuable"
High reserves and low cost experts: calcium ion batteries replace lithium batteries to stand up to the daily
Alibaba executives interpret financial results: the focus of the consumer side is no longer to attract new, but to do a good job in stratified operation
Losses in a single quarter of $ 23.4 billion a record, SoftBank did not carry the plunge of technology stocks and the devaluation of the yen
Sources say Samsung's Galaxy Z Fold4 is going up in price: a 512GB top unit will cost more than 13,000
The prevention and control of the American Monkey epidemic has failed. What should I pay attention to?
Is the micro -business headache? WeChat friends are suspected to have a big move: 7 can only be posted a week
The new product of Xiaomi MIX is coming: both internal and external dual -screen has been upgraded to make up for the previous generation.
The most popular news this week
AMD Zen4 has a "sweet spot" : The first wave of DDR5 is cannon fodder!
Xiaomi new flagship is issued tonight: the cost of light screen is the top of a Snapdragon 8+ flagship
Huawei Mate 50 September IP14! Multi -device collaborative crushing apples
After selling Tesla for $6.9 billion, Musk said he was not selling it, but a survey said he was still selling it. The title of the world's richest man may not be guaranteed next ye...
Distributed database OceanBase announced 4.0 product release, single -machine deployment performance is super mysql
The three major indexes of the US stocks opened sharply: ROBLOX fell more than 4%, Twitter and Tesla rose more than 3%
Japan has confirmed that China has overtaken the US for the first time in the world's top three indicators of scientific papers
A wake-up call for Apple? Foxconn says it is feeling the sting of slowing demand for smartphones
Joining Chip Alliance could serve as bridge, says South Korean Foreign Minister
Joe Biden also mentioned Chiplet? An unexpected A-share buzzword in A White House briefing