People's Daily comments: When will it end?

Talk for a while before bed, there is a world in your dream, listener friends, hello.

An Internet celebrity blogger with millions of followers has appeared in a video cooking what he claims is a 'farm-raised edible' shark. Local authorities confirmed that the shark in the video was a great white shark, a second-class protected animal, after a netizen reported it. At present, the relevant people have been arrested by the police, and the case is being further handled, which has triggered a lot of criticism for the grotesque and bizarre online broadcast and short video content. We'll start with that story today.

On short videos and livestreaming platforms, cooking a great white shark may be unique, but it is not uncommon to find such "delicacies". These content often do not rely on clever cooking and delicious ingredients to win the audience's attention, but rely on images with enough impact. In May last year, a food blogger who ate the second-class protected animal "Conch snail" was detained under the law. The lesson is not far away, why do people still try the law? Some bloggers are obsessed with the novelty and rarity of ingredients to stimulate viewers' curiosity, or even to circumvent the law, probably out of anxiety about traffic. The phenomenon of crossing the line is frequent, which exposes the weak legal awareness and the lack of environmental protection concept of some bloggers. 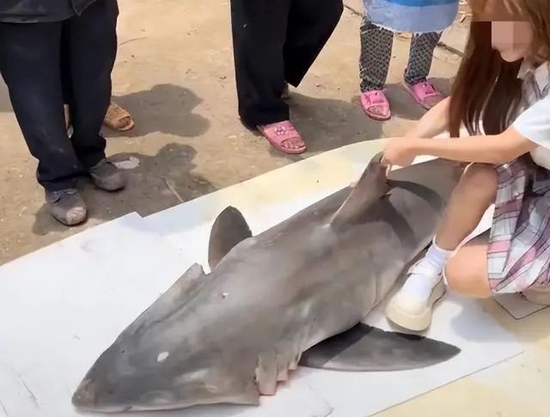 The problem is not confined to the niche of eating and sowing. Many people have seen such content on live streaming and short video platforms: "successful people" in suits and ties talking about the philosophy of life that money comes first; The hoarse shipper, peddling shoddy goods at the "lowest price of the year"; In the name of "friends" "sparring" and so on to play a marginal ball screen, filled with information flow home page... Some red institutions and blogger "color, ugly and strange, false, vulgar," as a password "flow", in the plot of a novelty attract eyeball, with a grandiose acting provoke emotions, trying to earn in the controversial flow, filled with the purse in the question, the result is damage to the user experience, also polluted the network space environment ecosystem.

The confusion reflects the similar dilemma faced by many practitioners in the network broadcast and short video industries. The highly homogeneous content exposes the shortage of creativity and the lack of innovation ability; For sensory stimulation blindly catering, behind the fierce competition between peers and the huge pressure of powder. In the industry, different vertical areas of content are called "track". Bloggers on the "track" rush forward in a rush as if they were running a 100-meter race, but they ignore that this may be a long-distance race that tests their ability and endurance, determination and confidence, and even forget their own goals and directions while running. If blindly what threshold is low to do what, what has the flow of what, and can not find their own positioning and characteristics, and do not focus on improving the quality of content, it is likely to fall into the "only flow" rut, leading to the sword.

The content is a real traffic password, featuring a real powdery artifact. Some people say that there is no shortage of bloggers on network broadcast and short video platforms, but there is a lack of professional and interesting bloggers. There is no lack of content, but there is a lack of quality and distinctive content. To some extent, this speaks to the audience's expectations. On some platforms, videos that record the local conditions and customs of great rivers and mountains and popularize scientific knowledge of heaven and earth have become popular, bloggers who explain the special food recipes from all over the world are popular, and live broadcasts that share the highlights of ordinary life and ingenious ideas have many likes... What these contents have in common is sincere love, solid foundation, valuable "dry goods", and the resulting unique temperament and style characteristics. It is possible to imagine that with more innovation and creativity and less cookie-cutter template application, and more refined products and less crude production following the trend, the content ecology of network broadcast and short video will be richer and better.

Cyberspace is the spiritual home of hundreds of millions of people. Relevant departments have been taking action to address the chaos in online live broadcasts and short videos. Since April this year, a three-month special action aimed at "color, ugly, strange, fake, vulgar, gambling" and other illegal content presented chaos, strict control of dysfunctional function, "Internet red chaos", malicious marketing and other prominent problems, promote network broadcast, short video industry information content present appearance to achieve a preliminary change. The Code of Conduct for Network Anchors issued not long ago systematically and comprehensively regulates the behavior of network anchors, which is helpful to improve the overall quality of network anchors and standardize the order of the industry. Strengthen the construction of network anchors' professional ethics, every practitioner abide by the law, set an example, upward to the good, so that there is no escape from chaos, so that the cyberspace is clear.

Flow is very important, take it also has a way.

Related news
I've sold train tickets for pinduoduo, and I want to call you "pinduoduo" for playing and accommodation. I didn't think of daily
Hot news this week
Monkey acne cases have ranked first in the world that the United States has announced the emergency state of public health
Credit card points rule intensive adjustment online transaction points more "valuable"
High reserves and low cost experts: calcium ion batteries replace lithium batteries to stand up to the daily
Alibaba executives interpret financial results: the focus of the consumer side is no longer to attract new, but to do a good job in stratified operation
Losses in a single quarter of $ 23.4 billion a record, SoftBank did not carry the plunge of technology stocks and the devaluation of the yen
The prevention and control of the American Monkey epidemic has failed. What should I pay attention to?
Sources say Samsung's Galaxy Z Fold4 is going up in price: a 512GB top unit will cost more than 13,000
Is the micro -business headache? WeChat friends are suspected to have a big move: 7 can only be posted a week
The new product of Xiaomi MIX is coming: both internal and external dual -screen has been upgraded to make up for the previous generation.
Alibaba's first quarter revenue in the first quarter of fiscal year 2023 was 205.56 billion yuan in net profit of 30.25 billion yuan
The most popular news this week
China Unicom chairman: 5G meals are cheaper than takeout in a single month
The market has voted no to the Chip bill
A net celebrity price of 500,000 yuan to sell its own WeChat court: No!
AMD Zen4 has a "sweet spot" : The first wave of DDR5 is cannon fodder!
Xiaomi new flagship is issued tonight: the cost of light screen is the top of a Snapdragon 8+ flagship
Huawei Mate 50 September IP14! Multi -device collaborative crushing apples
After selling Tesla for $6.9 billion, Musk said he was not selling it, but a survey said he was still selling it. The title of the world's richest man may not be guaranteed next ye...
Distributed database OceanBase announced 4.0 product release, single -machine deployment performance is super mysql
The three major indexes of the US stocks opened sharply: ROBLOX fell more than 4%, Twitter and Tesla rose more than 3%
Japan has confirmed that China has overtaken the US for the first time in the world's top three indicators of scientific papers