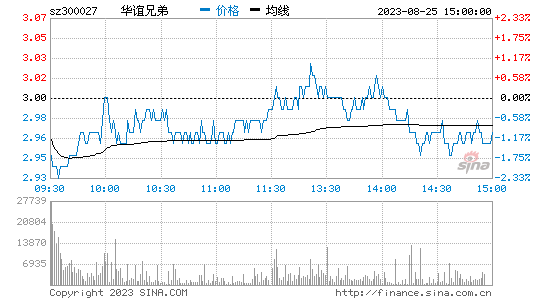 On the evening of August 5, Huayi Brothers announced that Shenzhen Tencent Computer System Co., LTD., a shareholder holding more than 5%, had accumulated through bulk trading and participated in securities lending from August 2 to August 4, 2022, leading to a change in its shareholding ratio of more than 1%.

Tencent's stake in Huayi fell to 4.99% from about 7.94%. After the change, Tencent Computer is no longer a 5 percent shareholder in Huayi Brothers.

Tencent has held shares for more than 10 years

According to the announcement issued by Huayi Brothers in May 2011, the company's shareholders Ma Yun, Yu Feng, Jiang Nanchun, Gao Min and Wang Yulian sold a total of 27.8 million shares of the company on May 6, 2011 through bulk trading, at a selling price of 16 yuan per share, accounting for 4.6% of the total capital of the company. 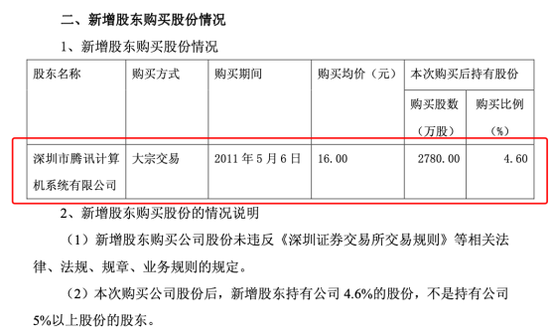 Since then, Tencent has repeatedly added capital to Huayi Brothers.

Since 2015, Tencent's stake has fallen to about 7.94% due to stock option exercises and other matters. But Tencent did not reduce its stake in Huayi Brothers until August.

From August 2 to 4, Tencent reduced its stake in Huayi Brothers by 53.89 million shares, accounting for 1.94 percent of the company's total capital stock, at an average price of 2.2 yuan per share, according to the announcement. In addition, Tencent lent 27.745 million shares through its participation in Rongtong Securities, reducing its stake in the company by about 1 percent.

Together, the number of reduced shares reached 81.638 million, accounting for 2.94% of the total capital of Huayi Brothers.

Since 2015, Huayi Brothers' share price has been "falling and falling". From the price of the reduction, Tencent in Huayi Brothers investment, it is a heavy loss. 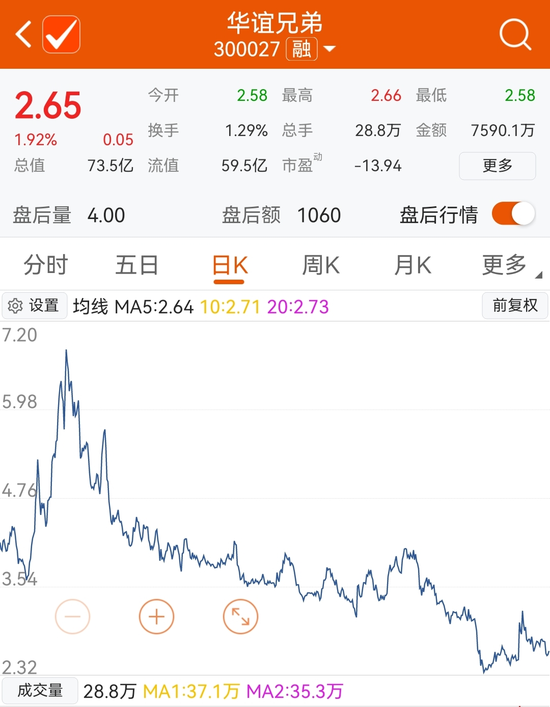 The sale brings Tencent's total stake in Huayi Brothers to less than 5%. However, Tencent's stake would still exceed 5 per cent if the roughly 1 per cent of Huayi Brothers shares involved in the Rerongtong securities loan business were recovered after the loan period.

Huayi Brothers has an opulent roster of shareholders. Before Tencent, Alibaba had invested in Huayi Brothers. After the listing of Huayi Brothers, "Ali" and many times to increase the capital of Huayi brothers.

By the end of 2021, Hangzhou Ali Venture Capital Co., Ltd. held 4.47% of Huayi Brothers' shares, making it the third largest shareholder of the company. Together with Mr Ma's 3.6 per cent stake, the Alibaba group holds more than 8 per cent.

Huayi Brothers is one of the few companies to be invested by both Alibaba and Tencent, and its "luxury circle of friends" has become one of its advantages in the film industry.

Huayi brothers has previously said in a statement, the company accumulated in many years of business development in a number of long-term and stable strategic partnership, in addition to major cinema, television, video web site, and the international film company, tencent, ali, and peace, such as the Internet ecological and financial companies, these partners trust and support, To a certain extent, constitute the resource guarantee of the company's leading position.

In terms of actual business cooperation, however, Huayi Brothers has a closer relationship with Tencent.

Again in November 2014, the two sides signed a "strategic cooperation framework agreement, the agreement in the business areas for a variety of game mode of cooperation, establish a regular high-level communication mechanism, and actively explore tencent game platform and huayi brothers business of various cooperation modes, and through such cooperation to help the development of huayi brothers games business.

In recent years, the two sides have cooperated in the production and distribution of many films and TV dramas. Tencent has almost always been among Huayi's top five customers, according to company announcements.

In recent years, due to the influence of multiple factors, Huayi Brothers' operating conditions have deteriorated, with consecutive losses in performance and continuous decline in stock price. However, Alibaba and Tencent continued to support Huayi Brothers until 2020.

In April 2020, Huayi Brothers issued a private placement plan, which planned to issue 824 million shares at the price of 2.78 yuan per share, raising no more than 2.29 billion yuan.

But the offering didn't go well. After many revisions and reviews, the target of the issue has been changed from the initial 9 companies to no more than 35 specific targets. But so far, the matter is still moving forward.

Related news
Why does "one more thing" Apple make its own chips?
JD.com,Tencent Extend Strategic Partnership on AI
Tencent CSIG Creates Enterprise & Government Business Line
Hot news this week
Monkey acne cases have ranked first in the world that the United States has announced the emergency state of public health
Credit card points rule intensive adjustment online transaction points more "valuable"
High reserves and low cost experts: calcium ion batteries replace lithium batteries to stand up to the daily
Alibaba executives interpret financial results: the focus of the consumer side is no longer to attract new, but to do a good job in stratified operation
Losses in a single quarter of $ 23.4 billion a record, SoftBank did not carry the plunge of technology stocks and the devaluation of the yen
The prevention and control of the American Monkey epidemic has failed. What should I pay attention to?
Sources say Samsung's Galaxy Z Fold4 is going up in price: a 512GB top unit will cost more than 13,000
Is the micro -business headache? WeChat friends are suspected to have a big move: 7 can only be posted a week
The new product of Xiaomi MIX is coming: both internal and external dual -screen has been upgraded to make up for the previous generation.
Alibaba's first quarter revenue in the first quarter of fiscal year 2023 was 205.56 billion yuan in net profit of 30.25 billion yuan
The most popular news this week
China Unicom chairman: 5G meals are cheaper than takeout in a single month
The market has voted no to the Chip bill
A net celebrity price of 500,000 yuan to sell its own WeChat court: No!
AMD Zen4 has a "sweet spot" : The first wave of DDR5 is cannon fodder!
Xiaomi new flagship is issued tonight: the cost of light screen is the top of a Snapdragon 8+ flagship
Huawei Mate 50 September IP14! Multi -device collaborative crushing apples
After selling Tesla for $6.9 billion, Musk said he was not selling it, but a survey said he was still selling it. The title of the world's richest man may not be guaranteed next ye...
Distributed database OceanBase announced 4.0 product release, single -machine deployment performance is super mysql
The three major indexes of the US stocks opened sharply: ROBLOX fell more than 4%, Twitter and Tesla rose more than 3%
Japan has confirmed that China has overtaken the US for the first time in the world's top three indicators of scientific papers