A new zoonotic virus, Langya, found in China has not yet been confirmed to be transmitted from person to person

Recently, the world's leading medical journal New England Medicine (NEJM) published a joint communication article between Chinese and Singaporean scientists. It reported that a new type of animal-derived Henipavirus that can infect humans was found to be avirus in Shandong and Henan provinces of China.

Henipa virus is one of the major emerging causes of zoonosis in the Asia-Pacific region, with a fatality rate between 40% and 75%.There is no vaccine or treatment for Henipa virus. The only treatment is supportive care to control complications.

In the study, the scientists, during sentinel surveillance of febrile patients in eastern China with a history of recent animal exposure,A new strain of Henipa virus was identified in a throat swab sample from a patient and named Langya virus (LayV).

The genome of LayV consists of 18,402 nucleotides and has the same genomic organization as other Henipaviruses.

In phylogenetic tree, this strain was found to be a new strain, which was most related to Henipa virus previously discovered in Mojiang, Yunnan Province.

A subsequent investigation found thatThirty-five patients with acute LayV infection were identified in Shandong and Henan provinces of China, 26 of which were infected only with LayV (no other pathogens were detected). The clinical symptoms of these 26 patients were fever (100%), fatigue (54%), cough (50%), anorexia (50%), myalgia (46%), nausea (38%), headache (35%), vomiting (35%), Thrombocytopenia (35%), leukopenia (54%), impaired liver function (35%) and renal function (8%) were associated.

In addition, serological studies of domestic animals showed positive serum antibodies in goats (3/168 [2%]) and dogs (4/79 [5%]). Among the 25 wild small mammal species studied, LayV RNA was detected mainly in shrews (71/262 [27%]), a finding that suggests that shrews may be a natural host of LayV.

Although previous reports suggested human-to-human transmission of Henipa virus, the investigators noted that no significant spatial or temporal clustering of cases and LayV haplotypes was observed. In other words,It has not been determined whether LayV can be transmitted from person to person. 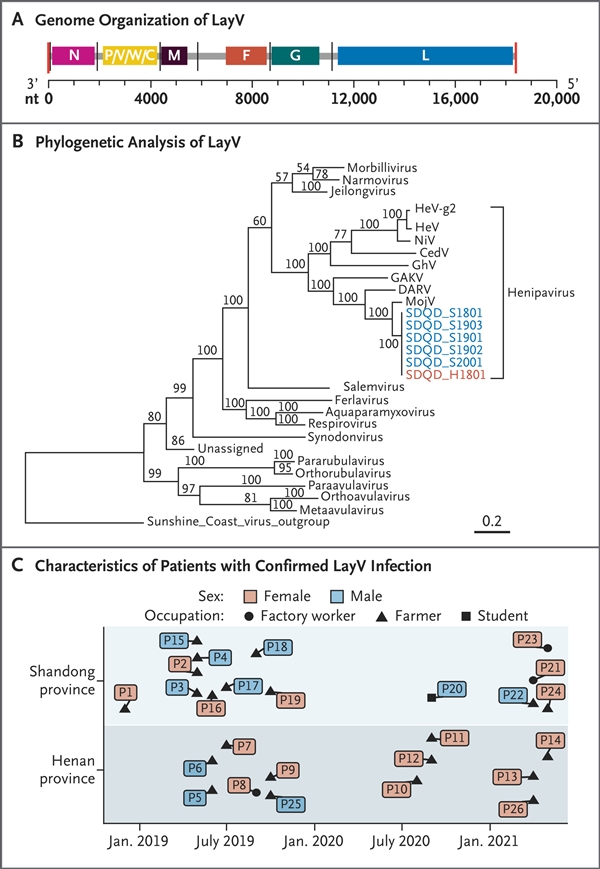 Figure A shows &LDQUO Reed {langya} & throughout; Genome structure of a virus (LayV). The figure is drawn to scale and the scale bar is shown at the bottom. The abbreviation NT stands for nucleotide.

Figure B shows &LDQUO Reed {langya} & throughout; Phylogenetic analysis of viruses. The tree was constructed using maximum likelihood based on the complete amino acid sequences of RNA-guided RNA polymerases from LayV and other recognized species in the paramyxoviridae family.

Related news
HIV CURE FOUND
HERPES CURE FOUND
Glory high-tech products help team China's national team set out to show China's business card to the world
HOW I GOT CURED TOTALLY FROM HERPES VIRUS
Apple Doubles Clean Energy Suppliers in China
Popular Hot Pot Restaurant Brand Haidilao to Shut Down 300 Restaurants in China
China Removes Covid-19 Risk Indicator from Travel Record, Further Easing Restrictions
Telecom Operators Essential for the Metaverse:China Mobile Chairman
China has found 35 known cases of the new zoonotic virus Langya
Hot news this week
According to sources, SoftBank founder Masayoshi Son has not made a proposal to Samsung to invest in Arm
Brother sent a mobile phone to pay 200 yuan to pay the owner to the police: money is not scraped by the wind
China Confinement Association said on the rumor of Haitian soy sauce "dual standard": support enterprise rights protection
Mate 50 Kunlun version is in short supply! Huawei additional production capacity: October supply can improve
Apple iPhone 14 / Pro blessing, optical lens supplier Datu Guang's revenue in September 22 months new high
After a lapse of 28 years, the Chinese women's basketball team won the World Cup runner -up Li Meng's T -shirt on fire
IPhone6 officially "retired", its series sold 250 million units, second-hand purchase price is now as low as 100 yuan......
Apple responds to the iPhone accident monitoring cannot be triggered 100%: no minimum requirements are met
The revenue of Ruiyu, a major network chip manufacturer, was about 2.156 billion yuan in September, down 1.85 percent year on year
Meituan Wang Xing: Chinese auto companies will definitely win, "NIO, Huawei, ideal" will replace BBA to occupy the high-end market
The most popular news this week
Foxconn has announced that it will contract manufacture electric cars and build prototypes for INDIEV in Ohio
Latest ranking: Huawei first, ZTE fourth!
Ding Yun, vice chairman of the Huawei Supervisory Board, died of a sudden illness Huawei: He expressed deep condolences to his unfortunate death
European Union antitrust regulators have questioned Microsoft to see if it can compete fairly after buying Activision Blizzard
Today, I took a set of online signals to compare it ...
Xiaomi 13 series of news summary: a total of 3 model Snapdragon 8 Gen2 blessing
Musk wants to turn Twitter into wechat, but he may struggle to pull it off
Three o'clock before the Apple Officer who can hit the 20 % off. Before buying the machine
When playing games, I interact with my boyfriend too close: the girl after the 1 00 of foreign countries will hurt her sister
Wolf on mobile? Chinese copycat "The Phantom Wolf: Darkest Hour" hits shelves