Losses in a single quarter of $ 23.4 billion a record, SoftBank did not carry the plunge of technology stocks and the devaluation of the yen 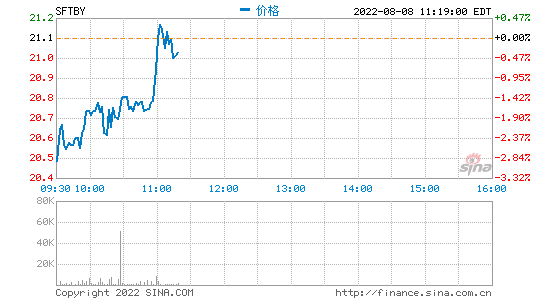 "This is the biggest loss since the establishment of the company!" SoftBank Chairman and CEO Sun Zhengyi said at the financial report conference that the current situation may be worse than June. 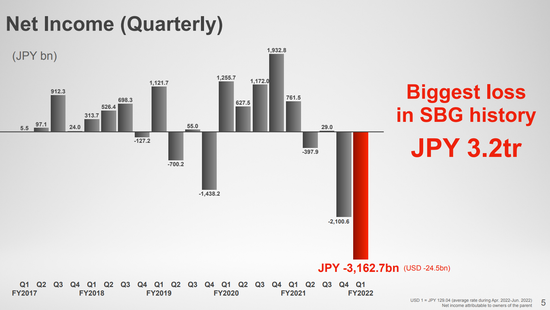 On August 8th, SoftBank Group released the financial report in the first quarter of fiscal year in 2022 (Note: April-June). According to the financial report, the net sales of SoftBank's first quarter of fiscal quarterly were 157.72 trillion yen (about 11.625 billion US dollars), an increase of 6.3%year -on -year; (About $ 23.388 billion). The comparison is even more tragic that the net profit was 761.509 billion yen in the same period last year.

The main loss of this loss was SoftBank Vision Fund, which caused 29191 trillion yen (about 21.586 billion US dollars) investment losses. In the financial report, SoftBank Group attributed the cause of losses as the plunge of technology stocks and the share value caused by the devaluation of the yen.

Specifically, the SoftBank Vision Fund Phase I (SVF1) holds a total of 80 investments (excluding exit), including 23 listed companies. Due to the decline in global stock prices, the fair value decreased, and the unrealized valuation loss (net) of SVF1 listed investment portfolios was $ 6.8 billion.

Among them, the Korean e -commerce giant Coupang floated $ 2.37 billion, Shangtang Technology (0020.HK) floated $ 1.75 billion, and the loss of US $ 1.6 billion in US takeaway platform DOORDASH. For non -listed companies, due to comparable companies' stock price declines, the unrealized valuation loss (net) record of SVF1 records totaled 2.19 billion US dollars.

At present, in addition to actively promoting the ARM listing plan, SoftBank Group has made financing through Ali stock prepaid long -term contracts (a derivative) in order to meet the needs of liquidity. By preparation for forward contracts, SoftBank can immediately raise cash, while retaining the possibility of continuing to hold shares (ie, repurchase).

However, as Alibaba's stock price rose, prepaid long -term contracts caused a loss of US $ 1.9 billion.

In order to change this situation, Sun Zhengyi said that he would take three major measures to greatly reduce operating costs, increase the standards for new investment, and increase the value of the current investment portfolio.

However, after such a big blow, Sun Zhengyi still believes that in the existing investment, it is still possible to bred the next Alibaba. Under the pressure, he said that he would continue to take greater investment risks and pursue the goal of vision. "These investment portfolios give me a deep impression, and I continue to believe in them."

Related news
Gu Geyun's purchase price of cornerstone technology is unknown
Google cloud has acquired cornerstone technology and the price has not been disclosed
HOW I GOT MY EX BACK WITH THE SPELL OF DR EROMOSE THE GREAT
Top Secret Way To Win Lottery With The Help Of A Magic spell
I NEED MY EX BACK WITH THE HELP OF A SPELL CASTER 2021
I NEED MY EX BACK WITH THE HELP OF A REAL SPELL CASTER 2021
I Need my ex back with the help of a spell caster
I Need My Ex Back With The Help Of A Spell Caster 2021/2022
Losses in a single quarter of $ 23.4 billion a record, SoftBank did not carry the plunge of technology stocks and the devaluation of the yen
Hot news this week
According to sources, SoftBank founder Masayoshi Son has not made a proposal to Samsung to invest in Arm
Brother sent a mobile phone to pay 200 yuan to pay the owner to the police: money is not scraped by the wind
Mate 50 Kunlun version is in short supply! Huawei additional production capacity: October supply can improve
After a lapse of 28 years, the Chinese women's basketball team won the World Cup runner -up Li Meng's T -shirt on fire
China Confinement Association said on the rumor of Haitian soy sauce "dual standard": support enterprise rights protection
IPhone6 officially "retired", its series sold 250 million units, second-hand purchase price is now as low as 100 yuan......
Apple iPhone 14 / Pro blessing, optical lens supplier Datu Guang's revenue in September 22 months new high
Apple responds to the iPhone accident monitoring cannot be triggered 100%: no minimum requirements are met
Meituan Wang Xing: Chinese auto companies will definitely win, "NIO, Huawei, ideal" will replace BBA to occupy the high-end market
The revenue of Ruiyu, a major network chip manufacturer, was about 2.156 billion yuan in September, down 1.85 percent year on year
The most popular news this week
European Union antitrust regulators have questioned Microsoft to see if it can compete fairly after buying Activision Blizzard
Today, I took a set of online signals to compare it ...
Xiaomi 13 series of news summary: a total of 3 model Snapdragon 8 Gen2 blessing
Musk wants to turn Twitter into wechat, but he may struggle to pull it off
Three o'clock before the Apple Officer who can hit the 20 % off. Before buying the machine
When playing games, I interact with my boyfriend too close: the girl after the 1 00 of foreign countries will hurt her sister
Wolf on mobile? Chinese copycat "The Phantom Wolf: Darkest Hour" hits shelves
The era of bangs may be over! Apple's iPhone 15 series is a collective change
Domestic prestige! The storage chip collapses thoroughly!
China University of Science and Technology discovered that the existence of Phosphorus in Titan can provide potential extraterrestrial life