Google is at it again, this time over text messaging.

On August 9, The local time, Google released a special topic called "Get The Message" on The Android official website to Apple, hoping that Apple can improve The cross-device SMS communication between Apple users and Android users, calling on Apple to give up The old SMS and MMS communication methods. Use "modern industry standard" RCS (Rich Media Communication Services).

Google said text bubbles will be green when Android users and Apple users send text messages across devices, instead of the normal blue bubbles, and that video quality will be heavily compressed, return receipt reading will not be displayed, and messages will not be encrypted. 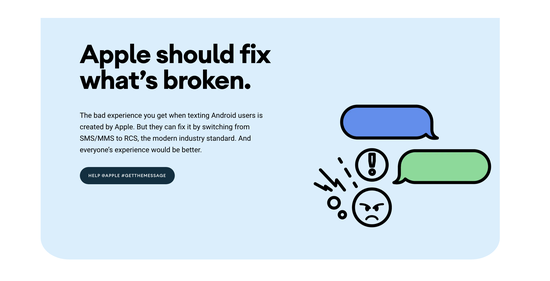 Google said that because iMessage, Apple's messaging system, is not available on Android, Android and iPhone users can only send messages using old-fashioned SMS and MMS communications technology, rather than using WiFi or cellular data networks.

SMS refers to the text messaging service. An SMS message can only contain a maximum of 160 bytes (about 80 Chinese characters). MMS refers to multimedia short message service, also known as MMS. Although MMS supports the transfer of photos, videos, and audio messages, it can only transmit small files, so files sent over MMS are usually compressed.

That leaves Apple and Android users unable to stream high-definition videos and pictures to each other, and unable to tell if messages have been read. Google said these factors significantly affected the user experience and prevented Android users from communicating properly with Apple users.

Google has come up with a solution to this problem. It wants Apple to ditch SMS and MMS and use RCS (Rich Communication Suite).

RCS is a communication method proposed by the Global System for Mobile Communications Association (GSMA) in 2008, which integrates voice, video, location services and other communication services. Like text messaging, RCS allows you to instantly build a social network without adding friends.

But compared with traditional text messages (SMS) and MMS, RCS supports sending high-definition pictures, group chats and video calls, as well as displaying a read receipt and typing indicators (such as "the other party is typing").

Google started pushing for RCS back in 2015 and gradually required Android models to be certified to the RCS standard. As of now, most Android models are already compatible with RCS.

However, Apple didn't take that advice. According to a Wall Street Journal report in January, Apple said its closed encryption system protects information from hackers and that RCS, while making it easier for Apple users to communicate with Android users, would weaken Apple's "walled garden."

In addition to the messaging issues mentioned above, Google also pointed out that Apple uses the color of the text bubble to distinguish users between models -- when Apple users send messages to each other using iMessage, the text bubble appears blue, while text bubbles from Android users appear green. 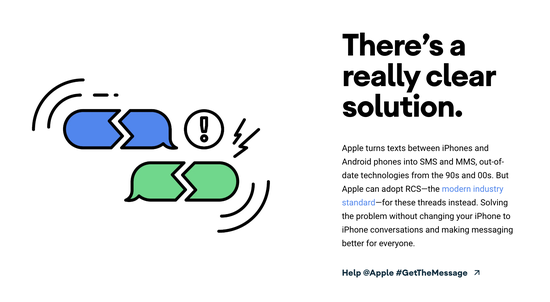 Lockheimer called it "peer pressure" and "green bullying" and spoke out against Apple, saying that "using 'peer pressure' and 'green bullying' to sell products is inappropriate and hypocritical for a company whose core values are humanity and fairness."

Lockheimer also took the opportunity to call on Apple to use RCS, saying the technology could solve the blue-green bubble problem and improve the communication experience between iPhone and Android users. 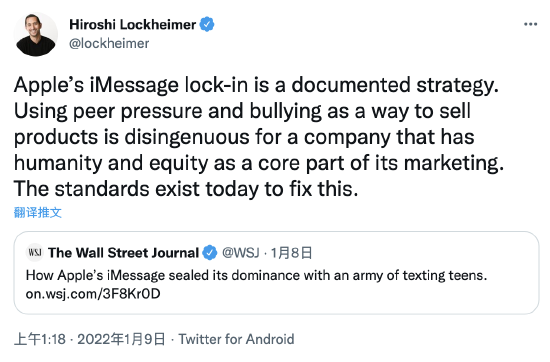 In June, American rapper Drake released a new song, "Texts Go Green," which Google used as an opportunity to highlight the distinctive Green bubble between Apple and Android users and call for Apple to use RCS. 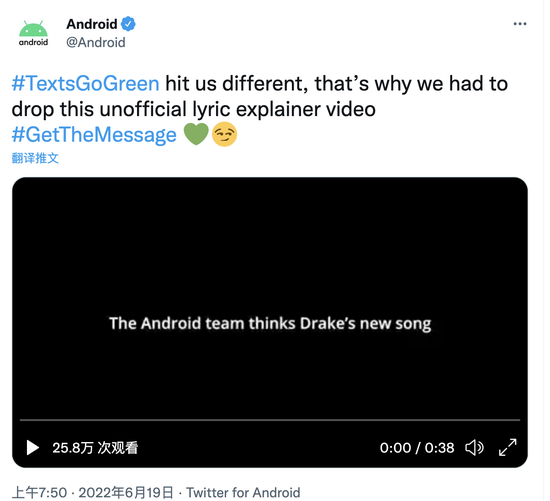 Related news
Apple teamed up with Burberry to develop a retail messaging application called R Message
Google launches app quality to help developers build higher quality Android Applications
Hot news this week
According to sources, SoftBank founder Masayoshi Son has not made a proposal to Samsung to invest in Arm
Brother sent a mobile phone to pay 200 yuan to pay the owner to the police: money is not scraped by the wind
China Confinement Association said on the rumor of Haitian soy sauce "dual standard": support enterprise rights protection
Mate 50 Kunlun version is in short supply! Huawei additional production capacity: October supply can improve
Apple iPhone 14 / Pro blessing, optical lens supplier Datu Guang's revenue in September 22 months new high
After a lapse of 28 years, the Chinese women's basketball team won the World Cup runner -up Li Meng's T -shirt on fire
IPhone6 officially "retired", its series sold 250 million units, second-hand purchase price is now as low as 100 yuan......
Apple responds to the iPhone accident monitoring cannot be triggered 100%: no minimum requirements are met
The revenue of Ruiyu, a major network chip manufacturer, was about 2.156 billion yuan in September, down 1.85 percent year on year
Meituan Wang Xing: Chinese auto companies will definitely win, "NIO, Huawei, ideal" will replace BBA to occupy the high-end market
The most popular news this week
Foxconn has announced that it will contract manufacture electric cars and build prototypes for INDIEV in Ohio
Latest ranking: Huawei first, ZTE fourth!
Ding Yun, vice chairman of the Huawei Supervisory Board, died of a sudden illness Huawei: He expressed deep condolences to his unfortunate death
European Union antitrust regulators have questioned Microsoft to see if it can compete fairly after buying Activision Blizzard
Today, I took a set of online signals to compare it ...
Xiaomi 13 series of news summary: a total of 3 model Snapdragon 8 Gen2 blessing
Musk wants to turn Twitter into wechat, but he may struggle to pull it off
Three o'clock before the Apple Officer who can hit the 20 % off. Before buying the machine
When playing games, I interact with my boyfriend too close: the girl after the 1 00 of foreign countries will hurt her sister
Wolf on mobile? Chinese copycat "The Phantom Wolf: Darkest Hour" hits shelves